This is how ESPN’s annual Body Issue gets made

Chatting with ESPN about ten years of getting elite athletes naked for the Body Issue. 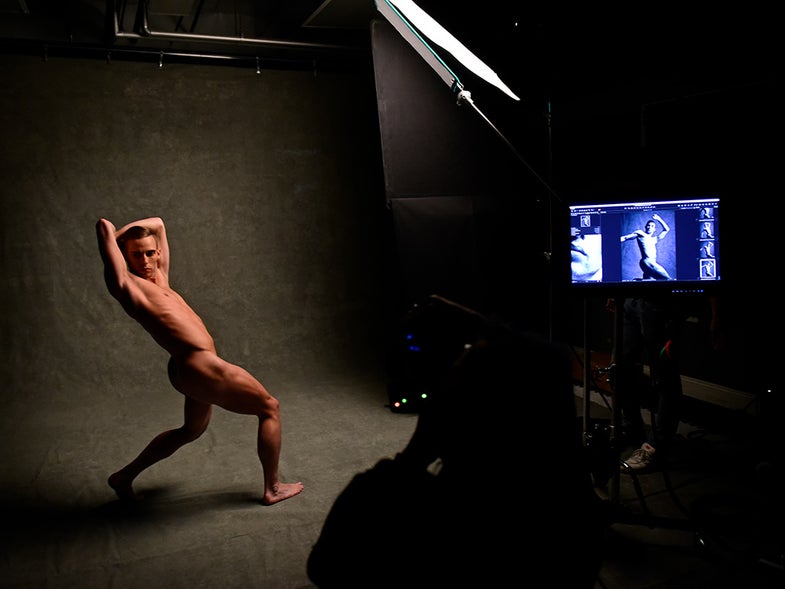 “I couldn’t have done this [shoot] while I was in the closet. I think that, with my experience of coming out, I felt so liberated in so many ways.” - Adam Rippon, figure skater, 2018 Olympic bronze medalist. ESPN The Magazine/Photo by Eric Lutzens
SHARE

For the last decade ESPN Magazine has been convincing some of the world’s most elite athletes from a to shed their uniforms—and everything else—for its annual Body Issue. Past issues have included immaculate nude images of tennis star Serena Williams, Olympic medalist Aly Raisman and NFL free agent Colin Kaepernick. The issue has become an anticipated reveal for sports and photography fans alike.

We caught up with ESPN’s Director of Photography, Karen Frank, to learn more about what it takes to pull off these shoots.

Pop Photo: When do you start planning for The Body Issue?

Karen Frank: It is pretty much a year round thing. After the issue closes we’re already looking ahead to the following year. We’re starting to figure out who the athletes are that we are going to be shooting, although we don’t usually find that out until around January. Between the end of June when the issue comes out and the beginning of the year, we’re looking at websites, talking to photographers, and trying to see who we will want to have shoot for us the following year. The shoots get going around January—it’s about a six month process.

Pop Photo: How do you decide which photographers will be paired with which athletes?

Karen Frank: When we get our roster of athletes, we take a look at what their personalities are and how we want to see them photographed. Then we start trying to figure out who we think is going to be the best match and make for the most successful shoot.

Pop Photo: What are the days on set shooting like?

Karen Frank: We get a lot of time for The Body Issue, typically when we’re doing a cover shoot for the magazine we are lucky if we get maybe an hour or two at the most. When we have a Body shoot we ask for a minimum of four hours, sometimes we get a full day and sometimes we get more than a day.

The athletes are all in and committed to it and want to make really outstanding images, and so do the photographers. I think there’s this bond that happens by the end of the day because everybody involved in this process feels like they’ve done something really special. I think there’s a kind of a closeness that you don’t always achieve on set. It’s a really unique experience.

Pop Photo: How does ESPN make sure that the sets stay secure and that images aren’t leaking before the big reveal in June?

Karen Frank: We let everybody know—both verbally and in writing— there is absolutely nothing that can go on social media. We try to keep our eyes open to make sure that people are complying with that, but you know, oftentimes the athletes or their representative or their friends might take a quick snap and then we always go up and remind them—hey don’t share this until the issue comes out. We keep a locked server for the images that we have here at ESPN, so only a handful of people can access them. And that’s true until they are sent out to the place where the issue is printed.

Pop Photo: What are some of the logistical challenges, in terms of body positioning, that photographers need to consider when shooting these very high profile —and very naked—athletes?

Karen Frank: It is a matter of fine tuning. We try to shoot most of them in active poses because we really want to showcase how they perform as athletes. Sometimes that will take a long time to achieve because you have to make those minor adjustments—I know that this is the way that you normally do it, but can you just lift your front leg a little bit higher so you’ll cover everything that we need to cover. Or can you raise your front arm and hold that. We also shoot tethered so that the athletes can actually come over to the screen and take a look and understand what it is that needs to be done.

Pop Photo: Are there any other things in terms of positioning that you are thinking about as you’re going into the shoots?

Karen Frank: We try to think about their body type and what their body’s story might be. With Karl-Anthony Towns [NBA, Minnesota Timberwolves], we played with that little moped to highlight how long his legs and torso are. With Saquon Barkley [NFL, New York Giants] we went into that shoot thinking we were going to shoot him doing drills, so you could really see him the action and how incredible his body is.

Pop Photo: Were there any shoots for the 10 year anniversary issue that were particularly memorable?

Karen Frank: Karl-Anthony Towns—he was the very last one actually and he was fun. He is a total character, kind of an overgrown kid, so we knew that we would be able to play with him. He was really up for just about everything and an incredible perfectionist. With most athletes, you keep the amount of time you ask them to do something to a minimum, because they get tired and there’s always a risk of injury. There were a bunch of shots that we were doing with him and we were like okay we got a few and he was like ‘no no no, I can keep going.’ I love that shot that we did of him on the moped.

Pop Photo: What was the Jerry Rice set like?

Karen Frank: Jerry [NFL Hall of Famer] actually drove to the set completely by himself, he got out of the car shook everybody’s hands was really happy to be there. We were at this really amazing location in Palo Alto—it was an artist residency and they have 600 acres overlooking the ocean and these rolling hills. We found this one area that we got them to mow for us, so it looked kind of like a football field, but it was a little bit rutted, there was some unevenness to the ground and we were concerned about him because we were going to be asking him to run on it. We walked him out there and said you know this is what we like to do, but please let us know, it’s a little rutted out here. He’s like ‘forget about that—I grew up in Mississippi I know what this is all about.’ He was just perfectly game for it and we had a lot of fun.

Pop Photo: How do you think the concept of The Body Issue has changed over the last decade?

Karen Frank: When it started out it was something that was brand new territory. No one really knew what it was going to be or how people were going to receive it. The mere act of getting an athlete to do it was a big deal. In the beginning I think there were a lot more images that were made in the studio with very statuesque kind of poses. We have tried to make it a much more active portfolio and also to really work with the personalities of the athletes. We try to bring some fun and lightheartedness and artistry to it. We try to travel to unexpected locations that will give us environment to play with.

Pop Photo: How has the process of approaching subjects changed over the years?

Karen Frank: I think people are much more open to it now because they know it. They see what we’ve done and they understand what we’re going for. There is nothing kinky or weird about it. It’s simply about celebrating the athletic form. The woman who actually makes most of the calls to the athletes says the day after the issue comes out is her biggest recruiting day of the year. All of a sudden she will get calls from people who want to do it the following year. People approach us. We approach people. We have a pretty high success rate now of getting the people that we want. There are still people who, for whatever reason, aren’t comfortable or don’t feel ready to do it yet. Hopefully we get them later down the line.

Pop Photo: The idea of what makes a body attractive has changed pretty drastically in the last decade. Do you think that the Body Issue has contributed to the body positivity movements?

Karen Frank: I do. I think we have made it a goal to include athletes of all shapes and sizes for that very reason—to show that they may not be what the rest of the world considers an ideal physical body, but their bodies are strong and powerful for perfect for the sport they play and have helped achieve incredible success. These are all elite athletes and their bodies are what have gotten them there.

See more from The Body Issue shoots, including BTS videos from the sets, over on ESPN.com.