Tsunami-like waves, parched earth, and floods are just a few of the dramatic entries. 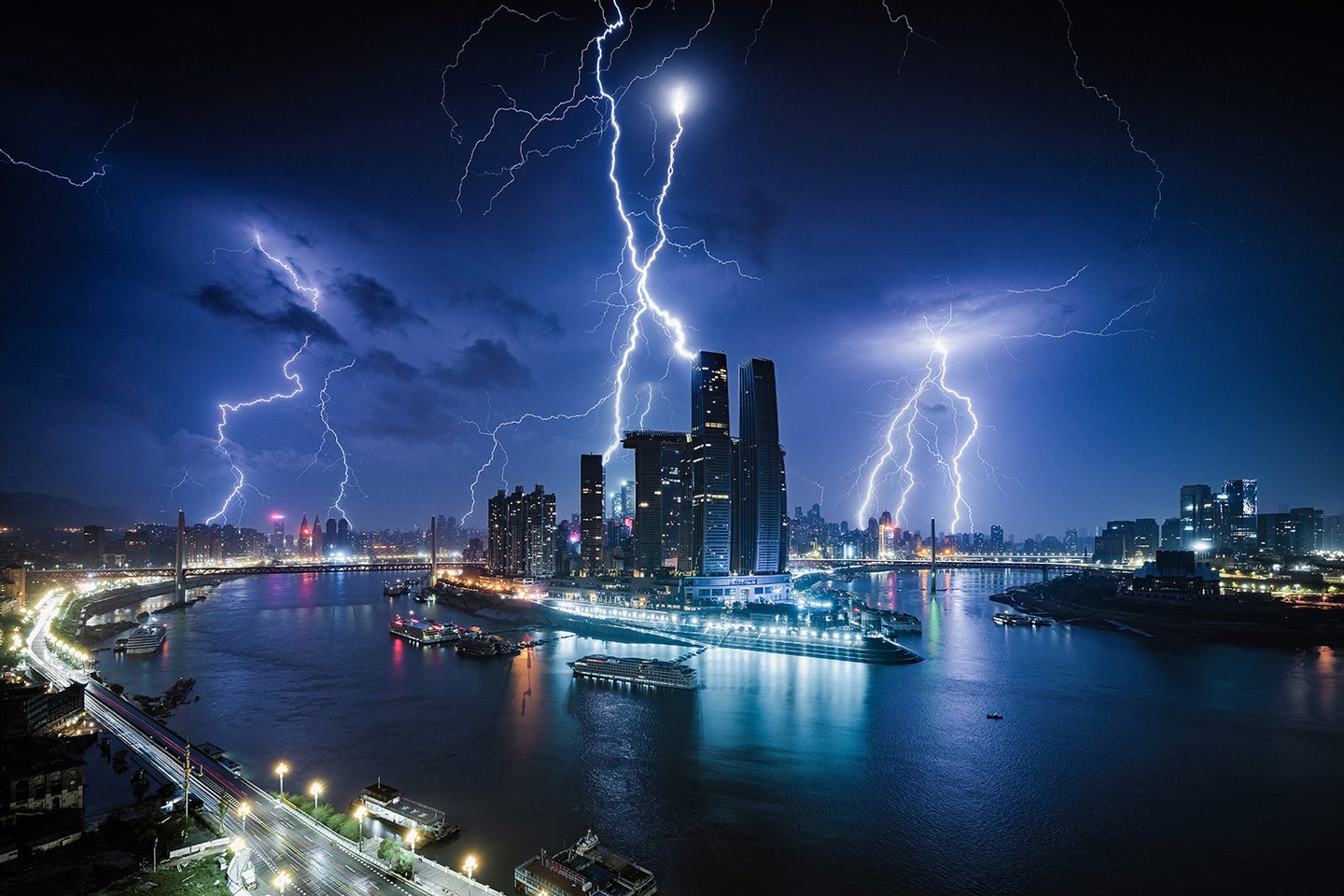 “Inside a cumulonimbus cloud, particles of rain, snow or ice move up and down, colliding and causing an imbalance in the electrical charge. Cloud-to-ground lightning, as seen in this image, happens when a channel of negative charge zigzags downward in a 'forked pattern'. This is usually invisible to the human eye and travels to the ground in a millisecond. As it nears the ground, it attracts a positive charge reaching up from a tall building, tree or telegraph pole. When the two connect, a powerful electrical current travels at about 60,000 miles per second back to the cloud as a very bright, visible flash of lightning”. Luo Xing
SHARE

The scenes feel like something straight out of 2012 or The Sorcerer’s Apprentice. Frost overtakes a window pane, bolts of lighting, extreme drought. The Royal Meteorological Society (RMetS) has selected the finalists for its Photographer of the Year Awards, and the voting is now open to the public. Winners are announced on September 21 and they, along with the finalists, will be featured in the annual calendar available later in the year. Here are some of our favorite contenders.

Jamie Russell was chasing storms across the Isle of Wright when he reached Bembridge and was rewarded with an exceptional rainbow, which he took drastic measures to photograph.

“In a panic I waded into the waist-deep water, fully dressed, just to compose this scene.”

This otherworldly scene, captured in Slovenia, is thanks to a temperature inversion that causes fog to form on the water’s surface. It happens just a couple of times a year, and Sara Jazbar was there to get the shot.

“The fog stopped under the bridge and lingered there, flowing, moving, as if alive,” Jazbar says.

In this image, we’re not quite at Loch Ness, but rather at Loch Lomond, in Southern Scotland.

“The woods, the alps, the loch, and Ben Lomond were bathed in ‘Scotch mist.’ This shot was taken just before the sun put in an appearance,” notes photographer Vince Campbell.

Monsoon season means it’s time to harvest waterlilies to sell at local markets. RMetS Weather Photographer of the Year finalist Shibasish Saha takes us to Barrackpore, West Bengal, India, with a drone to capture a unique perspective on the process.

“Wet Sleddale [reservoir] more often than not doesn’t overflow, but when it does, it’s an amazing site, and the noise is deafening,” notes Andrew McCaren. The overflow was a result of heavy rain and though the subject is cheerfully decked out in rainbow umbrella and electric green rain slicker, we’d guess this is not what Gene Kelly had in mind for a little singing in the rain.

In search of water

The cracked earth only highlights the feeling of desperation in the search for water, two pots dismally empty. Barun Rajgaria shares that during a “drought, the women and children of the village [in Purulia, West Bengal] have to make deep pits in the dry river, in which the frozen water quenches the thirst of the people here.”

In stark contrast to the previous entry, Betel Tibebu’s image is an abundance of water. Addis Ababa, Ethiopia, experienced flooding after intense rain. Bubbles form when a raindrop hits the surface, trapping the air.