Shot by ecologists and evolutionary biologists, the winning images highlight nature’s beauty—and the importance of protecting it. 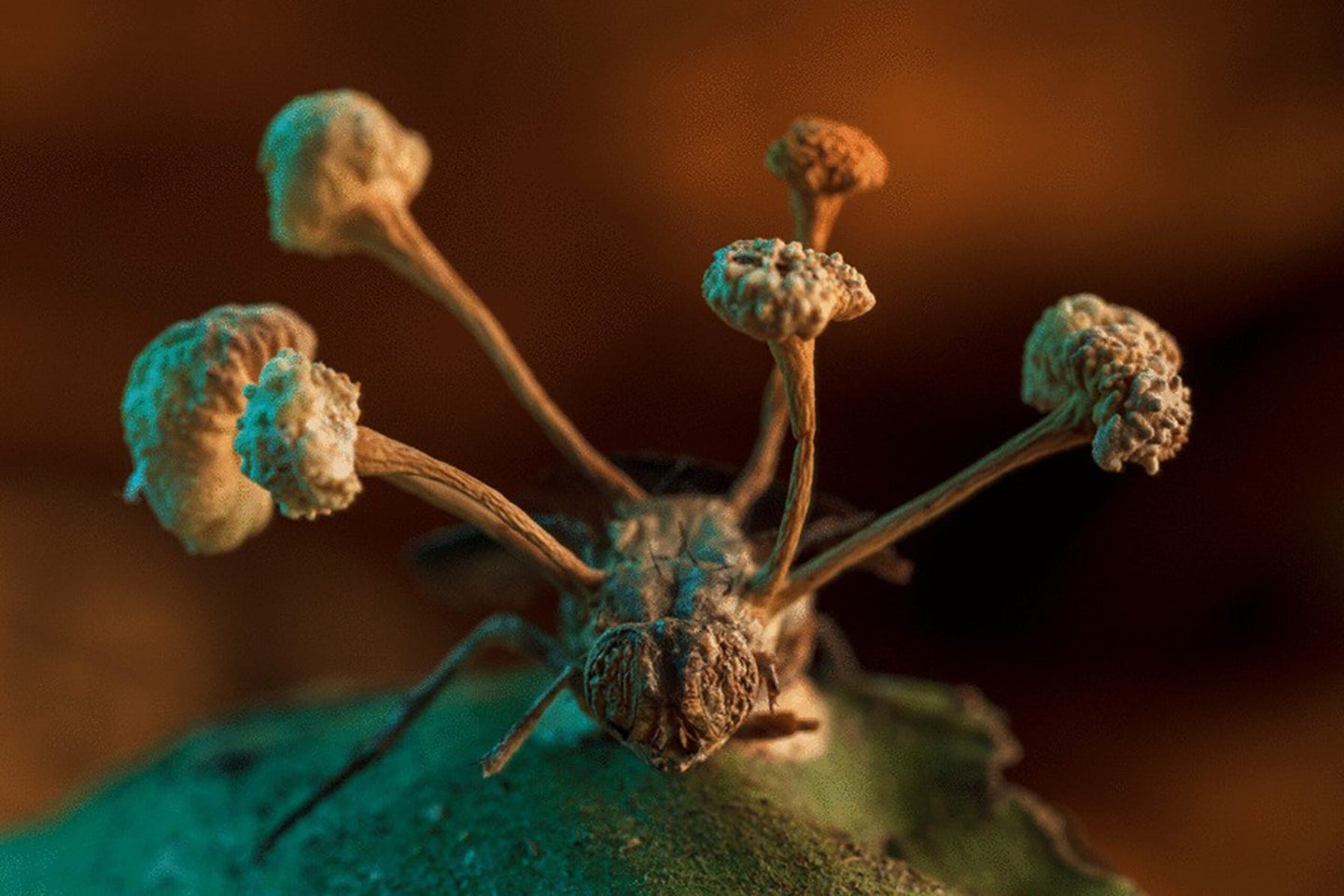 Overall winner. "The story of a conquest. The fruiting body of a parasitic fungus erupts from the body of its victim". Roberto García-Roa
SHARE

The zombie apocalypse is coming. That is, if you happen to be an arthropod. The fungus Ophiocordyceps is known to infiltrate critters’ exoskeletons and minds, allowing them to be controlled. And an image of that post-apocalyptic, horror movie scenario is the winner of this year’s BMC Ecology and Evolution photo competition.

Related: Into the wild: a selection of the year’s best nature photos

About the BMC Ecology and Evolution photo competition

The BMC Ecology and Evolution photo competition is an annual contest hosted by BioMed Central, an open-access, peer-reviewed journal. It is open to ecologists and evolutionary biologists worldwide. The competition aims to “capture the wonder of the natural world and the growing need to protect it as the human impact on the planet intensifies.”

Participants can submit to four categories: Relationships in nature; Biodiversity under threat; Life close up; and Research in action. The judging panel consists of BMC’s Senior Editorial Board, which selects an overall winner plus the best image and runner-up in each category. The jury takes into account both artistic judgment and the story behind the science.

Evolutionary biologist and conservation photographer Roberto García-Roa was crowned the BMC Ecology and Evolution photo competition overall winner for his image of parasitic “zombie” fungus overtaking an arthropod in the Peruvian jungle. According to board member Christy Anna Hipsley, García-Roa’s entry “has a depth and composition that conveys life and death simultaneously—an affair that transcends time, space, and even species. The death of the fly gives life to the fungus.”

“Inadvertent alcoholism” were two words winner Alwin Hardenbol used when talking about this image of a Bohemian Waxwing perched on a rowan tree. Waxwings are known to migrate until they can locate their favorite berry, eating up to 700 per day, which can cause issues.

“As the berries become overripe, they start to ferment and produce ethanol which gets Waxwings intoxicated, sometimes leading to trouble for the birds, even death,” Hardenbol, a Postdoctoral Researcher, notes.

Behavioral biologist Alexander T. Baugh was the runner-up with an image of a fringe-lipped bat feasting on a male tungara frog. According to Baugh, bats will locate frogs by listening to the mating calls; bats’ ears are specifically attuned to the frogs’ low frequency and their saliva is able to neutralize potential toxins.

Winner Smantha Kreling of the University of Washington paints a painful portrait of how climate change affects wildlife—in this instance, the relationship between elephants and the baobab tree.

“This ancient tree has adapted to its extreme environment by storing water in its barrel-like trunk when water availability is low. Sadly, recent research shows that these trees are victims of climate change. Elephants have long gouged water from the trunks of these fast-healing trees, but as temperatures rise, the elephants are now doing more damage than the trees can cope with. “ Kreling writes.

Lindsey Swierk, Assistant Research Professor at Binghamton University, captures a Wood frog trapped under ice. Due to climate change, frogs are laying their eggs earlier in the year, only to be caught by a late frost. In this case, the frog survived, but many eggs perished.

Boston University PhD candidate Brandon André Güell submitted this image of gliding treefrog eggs. Many will never survive due to a variety of factors, but those that do, hatch in six days. As Güell noted, the eggs are more adaptive than they appear.

“Hatching in gliding treefrogs is an excellent example of adaptive plasticity and environmentally cued hatching; embryos can hatch prematurely to escape predators, flooding, desiccation, and other egg threats”

To escape predators, the anole lizard will often run to water. Swierk photographed one such lizard breathing through a small air bubble, which can sustain it for up to 20 minutes—perfect for making a getaway.

Like Swierk, Güell also had a second entry in the running. Here, Güell is photographed surrounded by thousands of gliding tree frogs.

“This photo captures a treasured memory of the first explosive breeding event I observed, photographed, and collected data from for my dissertation research. In this picture, I am standing waist-deep in a lowland tropical rainforest pond on Costa Rica’s Osa Peninsula, holding an adult male gliding treefrog from which I’ll later take measurements.”