Photojournalist Susan Meiselas: How to be in the right place at the right time

The legendary documentary photographer talks about building relationships, following gut instincts, and the intersection of photojournalism and art. 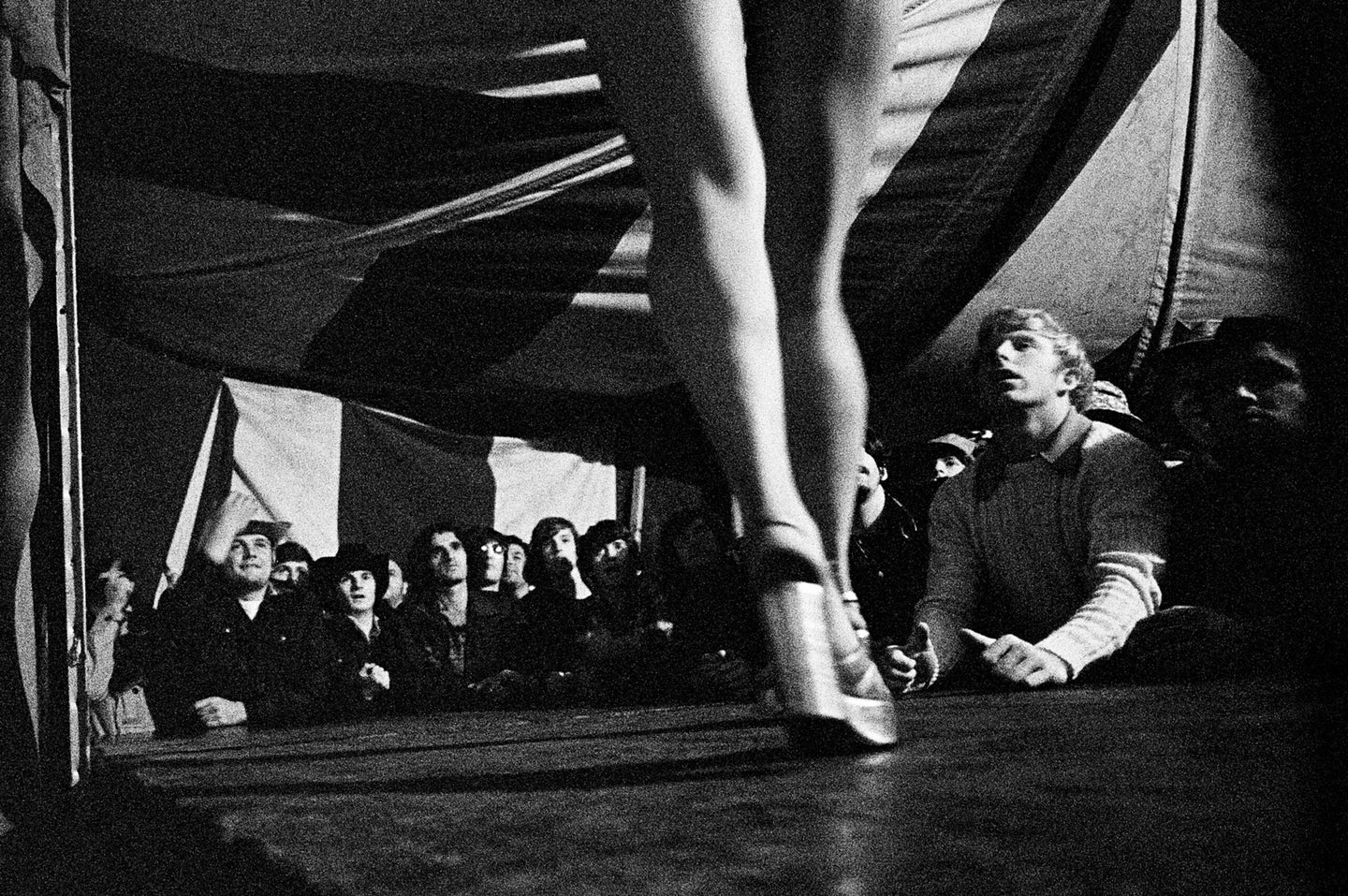 In June, Susan Meiselas received the PHotoEspaña 2022 Award for her career as a documentary photographer covering cultural hotspots including Nicaragua and Kurdistan. As part of the Per Amor l’Art Collection, her series Carnival Strippers commands its own room at Círculo de Bellas Artes in Madrid within PHotoESPAÑA’s Sculpting Reality exhibition. Here we talk with Meiselas about documentary photography, art, and being in the right place at the right time.

PHotoEspaña 2022 explored the interplay between documentary photography and art. How have you dealt with that division in your work?

It’s interesting to look at the history. Carnival Strippers was first produced and first seen in a gallery in New York City—and then in an experimental cultural space called CEPA in Buffalo, New York—as a series of framed pictures on a wall. In Buffalo, I incorporated the original audio that I had captured during the time I made the photographs for those three summers. There was a melange of sound, from the voices of the women to the men in the audience to the balkers, that was heard in the gallery spaces. That was in 1975; the book came out in ’76. It was excerpted for a couple of European magazines. So it’s had a life—call it fine art or documentary—across that territory its entire time as a body of work.

Some of the distinctions get confusing. There’s no question that I was making the work in a documentary tradition, capturing what I saw. I shared the contact sheets with the participants, so they saw them over time. The work wasn’t made as art. It was made to document something that was quite prevalent at that time and is now no longer. Obviously, the sex industry has gone on in multiple other directions. But this was an early expression.

When you set out to do it, what interested you in this world and what were you trying to show?

I did not set out to do it. I was traveling with my partner looking at state fairs, mostly in the Midwest. And when I came back and crossed the path of what were known as “the girl shows,” I was mesmerized by them—I had no idea they existed. I spent the next three years trying to do the best I could to travel with them, to meet the women and the managers, and have access to their working lives. [I wanted to know] how they felt about it and how they felt about themselves and how others perceived them at the time.

It’s amazing to experience the photos juxtaposed with audio. At the time, did you go for that double effect: recordings and images together?

Well, why was I doing it? Your guess is as good as mine. It was my natural instinct that what they were saying was as important as what I was seeing. Right from the beginning, I collected probably 200 hours of tape. And then I hand-transcribed, because there was no technology, and excerpted the transcripts from the tapes into the text that’s part of the original book. So obviously, my intention was to contextualize the photographs from the beginning with their words.

How did you get into that world so intimately? Did you befriend people first?

You build these relationships over time. The first summer I saw the girls show like anyone else would, on the fairgrounds, and I began to photograph. And then I came back the second summer and introduced myself, showed them work, etc., progressively. The girls themselves were changing very frequently. With the managers, it was key that they understood and invited me in because the women wanted me in the dressing rooms. These things are processes. If you have full clarity about what you’re doing and why you’re doing it, that’s what leads to good work.

When you photographed in Nicaragua [in 1978-79], during the rise of the Sandinista movement, did you also try to develop relationships over time?

In the case of Nicaragua, it’s an insurrectional environment. Nobody tells you where they’re going to be, or what’s going to happen. You follow events in a very different spirit. You don’t have the same kind of relationship by any means. It’s a totally different set of conditions. But I could see that history was unfolding, so every day or every week throughout that year I was just moving through the country trying to grasp what was developing.

This was at a time when we didn’t have the global news spreading around like now. How did you zone in on that story?

I saw an article on January 10th about the assassination of Pedro Joaquín Chamorro, who was head of the opposition newspaper [La Prensa]. It was assumed he was assassinated by President Somoza. That was a large piece in the New York Times—I was totally struck by it. But there were no images of what was happening that I could find at that time. Then I began to read about it. It took me five months to mobilize and go, but I was learning about it through the news. Not through the internet—where you see so much you’re probably not even compelled to go somewhere now. The fact that I didn’t see very many images is probably part of what motivated me to go. To find out about what was happening.

You found yourself witnessing this huge revolution. And then the same thing happened again in Kurdistan.

Well, that’s a different story, because, in Kurdistan, I went there after this exodus of refugees leaving northern Iraq to both Turkey and Iran. I went through Iran into northern Iraq to see what had happened, and then it led me on a very different process, to dig out the visual history of the Kurds for over a century. So it’s not as obvious as following the news. But nonetheless, [I was] connecting different people, history, and places over time.

Many years ago, I exhibited at PHotoEspaña my Kurdistan pictures. I loved working with the festival, and I came back later to install Carnival Strippers with another series in the sex industry called Pandora’s Box, which was about an S&M club in New York. I wanted to juxtapose those two bodies of work. What I love about PHotoEspaña is that it incorporates such a wide range of work in very different kinds of settings. So of course I was honored to be honored by them.

You’ve been quoted: “The camera gives you an excuse to be somewhere you don’t belong.” In a scene that might be fraught with tension, does a camera give you more access? Does it scare people?

It could do both. Sometimes it gives you more access; sometimes you can’t photograph at all. You have to figure out how important it is to make those photographs and figure out a way to do so. But I don’t mean surreptitiously. For me, it’s important that people know that I’m making photographs, and understand the nature of the relationship that I try to build in that process.