David Ulrich: How to be a more mindful photographer

'Any creative art, not just photography, if it's approached deeply, can bring you into greater contact with yourself.' 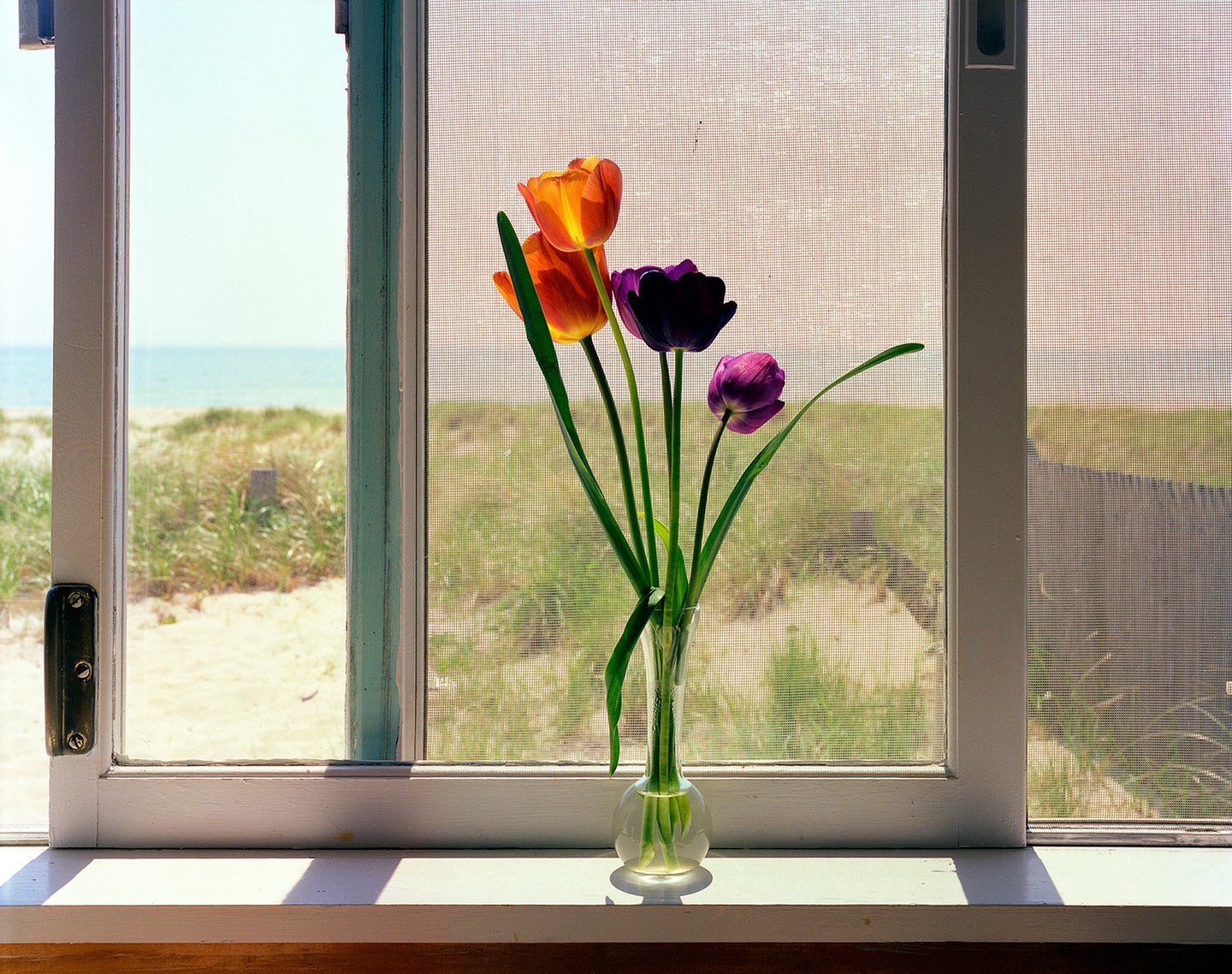 David Ulrich is a photographer, writer, and teacher. He worked as an assistant to Minor White, drank with Ansel Adams, and crossed paths with many of the great photographers of the late 20th century. His life was changed when he witnessed the Kent State shootings in 1970, which led him to change his path from photojournalism to fine art photography. His latest book, influenced by his Zen practice, is The Mindful Photographer.

One of the defining moments of your life was when you witnessed the shootings at Kent State in 1970. How did this affect you?

I was a 20-year-old photojournalism student in 1970. There were campus-wide protests against the Vietnam War. At first, it was a rather festive protest. People brought their children, there were peace signs, and so on. On the evening of May 2, somebody burned down the ROTC building, and activists from around the country started coming to Kent State. On May 3, the governor called the National Guard, things started getting a bit violent. They were using gun butts on unarmed students.

By May 4, the protest was quite large, and a lot of national guardsmen descended on the campus. What we didn’t know at the time was that they had live rounds in their rifles. The students were getting a little rowdy. The National Guard tried to quell the protests by throwing tear gas into the crowd, and the crowd picked the tear gas up and threw it back. At no point were the guardsman closer than half a football field away from the students. And at some point, somebody gave the order to fire.

They shot indiscriminately into the crowd. Thankfully, many of the guardsmen couldn’t do it. They aimed above or below the students. But some aimed at the students. Four students were killed, and a number were injured. It was a wake-up moment for me; I had never been in contact with death and violence before.

I left photojournalism. I realized that to be a photojournalist, you had to make your primary commitment to the social order. I believed that the only element that could change things for the better was an expansion of consciousness in the individual, and by extension, society. And that art and creativity, I believed, had the capability to engender a consciousness. So I dropped out of college and took a menial job delivering flowers. I then met and began to work with the photographer Minor White.

‌Minor White is not a name one hears a lot these days, but he was hugely important in photography at the time.

He was the co-founder and editor of Aperture for more than 20 years. His mission, in the broadest possible sense, was to teach people how to see. He was a Zen practitioner, and he brought a lot of Zen exercises into the classroom. We would meditate on a regular basis. He viewed photography and art exactly as what I said before, as a means of expanding one’s conscious awareness. It was a very powerful six years. It was life-changing. It put me on the path of a seeker. And it’s colored my attitude toward photography to this day.

In the intro to The Mindful Photographer, you say, “For me, photography is many things: a means of interacting more deeply with the world, a path of personal growth and transformation, a challenge to strive toward becoming more whole and attentive, a catalyst for stimulating creative expression, and a vehicle for insight and understanding.” That’s a lot.

It is a lot. But it is all those things. Any creative art, not just photography, if it’s approached deeply, can bring you into greater contact with yourself. It assists in the aim of self-knowledge. But photography, especially, is a pathway into the world. I love the alternating nature of photography. On the one hand, I’m looking within; the standard definition of mindfulness is that I am aware of myself, I’m aware of my bodily posture, my breathing, my heartbeat, my emotions, I see my thoughts pass.

But many people stop there. Mindfulness is also about being attentive to what’s in front of you and your surroundings. So it’s a dual attention. Some of my attention goes back to me, half of my attention goes out to the world, and there’s a relationship there. And that’s the power of photography, the relationship between our internal dynamics, and everything in the outer world.

You say that “Photographers often spend a disproportionate amount of energy thinking about and even obsessing over tools and equipment.” At the same time, you stress how important it is to really know how your camera works.

I have nothing against gear. In fact, I love gear. And I think that our lust for gear can actually help us as photographers. But I don’t think it should stop there. I think that’s a phase we need to move beyond. Because photography is, above all, a medium that communicates. The viewer really doesn’t care what kind of lens we use.

What sort of gear do you use?

For much of my career, I used a 5×7 Deardorff view camera. Nowadays, I’m mostly digital.

‌There’s a really big difference in the slow photography of working with a view camera. How much did you have to change the way you think when you went from that camera to digital?

One thing I really wanted when I was working with a view camera was the ability to snap my eyes and take a picture that I could keep. And now we have that with cellphones. So, to a certain degree, I found it freeing to go to a handheld camera. Let’s not forget that view cameras are for young people. They’re incredibly heavy. I would hike long distances in the field, carrying 40 or 50 pounds of equipment.

‌If you look at Joel Meyerowitz, whose first work was handheld, when he went to Cape Cod with a view camera, everything slowed down, his way of looking, his way of photographing. We can see this in his book Cape Light.

It did, completely. I value both. I value the reflexive, handheld process, where you can bring a camera up to your eye in a moment’s reaction to the scene. And I also value the contemplative, patient process with a view camera. I feel they both have their place.

‌We live in a world where everyone has relatively powerful cameras in their pockets. As a teacher, what sort of preconceptions do your students have about photography?

I’m sorry to use this phrase in this way, so I’m going to apologize in advance. But the first challenge that I have as a teacher is to break down what I call the “popular photography aesthetic,” and to move them away from cliches to something more authentic. The biggest problem I have with today’s beginning photographers is they’ve seen so many pictures.

‌You point out the importance of looking at photobooks to learn about photography. One of the difficulties is that they’re often expensive to acquire. So what do you recommend to students?

The way I looked at other photographers’ work when I was growing up was by looking at prints, going to galleries, and going to museums. Every city, more or less, has museums that show photography these days.

When I was young, you could call up the Museum of Modern Art [in New York City], and you could say, “Can I come in and look at this collection?” At the time when I was working with Minor White, I wanted to look at the Edward Weston master set. So I called up MoMA and made an appointment, And I sat down with white gloves and boxes of 800 Weston prints that I could handle on my own.

As I was in the room, John Szarkowski came in. He was the director of photography, and he was meeting with Doon Arbus, Diane Arbus’s daughter. They were making decisions about which pictures would be in the Diane Arbus monograph. They looked through all the proof prints. When could that happen today? That a young nobody could go into a major museum and look at work like that, much less have the director and Diane Arbus’s daughter coming into a book editing session right next to you.

When I was growing up, it was a small, intimate community. I got to know Minor White, of course; I got to know Robert Frank. Ansel Adams, Judy Dater, Imogen Cunningham, the list goes on and on. Because everybody knew everyone. And they would say, “Oh, you work with Minor White. Come look me up when you’re in California.” Ansel Adams invited me to cocktails at his house overlooking the Pacific. And he could drink me under the table.

‌That was a privileged period. Because you were revolving around one of the key photographers in the United States at the time, that opened all sorts of doors for you.

Yes, it did. But even without Minor, when I was in undergrad and grad school, many of these photographers came to talk to our classes. It was an intimate community. And that’s where the privilege was, in that intimacy.

Another quote from your book that I like is “A photograph lives in the space between it and a viewer where a response takes place.”

Absolutely. The intent of a photographer is important. But in the end, the meaning of the picture is what the viewer takes away. I would argue that not all art is subjective. You can take a picture apart, you can talk about the frame, the light, the moment, color, etc. And you can talk about the use of these things, whether they’re effective or not.

‌Zen teaches that the real world is an illusion and that we create the world with our consciousness. A photograph, in some ways, freezes what our minds have created, and I find that an interesting paradox.

I think there are different levels of our experience. We live in a dual world, a world of phenomena, a world of heat and cold, of light and dark. And that world exists on one level. We all have moments where we may experience the unity of life, we experience a profound silence, or profound emptiness that you could say is non-dual. So we’ve penetrated to a deeper layer. In that layer, you could say that phenomena are an illusion. We live in both worlds. I think at the deeper layers of experience, we recognize the emptiness, the silence, the ground of being. But we also live in the world of material reality. And we have to balance those things; we have to have one foot in both worlds.