Cig Harvey's latest book, 'Blue Violet' began as a series of photographs intended to lift the spirits of an ailing friend. 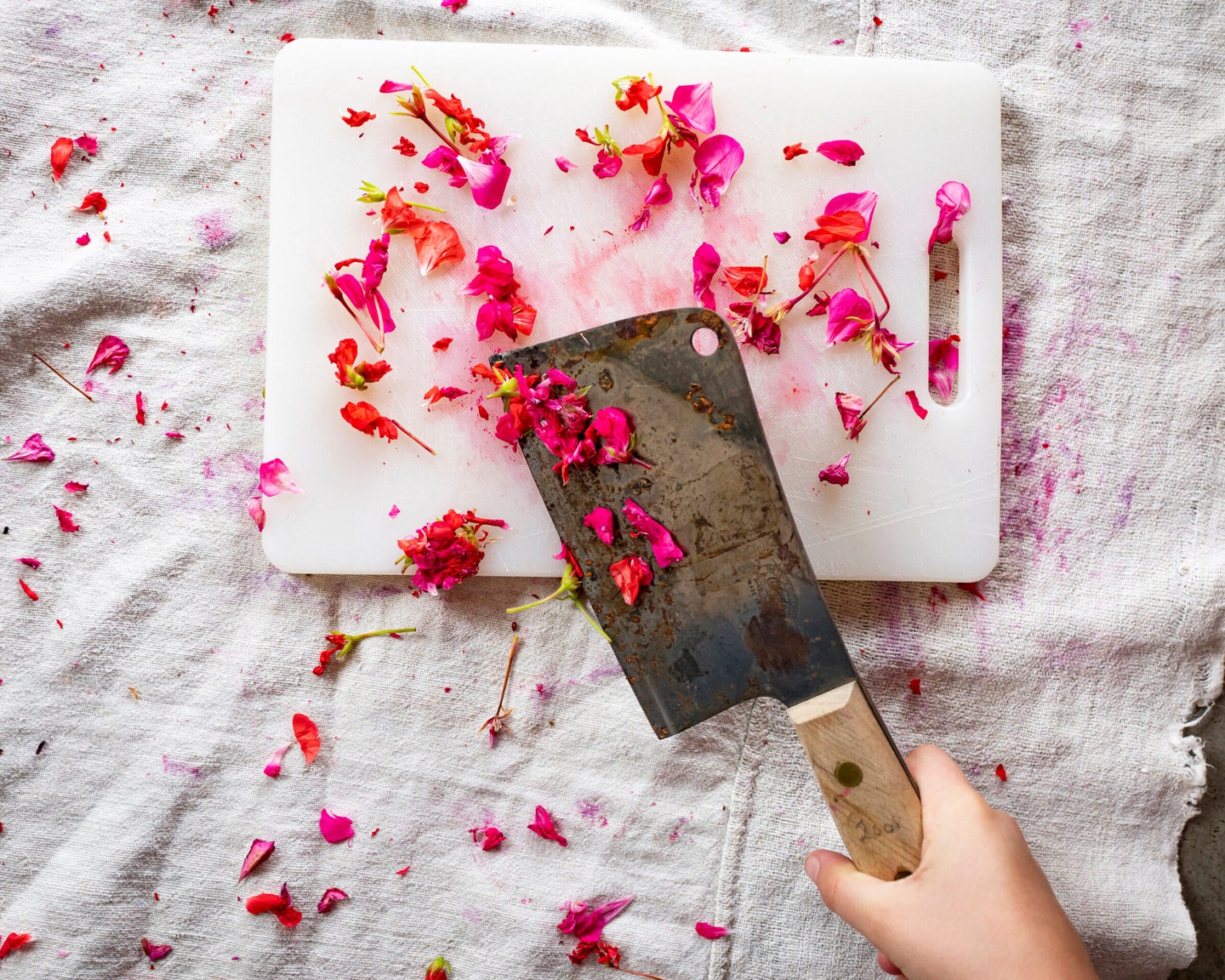 Cig Harvey lives in a farmhouse in rural Maine, where she photographs the people and places around her. Harvey’s photos often feature bright, saturated colors, and a touch of surrealism, as she tries to find the magic in the mundane. Her latest book is Blue Violet, an exploration of grief through flowers and colors.

Your latest book, Blue Violet, features bright, saturated photos of colors, but it’s really a book about grief. How did this project start?

A friend was diagnosed with a rare form of leukemia at 36, and she went into an isolation unit, where everything is super sterile, for six weeks. It was summertime in Maine, and she was in Boston, and she said, “send me pictures.” So I sent her a picture; it was this wild, voracious bush that was blooming. And she said, “send me more.” I wasn’t going to send her B&W work; I wasn’t going to send her something that wouldn’t bring her joy. So it became this habit of sending pictures every day, and then it grew into its own thing, where it was this idea of celebrating the senses. I worked with flowers because they affect all the senses. Originally, the book was laid out by sense: obviously, sight, but also touch, the way things feel, like lamb’s ears; and then taste, the idea of cooking with flowers and eating flowers. I thought I would have nothing to write about for sound and flowers, but there was so much there that it was actually one of the most interesting chapters.

I wanted to send things to her that were bursting full of life, but then I realized it was not just about her and I and our relationship, it was about trying to live more, trying to appreciate every day more, and spreading that joy to others.

There are 72 photos in Blue Violet. How long did it take to sequence the book? Did you make big prints and small prints; did you lay them out in a big space…?

I have a room at an old school about 10 miles from here, and I keep it really minimal. I make prints continually; prints small enough that I can move things around. Then I sequence the text; I also print out all the texts, so it’s very hands-on analog. I print the text on white Xerox paper, and the prints are 5×7 or 8×10, and then I try to make the jigsaw puzzle of the sequence. It’s a really slow, grueling process.

I often think there can be many sequences, but it also seems like there should just be one. And because the text and image aren’t made at the same time, but I want them woven together, that can be a real headache. But I love all that; I love that conundrum. And I would always sequence my own books rather than have a publisher do it.

We’re still in the midst of COVID-19, and there’s the war in Ukraine going on now. How does art respond to that?

More and more, as I get older, I feel like this is the central theme of why I make work: the idea that we can unite on certain things. Our politics might be wildly different, but we can unite on nature and what is considered beautiful. Years ago, I was on a beach in Florida, on Sanibel Island, and every night around sunset, people gather on the beach, and they clap the sundown. They count it down, ten, nine, eight… It’s just nature doing its thing, but the light and the colors are glorious.

I do feel that art can somehow help create repair. Last year, all through COVID-19 I did projections at night in my town. I was supposed to do it for four days; it was right around election time, and COVID was soaring, and the clocks went back. So I started doing these projections on a 50-foot by 30-foot wall downtown; hot pink flowers and all the work from Blue Violet. It was the emotional highlight of my career because people were driving home—not people who would typically go to an art gallery—and just stop and pull over. It became this event that people would go to at night. I did it for four months, every night. I watched people, and I saw that it somehow helped.

You grew up in a rural area of Devon, England surrounded by nature. How did that upbringing influence you and your interests as an artist?

Related: Todd Hido’s lonely side of suburbia, and 5 other new photobooks worth checking out

I believe that photographers don’t get to pick our projects or what we’re obsessed with photographically, it’s just in us. I don’t know if that’s why, but I know that the natural world is absolutely an integral part of my work. I lived in a city for 10 years, and one picture made it into one of my books. I love the city for many reasons, but I don’t make work there at all. And I’ve tried and tried, but it’s just not what’s in me. I think that Devon, in many ways looks like Maine; it’s a similar landscape. I think of the blueberry barrens here as being related to the moors; that sort of wild landscape that’s so full of metaphor and symbolism.

I found an article with photos of your house, which is beautiful. It looks like a lot of the photos in Blue Violet were taken in your garden around your home.

If they’re not made within a mile of my house they’re very close. There are a few pictures that I’ve made when I travel, but I try to make them look like they could have been made anywhere rather than specific to that location. So there are no palm trees in my last 20 years’ worth of work. I truly believe that if we can live with eyes wide open and in a state of being aware at home, in the same way we do when we travel, when all our senses are firing because things are new; if we can try to live that way, that’s an extraordinary way to live a life. And photography helps me do that. It makes me more aware and more present and more appreciative of the light on a picnic table.

Right now we’ve just hit spring here in Maine, but the forsythia and the magnolias are just about to pop. They’re not exotic flowers, but I think they’re extraordinary. So I do try and make everything at home.

‌Flowers are a popular subject for photographers starting out. But there are some extraordinary photographers who shot flowers, like Imogen Cunningham and Robert Mapplethorpe. Are flower photos considered less serious?

I do think it’s interesting, there is this hierarchy of what can be photographed. That’s snobbism. I definitely think the flowers have fallen into the realm of what is feminine and sometimes, we know that what is feminine is somehow denigrated and not considered as important. I like to turn all that stuff on its head. For me, it’s all about the metaphor and symbolism. If you look at art history, you know that how artists have used the symbolism of flowers throughout the ages is fascinating and glorious, and the secret history, the secret language of flowers, goes back to Victorian times.

As I mentioned before, this book is all flowers, but it’s not about flowers. It’s about being and dying. My best friend was dying, and this is what I sent to her. That’s about as serious as it gets.

The third printing of ‘Blue Violet‘ is out now.