The Polaroid camera is back with Bluetooth, LED flash and a rechargeable battery 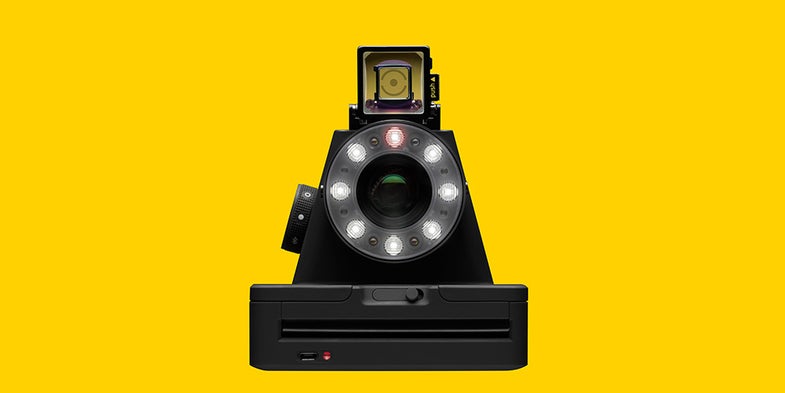 The past year has been a pretty hectic time for fans of instant photography, with instant film checking in as one of the best-selling holiday gifts of the year, then getting hit with the unfortunate death of the beloved Fujifilm FP-100c instant film. The Impossible Project, however, is now trying to swing things back in the positive direction by releasing a totally new camera built for the classic Polaroid camera image format. It’s called the I-1 Instant Camera and it’s rather intriguing.

The I-1 was announced at the Bloomberg Businessweek design conference and will officially go on sale May 10th for $299. While it uses the same Polaroid camera pack film, there’s a lot about the I-1 that sets it apart from its retro counterparts.

The camera itself has a vaguely pyramid-shaped form factor with the film staying at the bottom and the body tapering up to a pop-up reticle system that’s used to compose shots. There’s very little visual clutter on the camera in terms of buttons and switches, due in large part to some of the new functional upgrades. The I-1 has built-in Bluetooth that allows it to connect to a companion smartphone apps which can change settings like aperture and shutter speed. It can also remotely fire the shutter on the camera. The battery is also now rechargeable, which the company says is more environmentally responsible.

The flash has been revamped too, and I can see that being a somewhat controversial piece of the camera. Rather than a traditional flash, it now has a ring of LED lights that surround the lens. I have a strong association with traditional heavy flash and the classic Polaroid camera “look,” but I’m interested to see how this performs before making up my mind about it.

The elephant in the room when it comes to instant photography, of course, goes by the name of Instax. Fujfilm currently offers Instax Wide instant film cameras between $66 and $100. And, while the Instax images aren’t as big and don’t have the same classic, square Polaroid camera form factor, the film costs less than $1 per frame, while the Impossible Project film hovers around $3 for each picture.

I personally believe there’s a market for each camera and format, but it will be interesting to see how the Impossible devotees react to a slew of new features and a modernized design. We’ll bring you some hands-on impressions and sample images as soon as we can get our hands on an I-1.