Award-winning sports photographer Simon Bruty talks about what it was like to shoot during covid and the upcoming Olympic games. 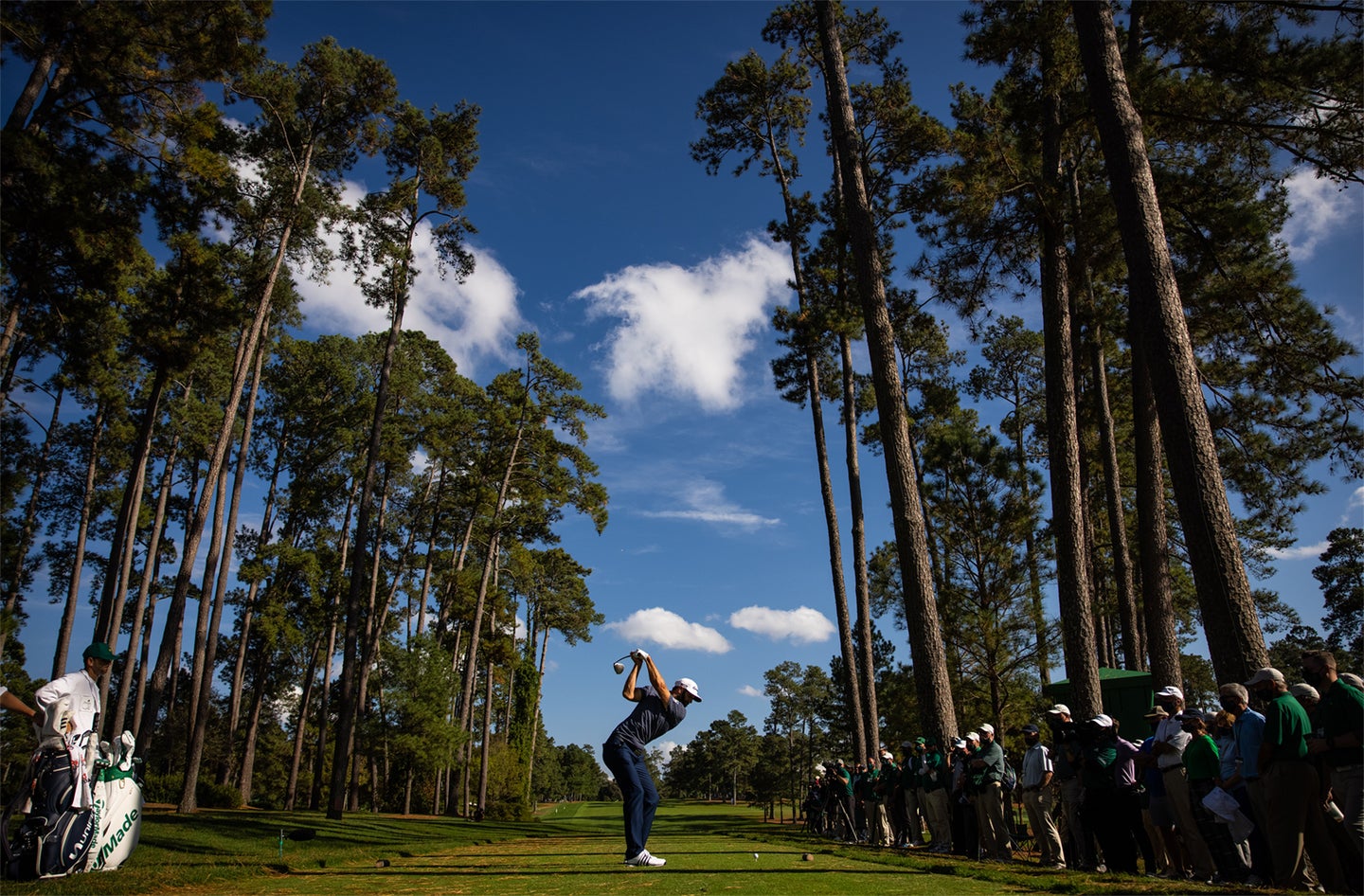 Shot during the final round of the 2020 Masters golf tournament. Simon Bruty
SHARE

Professional sports photographer Simon Bruty is getting ready to go to Tokyo for the 2021 Olympics. He’s working as part of a three person team covering the games for Sports Illustrated. It won’t be his first Olympic assignment, but this one is—perhaps predictably—a lot different than his trip to Rio back in 2016 before the COVID-19 pandemic upended the entire world.

Bruty’s resume is the kind of thing that makes an aspiring sports photographer’s mouth water. He has also covered World Cup soccer matches, Super Bowls, tennis majors, and he’s part of Canon’s Explorers of Light program. But, even with that much experience under his belt, shooting during COVID and through the recovery has presented unprecedented challenges.

I talked to the Washington, D.C.-based photographer about how sports photography has changed since early 2020, his preparation for the 2021 games in Tokyo, and how to make professional golfers mad at you from a long distance.

Before COVID-19, you were traveling pretty much constantly to shoot pro sports. What happened when the world started going into lockdown?

At the beginning of 2020, I was in Switzerland shooting the Youth Olympics. I was looking at the television, and I could see the news. You didn’t have to be Einstein to realize it was coming to all of us. I kept thinking ‘what would I do if I didn’t have any work?’

Then everything came to a dead stop. Sports were gone. I quickly figured out that I needed to find some way to not go completely stir crazy. I needed a reason to get out of bed. After a while, I just decided I needed a schedule. I had to tackle the things I was putting off forever, like editing, organizing my catalog, and working on books. I can stay home for about two weeks before I start getting twitchy.

When did things finally start picking up again?

I traveled for a couple of one-off portrait gigs around D.C., but it was all within driving distances. Baseball started to slowly come back. My first real gigs getting back to work were the US Open tournaments for tennis and golf.

I went to the US Open golf tournament at Winged Foot and then I went straight to the tennis. That was three weeks all in one shot. I hadn’t traveled before then.

Was it weird shooting those tournaments with little to no crowds?

You use the crowd when you’re shooting golf to mask the noise of the camera or your movements. I shot the practice days and it was very relaxed. On Thursday, however, it got serious in a hurry.

I lined up a nice shot of Jason Day from about 400 meters away. In the distance, I hear these guys on another tee box shouting. I realized they were shouting at me because they could hear the noise of the DSLR camera. They wouldn’t have heard that under normal circumstances. I suddenly realized ‘holy shit, I can’t use the shutter.’ So I switched to live view. It immediately changed the way I was shooting right there and then.

When you’re the only person standing somewhere in a golfer’s line with a 400 f/2.8 lens, you stand out like a sore thumb. I wasn’t wearing camouflage. You have to understand that you no longer blend into a crowd. I wasn’t anonymous.

No crowd at the tennis. The noise factor wasn’t as important, but movement, sometimes you sneak around. The tennis players are pretty used to it, but you do stand out very obviously.

Have the COVID protocols started to change in the US now that vaccinations are up?

Yeah, the protocols for getting into events have started to change. At this year’s US Open golf, they took my temperature on the way in, but I wasn’t tested. There were big signs out on the course saying that if you were vaccinated, you don’t have to wear a mask.

Are venues and organizations cutting the number of photographers allowed to shoot events?

To run back to 2020, the organizations that were running these events were seriously limiting the number of photographers coming in. They had to deal with state rules and there were all kinds of hurdles that the organizers had to jump through to make the events happen.

The US Open of Tennis happens in NYC and there are usually a ton of photographers there. I think they let one photographer in per agency last year. There were probably maybe 15 photographers in that event. It was a huge reduction.

The US Open golf had a lot more photographers this year, but there are still some controls. Outdoor events are probably easier to keep the numbers as they were. Particularly at a golf event, there’s a lot of room for photographers to spread out.

With those tournaments over, you’re turning your attention toward the Olympics. Does this trip to the games feel a lot different than your previous trip?

That’s an understatement right there [laughs]. The organizers issue a playbook for the media, and they’re constantly revising it. Lucky enough, I have Sports Illustrated to weed through some of it. If I was a freelancer going on my own, I’d be kind of lost right now. They’re changing the rules as we talk.

Can you outline some of the specific challenges you’re already facing?

There’s a question of quarantine. The people who went early had to do 14 days in their hotel room. I knew some people who have done it. I’m going in quite late. I get into Tokyo on the 21st and they’re talking about three days and being able to work.

Do you have a plan of attack once the games start and you get shooting?

What they’re saying right now is that photographers have to put down a 14-day schedule. It’s difficult enough knowing what the story is going to be three days out let alone 14. Then you have to apply 24 hours in advance to each event online.

Do you typically have freedom to move around different events?

Generally, you could get into whatever you wanted to cover with the exception of some of the bigger events—like finals—which were ticketed. The scheduling is definitely going to change how many events you can get to. Say your event doesn’t work out and you want to go somewhere else, I don’t think you’ll be able to go.

Even once we’re in the venue, we don’t know where we’ll be. Will they assign us seats? Can I go where I want to go to?  We don’t know yet.

Will it be hard for you if you’re constrained to a seat or a small area?

If I have to sit in a seat, that’s going to be difficult for me. I don’t want to do that. I don’t want to be where the other photographers are—I want to find something else. The big agencies have those positions covered.

Is all this uncertainty changing what gear you’re packing for the gig?

I want to travel relatively light. I want to be able to move quickly. I’m going to have a 400 f/2.8. It’s not like I’m gonna be running around with a 50mm and a wide-angle zoom.

Am I going to get fancy and bring toys to play with? No. I’m going to be basic and approach it more as a lightweight agile kit. That’s the plan. But the uncertainty makes packing tricky. Do I take remote cameras? Are they allowed? I’ve decided to bring the gear I need for remotes, but not as much as usual.

I did an image of all the gear I took to Rio. It’ll be way less. I took four checked bags to Rio and I’m taking maybe two to Tokyo.

Setting up remote cameras seems like a particularly challenging task. You need early access and permission to clamp cameras in different parts of the venue, right?

You need access. I don’t know how that’s going to play out, but I know that if I don’t have the gear there, then I can’t use it.

Can you talk a little bit about the other gear you’re bringing?

From that US Open last year, I was pretty interested in mirrorless, but that really did accelerate my move to the Canon R5. The silent shutter has opened up this totally different way of being able to shoot golf. For me, I’m all in on the mirrorless with the R5 and the RF lenses.

I’m bringing a 400mm f/2.8, because that’s a bread-and-butter lens for me at events. I just bought the 70-200mm RF f/4. I love f/2.8 lenses, and I have the EF and it’s a great zoom lens. But, I was doing golf and that thing is so small and so lightweight it’s stupid for me not to have it. The 400 f/2.8 is sometimes too long. That lens saves me on medical bills from my spine. The little things you put together make it easier.

It sounds like you have as much as you can figured out, at least for now. How long does it usually take you to prepare for an event like this?

I think most of the hard work is done after two months of thinking about what I’m going to be doing. I’ve been mulling over constantly how I’m going to approach it and what to take. That’s my process of dealing with big events. I start way early in my head trying to figure out what I should be doing and bringing. I want to be as prepared as I can be. Of course, it could all blow up when I get there. At this point, that wouldn’t surprise me one bit.