How Getty’s Olympics Photos are Shot, Edited, and Sent into the World in Just Two Minutes

A behind the scenes look at how Getty captures the Olympics 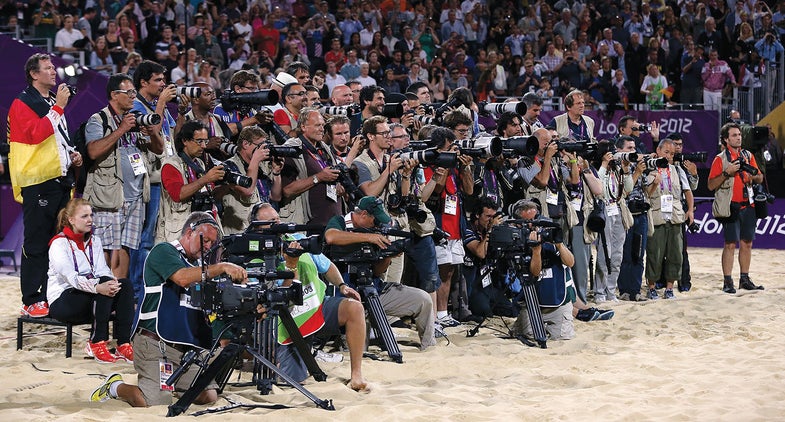 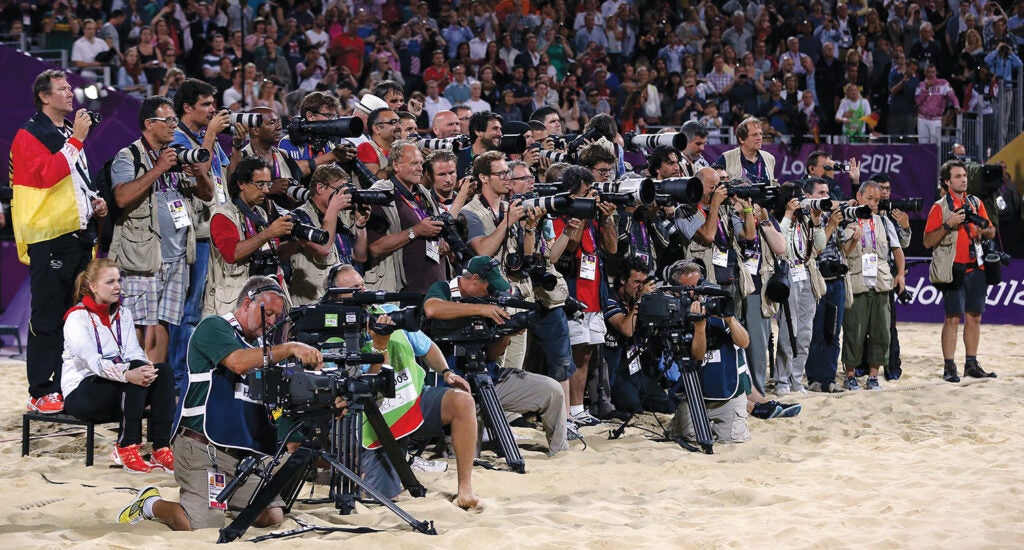 When a Getty images photographer shoots a picture at the Olympic Games, it’s often available to customers amazingly quickly—within a couple of minutes. But getting it there takes an enormous effort. In fact, the tech setup that makes this possible is years in the making. Here’s what goes into getting the pictures out.

“We have our first meeting with the [International Olympic Committee] around seven years before the games,” says Ken Mainardis, vice president of Sport Imagery and Services for Getty Images. “For Rio de Janeiro, we met with them just after they were awarded the games in 2009. We partner with the committee to basically link all of our photographers in the key photo positions that they work in back to our editing hub in the main press center. And that network takes years of planning, because it crosses cities and it has to be able to handle about 1.5 million images during the duration of the games.”

The system’s connective tissue is ethernet cabling, which allows individual photographers to wire in. “The latest top-of-the-range DSLRs from Canon and Nikon allow you to plug an ethernet cable directly into the camera so it becomes part of the network,” Mainardis says. “We have cables at key fixed positions—like the finish line of the pool or of the track—and if the photographers need to move they simply unhook the cord and put it back where they found it, then move onto another position and another cable.”

In certain locations—such as the Sochi mountainside at the 2014 Winter Olympics—the system relies on Wi-Fi hotspots. “Our preference is always on a cable because it’s reliable,” Mainardis says. “You don’t get the interference that sometimes you get on Wi-Fi. But in extreme environments, we use hotspots.”

Meanwhile all the work is transmitted to the mother ship. “When the photographer makes pictures, those frames travel down this network we’ve built and arrive instantaneously to our editors in the press center. In tests we just did, we were getting nearly 10 frames a second over that network.”

Getty Image’s tech crew has spent much of the past year testing the system on site. “We test it for load and performance at test events in the venues,” Mainardis says. “We’re able put it through its paces as if it were game time. We never want to send our team feeling like we may not have confidence in what we’ve installed.”

Ahead of the games, the entire crew arrives in the host city. “For editorial work, we send around 50 photographers,” Mainardis says. “And we run a commercial operation as well—working for the International Olympics Committee and the IOC sponsors—and that team is around 25 photographers. We’ll have 18 photo editors in the pressroom. With technical staff and support staff, that brings the entire team up to around 110.”

In addition to scouting venues and briefing photographers, the crew generates preview material during prep week. “We go live on July 29, and the Olympic opening is on August 5,” Mainardis told us this spring. “Most of the team is in place by July 25. In the week leading up we do a lot of features, training, stories from the venues—there’s a big demand for previews.”

Once the Olympic Games begin, the workflow is set. Each image—as an untreated JPEG—zooms from the photographer’s camera to the pressroom’s server network, where it’s accessed by photo editors using both Macs and PCs. “We have three stages to the production line,” Mainardis explains. “You have one editor whose only responsibility is to select the relevant frames.”

This is a fast but intensive stage: “If we’re shooting around about 1.5 million frames during the Olympics, we edit that down to no more than 85,000 finished images that will go out to the various services we provide.”

Any image that makes the cut is forwarded to the second editor. “We do some very minimal adjustments to color and contrast and usually a crop,” Mainardis says. These are done using conventional Adobe Photoshop programs. However, a proprietary software owned by Getty tags the images with some metadata—such as camera and exposure specs, dates, and locations—recorded by the camera: “Our software stamps each image with the data as it’s ingested into the network,” Mainardis says.

The final stage is to add specific data, such as names of athletes and details about the photos. This is applied by a third editor, who is also responsible for routing the picture to the relevant section of the Getty Images website and the proper transmission channels. “That third editor creates a narrative,” Mainardis says. “They’re finding the key elements of the story and the best standalone images, and then deciding where they are routed.”

While all of the photos that make it this far land on the Getty Images website, many are also wired to specific markets. “The content can be tailored to the customer’s needs,” Mainardis says. “And we now offer an API [application program interface], where a customer can integrate their CMS [content management system] with the back end of our website. We’re pushing content directly into your system, so you can benefit from the speed that we’re moving it.”

Speed, indeed. “If the stars are aligned, that process—from the moment the shutter is pressed, through the image selection and Photoshop correction, to the moment the data is applied and sent across our internal network to our customers— happens in around 120 seconds,” Mainardis says. “Watching these guys work is like watching a musical orchestra. It’s incredible how slick and efficient they are, looking at enormous amounts of content.”

The dream team of editors is chosen based on their performance at other sporting events throughout the year. “Many of our photographers actually began their careers as editors,” Mainardis says. “Editing other people’s work—especially very talented people—is a very good apprenticeship to becoming a sports photographer full-time.”

The editors often have an area of specialization. “That immediately puts them into contention for certain sports,” Mainardis says. “It’s highly competitive—everybody wants to be on the Olympic team. Some people make it, some miss out, and others go next time.”