The Co-owner of CreativeSoul Photography, Kahran Bethencourt, shares her tips for getting the most out of your next portrait session. Even if the subject's a six-year-old. 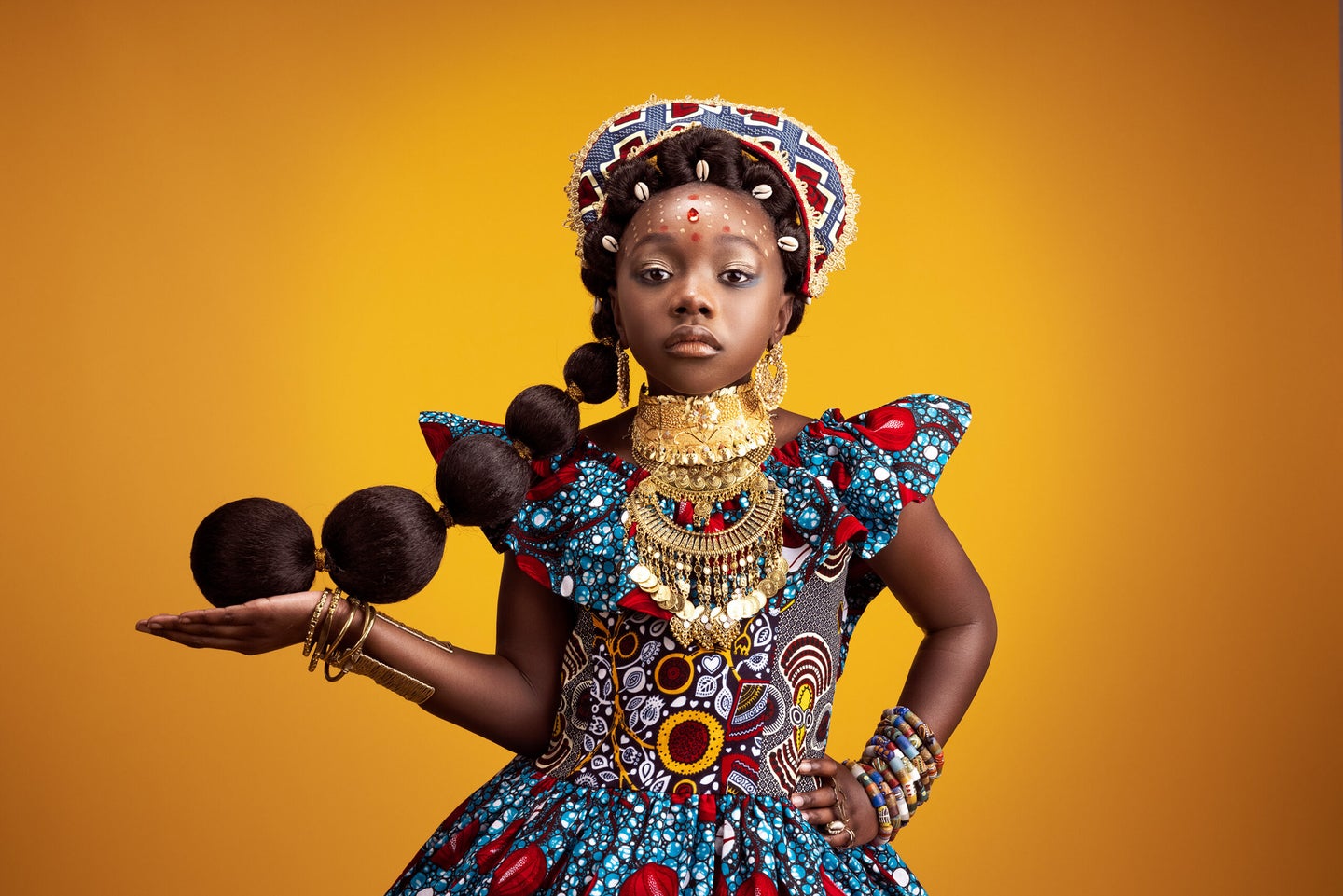 Kahran and Regis Bethencourt are the photographic duo behind CreativeSoul Photography—an Atlanta-based studio focused on capturing dynamic portraits of children that celebrate the beauty of natural hair. The married couple has been shooting together for over a decade, working on campaigns for children’s fashion and haircare brands, and their work has appeared in many places, including Teen Vogue, CNN, Glamour, Vogue Italia, and BET.com. Last fall they released their first photography book, Glory, which features over 100 images that showcase black beauty and shatter the conventional standards set forth by the beauty and fashion industry.

“When we got into the kid’s fashion industry we noticed that it wasn’t very diverse,” Kahran says. “A lot of the kids that had natural afro hair would have their hair straightened when they came in for headshots because the parents thought that’s what they needed to do to get their kid into the industry.”

That repeated experience inspired Kahran and her husband to start a personal project that celebrated kids with natural afro hair. That project has continued to influence their signature style. Here Kahran shares her tips on making the most of a portrait session with a kid.

Your portraits of children have a magical feel to them—like being inside a kid’s imagination. What sort of pre-planning goes into shoot days?

We typically send over a questionnaire and we ask the parents to ask the kids, “If you could have the shoot of your dreams, what type of shoot would it be?” Obviously, we get some really interesting responses. Kids are so imaginative, right? They come up with all types of things. We’ve had a futuristic DJ warrior or a ballerina superhero. From there we make a plan and make it happen. All the kid and the parents have to do is show up. We’re figuring out the wardrobe, I work with my hair and makeup team and give them the overall vision of the shoot and then a lot of the magic happens on set. About fifty to sixty percent of it happens in the planning and then the rest happens on set.

If you are handling all the wardrobe I imagine you have a pretty incredible prop closet at home.

Oh gosh! Our entire downstairs is our prop closet. We have so many different pieces. We’re constantly finding things from thrift stores; we also have a designer that works on our team and will make us custom pieces. I think we have seven or eight huge drawers of jewelry in our studio. A lot of times we have it already, but sometimes we are customizing new things. Regis used to do drawing and painting and so sometimes he is drawing on the clothes to make them more unique. I have so many pieces that are like, “I don’t know what I’m going to use this for, but I know eventually it’s going to be great.” My husband is always on me so like, “Okay, like we need to stop.”

How long do the personalized sessions typically run?

They are typically around four or five hours, which includes the hair and makeup. It’s not a full day of shooting, but it’s also not an in-and-out type of thing.

How do you approach lighting for the shoots?

Do you have any tips for correctly lighting subjects with darker skin tones?

Don’t over-lighten, that’s something that I see often. I really like for my skin to stay true to the tone and so I will often light it a bit darker, just because I know that I can brighten it up a little bit if I need to. But if it’s too overly lit, then it’s not going to give me the look that I’m going for. I would say that’s part of it. But then the other part also is the post-processing side of it. Again, really making sure that we’re not overly brightening the images. I know that there’s this light and airy movement right now, but I think when it comes to [portraits] you really have to kind of stay true to the skin tones so that you’re not blowing it out too much. The other thing is making sure that you have adequate color correction and color toning because that’s huge. You know, a lot of times I see skin tones that are a bit too yellow or too orange.

How do you keep kids comfortable and engaged during a session?

We typically work with kids between 5 to 13-years-old—that’s kind of our sweet spot. I think a lot of people when they think of kids, they think of toddlers. You have to know that with this type of session that will not work. Don’t even try it. They’re kind of on their own schedule, their own time. They’re not going to sit for this, it’s not going to work.

While they’re sitting for hair and makeup, one of the things I do is talk to them. I try to get to know them and feel out their personality type so that I can make any adjustments that I need to on-set. Sometimes you may have a kid that’s super outgoing. And for me, that’s a little bit easier than some of the kids that are super shy. Then again, If a kid is super outgoing, sometimes you have to kind of reel them back in [because] they might have tons of ideas. I am usually negotiating with them. If they have a certain prop and they want to use that prop over and over again. That’s when I’m like, “Okay, if you let me get three shots, then I’m going to let you use the prop.” For the ones that are a little bit shyer, then I’m just kind of talking to them, showing them the back of the camera so that they can kind of get warmed up. I ask them if they have anything that they want to do and I’m really just trying to play it by ear and adjust according to their personality.

One of my favorite parts of what we get to do is seeing a kid that may be a little bit reserved or shy, seeing their transformation. Sometimes it may not even happen right after hair and makeup—usually, it happens after they see the back of the camera and they’re like, “Whoa that’s what I look like?” And from there then you notice they start to open up and they start to run the show. Usually, the parents are so excited too—a lot of the time the parents see the potential in their child and their child may not see it in themselves. It’s really an amazing moment for both the child and the parents to be able to see themselves in a whole different light.

One of the good things is that we’re asking them in the beginning what type of shoot they would like. And so, half the battle is already done because we are incorporating things that they like. That makes it a lot easier. We just had one little girl who wanted to do a roller skate dance party. And one that wanted to be a fairytale lion. We’re incorporating things that they like so that we know it’s something that they are going to be excited about.

Did you have experience working with kids before you started photographing them?

No—and we don’t even have kids! I don’t even know why it started, but there was just something that happened when we were photographing families. We would always take the kids to the side for individual portraits. I think for me, kids are unlimited creativity. Like there are no limits. If we tell a kid we’re going to put them in a bubble wrap dress, they’re down. I feel like with adults, they have that reservation. With kids, I feel like we have total freedom to be able to do what we want because they’re usually down for whatever. So I think that’s really why we love working with kids.

At what point did you start to transition more into brand work?

I hadn’t even thought of brand work when we first started doing this. But when we started to photograph, especially kids with natural hair, it was at a time when there was what you would call a renaissance of Black women who were returning to wearing their own natural hair. When I was growing up, that wasn’t something that was embraced. It was at a time that the industry was taking off and we started getting brands that said, “Hey, I like what you guys are doing can you do that for my brand?” We kind of started off doing that for a lot of hair care brands and then started doing it for kids clothing brands and fashion designers. It’s cool to be able to stay true to our style, but do it for a brand.

Check out more of Kahran and Regis’s work at CreativeSoul Photography.