Erin Babnik has been photographing natural wonders since before the dawn of social media. Here she shares her best tips for finding your inspiration and respecting your surroundings. 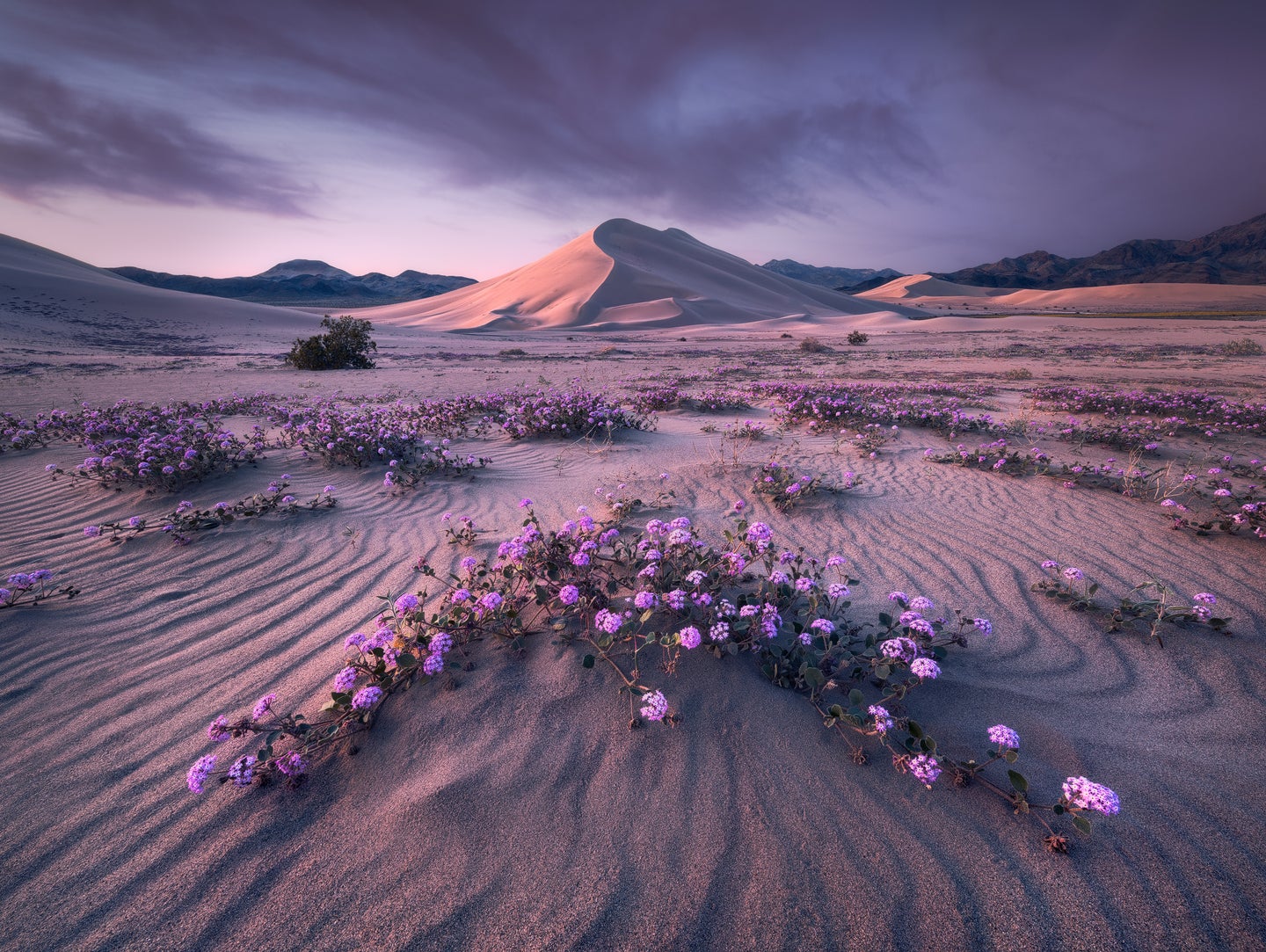 Nature is full of interesting and beautiful things. But creating a pristine nature photograph requires a lot more planning and preparation than driving to a geotagged Instagram spot and hoping to capture something great. Award-winning wilderness photographer and Canon Explorer of Light, Erin Babnik has been shooting beautiful landscapes since the days before social media. Her career photographing natural environments began from a place of curiosity. And curiosity is something she tries to maintain in her work to this day.

Here, Babnik speaks with us about her favorite places to shoot, essential gear and why it’s crucial to preserve these beautiful places for generations to come.

How did you get started with landscape photography?

Before I was a photographer, I was an art historian. I specialized in Ancient Greek art mostly and actually had to be a working archeologist as well. I did a lot of excavations in the Middle East. They required photographing objects so I could use them in my dissertation and develop an archive of photographs for teaching and research. I found myself going way out of my way to make the photos as good as they could be. I really enjoyed that process. I was getting really annoyed with all of the restrictions of trying to take tripods into archeological sites and having to ask for special access. Finally, it just dawned on me, “You know what? I used to love to just go out in the mountains and backpacking. It would be kind of fun to take the camera out there.” This was before the era of social media.

It sounds like you had a long-time love for the outdoors before you started photographing it in a more formal way.

I always took a little film camera with me, but that was just more so to document what I was doing. I totally got out of it, the more I got into academia, I was just spending all of my time in these dusty, underground libraries. I’d forgotten all about the stuff I used to love to do outside.

I was slowly already turning into a working photographer, even while I was still in academia. My photographs were getting good enough that other people were starting to hire me to do work for them. That led to stock photography work and eventually, my fine art landscapes started to bring requests for things that I wasn’t even offering, like workshops and post-processing instruction.

Finally, one day I was like, “You know what? The iron is hot, maybe I should strike it. I think I really just want to do this.”

Was it difficult to make the career change from academia to full-time photo work?

It was really an intensely emotional decision for me, after investing so much of my life into one career, to take a turn like that. But in the end, I decided that was the best thing I’d ever done.

I think the thing that was really holding me back for so long was the idea that I was giving up this other career. When I realized that actually everything I had done before: the lecturing, the teaching, the traveling to exotic places, all of that was just awesome preparation for what I’m doing now. I’m still teaching. I’m still traveling to exotic places. I still get up really early and get really dirty. It’s all the same, just repurposed.

Speaking of getting up early, how important is the time of day that you are shooting when creating quality landscape photos?

The most common advice that landscape photographers get is that the quality of your light is everything. But the time of day sometimes is actually relative only to a certain type of environment. Let’s say that you want to photograph a slot canyon. In the middle of the day, when the sun is high and can get down into that slot canyon and create bounce lighting, that’s going to be your prime time. Whereas let’s say you want to shoot a mountain scene, then maybe you want some low sidelight. That’s going to be an end-of-the-day situation, either sunrise or sunset. Timing is everything, but it all comes down to what your motivation is.

How much does patience play into getting good landscape photos?

Again, that’s one of those things that goes both ways too. Standard wisdom would tell you that you should come up with an idea and then wait for the right moment, return to a location as many times as possible, until you finally realize that idea. The other side of that coin is sometimes just being flexible and not having expectations. Being able to let go of them will enable you to see something that maybe you would have overlooked, or would have dismissed.

Where are some of your favorite types of terrain to photograph?

I have two offices, one in Southern California and one in Europe, in Slovenia. In Europe, I’ve spent a massive amount of time in the Dolomites. I started exploring that region before it was even really on the map for most landscape photographers. When I first started going there, again, before the age of social media, most Americans didn’t even know Italy had mountains.

That remains one of my favorite places to work, but I do a lot in the Alps too. In the United States, I tend to really like desert environments. I think that these two areas, the Alpine areas and then the desert, have something in common, which is that they are very changeable environments.

Mountain environments really change a lot with the seasons. A low atmosphere can make the landscape look utterly different from even one second to the next.  I love that. It’s the same thing with desert environments because they are always changing. The ground is literally changing a lot in places like Death Valley. It might be a lake one month and just this incredible pattern of polygons another month. You come back the next month, those polygons have all changed and it’s a dune field. I’m always looking for something that I don’t feel as though I’ve seen before.

With the rise of social media we’ve seen a lot of these once-pristine and remote landscapes getting too much traffic and getting destroyed. What sort of guiding principals do you use in your workshops to encourage newer photographers to respect the land they are photographing?

I’ve written and done a lot of speaking on exactly that topic because it’s an important one. One of the most important things I think to keep in mind for any photographer is that these environments are not trophies to be hunted and collected. And really, the magic doesn’t even lie in the location. The magic lies with you, the photographer. Wherever you go, you’ve got to make your own sunshine. Those are going to be the most meaningful photographs for you and they’re also going to probably be the ones that do the best for you in the long run.

I think what’s going on with many of these places is just overuse. Too many people are being directed to too few places because they think that’s where the magic lies. And if you spread people around the planet more, these places will have a chance to recover. Basically, it’s about educating the public on the sorts of things that they might not realize are harmful.

What are some examples of things that people are doing that they might not realize harm the environment?

Picking wildflowers or pitching a tent on top of wildflowers can kill them to where they will not come back, ever. If you move a rock, that might cause soil erosion that will damage an area. Walking on any kind of non-durable surface too much can make it never come back. In the Columbia River Gorge photographers have gone to photograph certain waterfalls and they all like to stand in the same spot and that spot used to be lush with ferns, and now it’s just dirt because of too many feet. The environment can’t heal itself.

Being very aware of the difference between a durable and a non-durable surface is important. Understanding things like cryptobiotic soil, which helps to hold the soil together—without it, an area can become just an absolute dust bowl. Critters live under rocks. You move the rocks, you deny that critter its home. And then there’s a knock-on effect that can devastate an environment once you start messing with its little ecosystems. So take only photos, leave only footprints, but don’t leave the footprints on the non-durable stuff.

In addition to your camera equipment, what sort of gear are you taking with you when you go out to take photographs?

A lot of it depends on the environment. One of the things I always have with me, that really has nothing whatever to do with camera equipment, is this little mat that folds up into three or four sections. I can use that for so many things no matter where I am. If I’m in a desert, I can use it to shield my camera from some glare or it can make a little roof over my camera. If I’m doing a low to the ground shot, where I need to be so close to the ground, I can sit on the thing. If I’m camping somewhere, and I’ve got a campfire, it makes a great way to fan the flames. It’s extremely handy.

My first aid kit always comes with me. I also have a spot locator, which is useful if I’m out in remote areas, no matter where I am. Then there are all the layers. There’s actually a lot you need to carry as a photographer, so clothing layers, maybe food, snacks, trekking poles, all kinds of stuff.

What advice would you give someone who wants to get started with landscape photography?

Explore and experiment a lot. That’s the way that I developed as a landscape photographer. And I really stand by it. Learning to see is the most critical part of really developing as a photographer and the best way to do that is to get out and experiment with things. Try things and find things to photograph. I say often that exploration is the key to creativity because the more that you find to photograph, the more that you find yourself. So if you can get out there and find stuff, you’ll shortcut across that barren landscape of all the stuff that has been seen so often that people don’t respond to it anymore.

Go to the stuff that excites you. Follow your own nose and you’ll probably progress more quickly and hit upon solutions that are more exciting to you sooner. See for yourself, but also have some other fresh eyes on it to help you see what you may not be noticing.