The Europe-based, Australian-born photographer is on a mission to encourage women—and fellow creatives—that their stories, dreams, and projects have value. 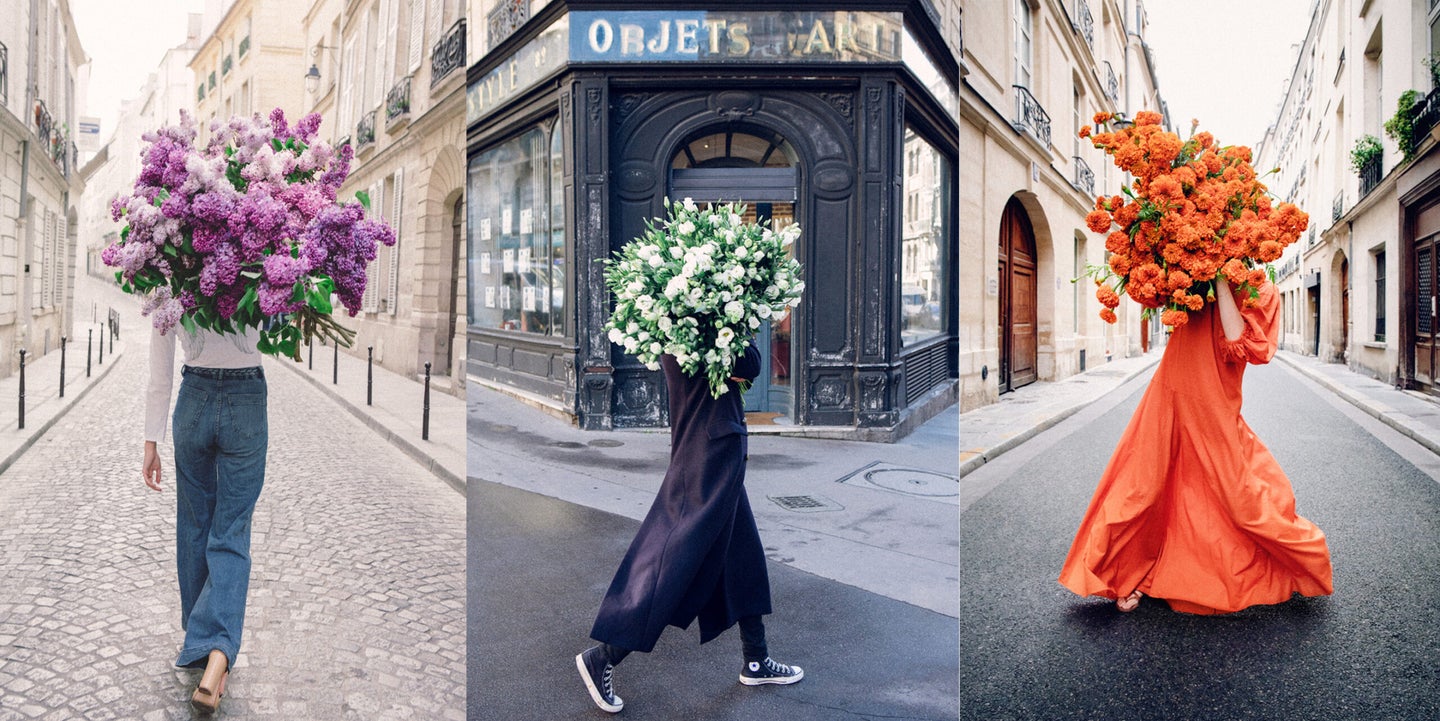 “I’m obsessed with romantic flowers,” says Carla Coulson, an Australian-born photographer who splits her time between Paris and Greece. On the day I interviewed her, she was sitting in her home in Greece, surrounded by prints she made of the Italian coast, on which she made a name for herself. But today, we’re talking about flowers. She turned an obsession for the poetic, the whimsical, and the colorful into a series, “Jeune Fille en Fleur” (French for “young girl in bloom”). Each portrait, though faceless, offers a story. Coulson doesn’t work with professional models—she knows the young women hiding behind every bouquet, whose own journey inspires the body of work.

“I think everybody…needs to be celebrated for who they are and their authenticity,” she shares of her vision. “Becoming a woman is very, very fragile, and so many young girls don’t realize how fabulous they are. So, that was really the idea behind it, to celebrate young girls.”

Coulson hadn’t intentionally created the series, but rather stumbled into the idea. At the time, she was newly transplanted in Paris, 15 years into her career, and preparing to launch a series of Italian prints. Still, there was a yearning to, despite her experience, establish herself.

“I was just at a crossroads and I wanted to create my own work and I wanted to be taken seriously,” she remembers. “I had been walking around Paris, just clicking on my iPhone for my morning walk, just to really please me. But what I realized was the photographs that would get the most clicks were flowers and doors.”

She then began to ask herself how she could incorporate the two subjects and make them her own. In the beginning, she staged shoots similarly to those in her fashion days—but quickly discovered the setup to be stiff, rigid, and too perfect. Thankfully, though, Coulson found herself surrounded by a bevy of inspiration to which she could pivot: The young women who worked in her office, including her niece.

“I was having these conversations [with the girls] that really reminded me of when I was young, about low self-esteem and [feeling] they’re not good enough; always wanting to be in love, but the right [person] never comes along. All of a sudden, I thought, ‘Wow, this is me. These girls are living my life. How come they don’t get how fabulous they are?’ I’m looking at these beautiful young girls and just thinking, ‘if you only knew how great you are.’”

Reworking the idea, Coulson eventually settled on a more relaxed concept that challenged her to let go of the control she had been used to in the fashion world—and the results paid off. With just her Canon 5D Mark III, a model, plenty of flowers, and the streets of Paris, she created the now 20 images that comprise the collection. And as she continues to discover more girls’ stories, there is a possibility that new works will appear.

“Inspiration really came from where they were in their lives,” Coulson says. “It’s women who inspired pretty much the entire series. That’s why they’ve kept going, because I keep feeling the stories aren’t finished yet.”

For “Jeune Fille en Fleur,” Coulson had the luxury of a personal connection with each girl she photographed. However, many photographers will not have the opportunity to build a personal history with their subject before the day of the shoot. She shared a few things she does when photographing women that help her achieve the happy, carefree images she envisions.

“I want people that are happy and relaxed and laughing and very alive,” Coulson explains. “I think it’s important to recognize what you want, and then how to get that. It’ll be really embarrassing if you saw a video of me taking pictures because I’m making them laugh. I’m saying silly things. I’m embarrassing myself. And this actually lets them kind of feel like, ‘Oh, this is no big deal,’ or ‘This is fun.’ We’re all just here hanging out, having fun, playing around.”

“Spend time with them definitely before you get your camera out, talk to them, be interested in who they are, what they’re doing, all that sort of stuff,” she advises. “The other thing I’d do when photographing women for portraiture is make them feel really good. I worked with a hair and makeup artist and I think that gives women confidence. And when women have confidence, they feel good, they feel beautiful. And if they trust you, they’ll do anything.”

Granted, hair and makeup may not be in every photographer or client’s budget. However, communicating with a subject about how they can look and feel their best before the shoot can go a long way in helping them be prepared.

Advice for working with flowers

Flowers are finicky and rather mercurial; they won’t last long out of water, so learning to work quickly and go with the flow is key to success.

“Have a great florist, ask them how to take care of them,” Coulson advises. “Often I would have assistants with me and we’d…be cutting them sometimes a little bit to put them back in the water and give them a drink while we continue. It depends on the flowers. Some of them, like dahlias, for example, you can destroy those guys with just a big gust of wind. So really take care of them. Pay people if you need to, or get friends to take care of the flowers.”

Coulson also emphasizes the importance of having a plan so that you waste as little time as possible finding and setting up your location.

“Go out and scout; I go and get all my ideas together,” she says. “I ended up working with one florist in Paris and he would help me deliver directly to the location sometimes, so the flowers were in the water until the last minute. You don’t have that much time and once they’re wilted, then your party’s over.”

To the creatives—don’t give up

“We need to save the world and by saving ourselves first, then we can go out and do really great in the world. And I think it is really important for creatives to trust what they do is enough.”

It’s easy to get overwhelmed with your own ideas and even easier to fall into the comparison game by looking at all the things others are creating around you. But Coulson is adamant that even if your project doesn’t pull together right away, even if it flops at first, even if you have to rework it—don’t give up.

“When you’re connected to an idea, don’t give up if it’s not working out straight away, because it didn’t work out for me straight away, and I stuck with the idea because I like the idea,” she asserts. “I like the flowers. I like the girls. I was willing to keep playing around with it and simplify it and change tactics a bit. Because if I showed you my first photograph, I’ve got a girl with a huge bunch of flowers, but they’re all mixed flowers. They’re not one color. She’s got a skirt on, she’s got high shoes on. She’s totally different.”

For those who are feeling stuck, Coulson encourages creatives to seek the story in themselves while being attuned to what happens around them.

“If you look inwardly instead of outwardly, you’ll find your own story and your own way to create the work that you love,” she says. And for the self-doubters, push aside the hesitation and value what you like.