The right anges and light can make all the difference 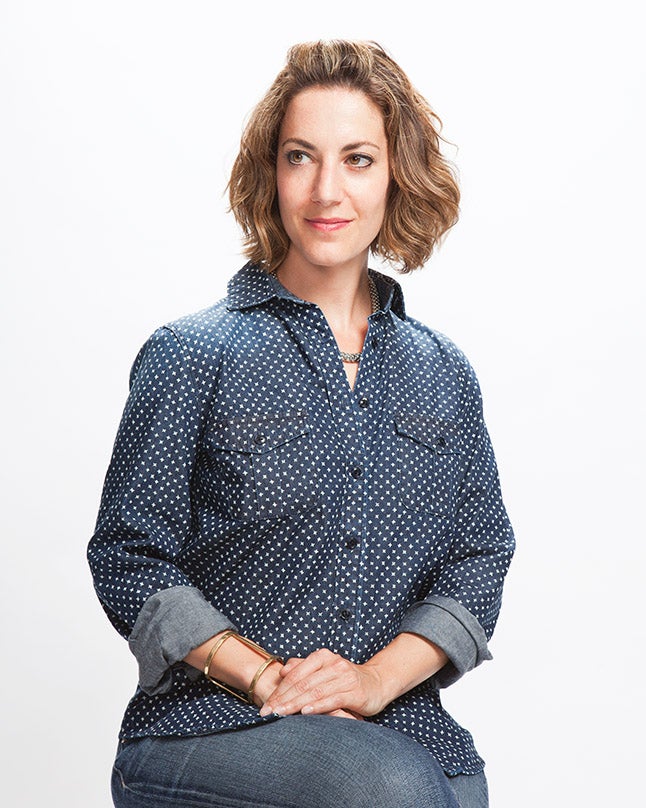 Making the leap from candids to posed portraits of friends and family can be stressful, even for top photographers. When posing people, uncertainties abound: How should you light your model? Which lens is right? How do you draw out great facial expressions? Follow these five tips from photographer Patrick James Miller to help get you started.

Posture is paramount: Start with your subject standing straight, with chest and head lifted, though not in an exaggerated way. Beware slouching shoulders and arms that dangle lifelessly (right).

Posed, full-body portraits are among the hardest people pictures to nail. With face, body, and limbs to coordinate, they can present a complex set of visual elements to harmonize.

Begin with the right camera position. “For these full-body shots, I started with my camera at about Amy’s chest-level,” says New York–based editorial shooter Patrick James Miller. “I work in a straightforward style, and a level, chest-high camera introduces little or no distortion.”

He adds, “Sometimes, though, I will lower the camera slightly, and aim up, to a make a proud, powerful statement about the subject. Other times, I lift and tilt the camera down, for a more intimate, sometimes flattering look.”

Another tip: Work the planes. To add dynamic tension, experiment with aiming your subject’s face, shoulders, and hips in different directions. Place the left shoulder slightly forward and the hip slightly back, for example.

It’s also important to show space between the arms and body. Bending an elbow can help highlight the subject’s waist, while flexed elbows, wrists, and knees tend to add energy.

Asking your subject to put the weight on the back leg frees up the front leg to become an expressive element. In the larger shot here, Miller had Spector shift her weight onto her left foot, so her right leg could cross her body, giving the legs an active triangular composition. “Shifting weight allows for the subject to look less flat-footed and is a great way to add shape to the pose,” the photographer says.

Tilt and cock the head. This can suggest personality and intimacy, but don’t go too far. And watch the hands. Can’t get them to look right? Hide them as Miller did.

Finally, try adding a prop. “Having something for your subjects to lean against, like a chair, can relax them,” says Miller.

Hot Tip: When directing your subject, request that changes made in the placement of body, limbs, and head be very minor. Slight placement differences can affect a pose in big ways. Instead of simply asking that a subject “look left,” for example, ask for a very small turn to the left.

2. Gear choices: Begin with the lens

Why are wide-angle lenses anathema to portrait shooters? These two pictures tell the story. Miller made the larger shot with a classic 85mm portrait lens and the smaller one with a standard-range zoom at 35mm. The results are like night and day, and here’s why: To fill the frame with a portrait subject using a wide-angle lens, you must move in very close. In the photo taken at 35mm, the camera was about 3 feet from our model, while for the 85mm shot, the camera was about twice as far back. The closer your camera is to the subject, the more exaggerated are the parts of the face closest to the lens. At 35mm, the nose appears much larger than the eyes because it’s significantly closer to the camera. At 85mm, the relative distance between the eyes and the nose is visually insignificant, and we see much less apparent distortion.

The correct lens isn’t the only useful piece of equipment for posed portraits. Miller mounts his camera on a sturdy support—a camera stand, for this shoot—and he brings a laptop along for shooting tethered. The former prevents camera shake, and the latter lets him share images in real time with his portrait sitters. This collaboration gives subjects a sense of confidence and control.

Hot Tip: If all you have is a wide-angle lens, limit your posed portraits to full-body shots; don’t attempt half-lengths or tight headshots. Also, stick to environmental portraits and step back to include a lot of colorful background in your compositions. The farther back the better!

Direct vs. Indirect sunlight: Contrast in direct sunlight can force you to choose between highlight or shadow detail. Above right, Miller chose the shadows and sacrificed all highlight detail in the face and blouse. His exposure was at f/5.6, ISO 100, and 1/125 sec (left) and 1/160 sec (right).

Taking your posed portraits outdoors can improve the variety, mood, and character of your backgrounds—certainly more easily than what you can achieve indoors. However, shooting outdoors often introduces its own problems, the most serious being unflattering light. As seen in the right-hand picture below, direct sunlight creates dark, contrasty shadows in Spector’s eye sockets and under the nose and chin. The solution is simple, though: Have your subject step into shade, to even out the sun’s bright highlights and dark shadows for more flattering portrait lighting.

What if you find the perfect outdoor backdrop, but the setting has no shade? Do as Miller did and create your own. For the left-hand picture, his assistant held a 2×3-foot diffusion panel above Amy Spector, creating an oasis of soft, very effective light for a much more flattering shot.

Another way to improve portraits made in direct sunlight? Place a reflector immediately below your subject’s face and angle it up to bounce sunlight back up into the eye sockets and under the chin and nose. The face will be more evenly lit—and also brighter than what’s possible in shade. This added brightness can afford you faster shutter speeds or smaller apertures, either of which can render the unlit areas of the background darker, causing your subject to stand out more emphatically.

Hot Tip: On a partly cloudy day, your best bet is to wait for a thinly overcast sky. The light under such conditions can be bright enough for handheld exposures, as well as soft, even, and highly flattering.

Because of its convenience and low cost, on-camera flash exerts a strong allure for novice portraitists. Resist it! Your results could resemble the right-hand image below. Compared with the picture on the left that was lit with a studio strobe and softbox, the direct-flash portrait appears flat and harshly lit, with shiny bright highlights and a distracting shadow behind the subject. The portrait lit by softbox is more flattering, with greater dimension and shaping across the face and softer highlights in the complexion. It avoids the contrasty facial sheen of direct-flash portraits.

Note that by placing his main light off axis, away from the lens, Miller was able to aim the softbox down onto the model’s face. “I like to have my key and backlight kind of high, shooting down, because it’s directional and natural, kind of like the sun,” says Miller. This strategy also created the shadow across her neck that serves to set off and “present” the face in a flattering manner.

Conversely, the on-camera flash illuminates the neck and face equally, giving the former an unwelcome prominence. Raising his light also buried the shadow cast behind Spector. As a result, she seems to exist in her own timeless world, one without the confining walls suggested by the on-camera-flash shadows.

Hot Tip: If you must light with an on-camera flash, try bouncing its output off a nearby white wall or ceiling, turning either into a giant reflector—without aiming the flash directly at your subject.

_Direct your  subject: Aiming a dominant eye toward the camera (left) can suggest an alertness. Another trick: Have your subject tilt the face upward, and then, on a diagonal, slowly lower it as you shoot. Repeat along the opposite diagonal. _

The closer you zoom in to a portrait subject, the more weight the person’s facial expression carries. At first, it may seem difficult for novice portraitists to coax relaxed and expressive looks from their subjects, but with practice it gets easier.

Miller says he starts by putting his subjects at ease. “Before a shoot, I do some homework,” he says. “I try to find out if there’s anything the subject and I have in common. Something we could talk about. I may also show a subject an example of the kind of portrait I want to take. If they like the example, it can build trust. Also, subjects who are parents love to talk about their kids. It can really open them up.”

The good news? The difference between a deadpan, lifeless expression (right) and one that suggests a rich, lively intelligence and vibrant inner life can be achieved through very minor tweaks to the face and head: A slightly lifted eyebrow (left) or a tipped or tilted head can be enough.

“I’m always on the lookout for unexpected moments,” says Miller. “The seconds right after a person laughs, for example, often produce unguarded and natural expressions that can be very charming.”

Hot Tip: When he zooms in to focus on a person’s facial expressions, Miller will often place a black flag beside his subject, and opposite to main light. As in this shot, it darkens the shadowed side of the face, which accentuates its shape and adds a sense of depth and dimension to the image.