Q+A: Corey Rich On The Increasingly-Complex Relationship Between Photography and Cinematography 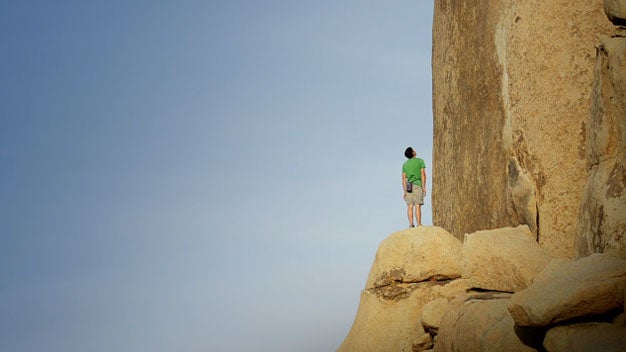 To show off the video capture capabilities of their new flagship DSLR, Nikon put prototypes of their D4 in the hands of pro photographer and filmmaker Corey Rich. The result is a short film called “Why,” which consists of three short athlete profiles. The video is undeniably beautiful and Corey is incredibly talented, so when I got the opportunity to pick his brain about the state of both still and video capture, I jumped at the chance.

WHY – Nikon D4 Release Video from Corey Rich on Vimeo.

You shoot video and still photos at the highest level. How do you classify what you do?

Some guys say “I’m an artist,” or “I’m a photographer,” or “I’m a videographer.” But, I’m a visual storyteller. That’s the way I define myself. Visual storytelling means I want to use all of the tools and media that are at my disposal to communicate messages. I want as much function in that camera as possible. You don’t have to use it. If you don’t want to shoot video, just never toggle that switch over and start recording video. You can stay focused on shooting still. I’m a still photographer too, but I’m also a filmmaker.

That seems to be an increasingly common attitude. How big of a part do you think the new breed of HDSLRs plays in that?

I remember the D90 rolling out a couple years ago and reading a one-page article in some magazine. It was by one of their technology reviewers who was obviously not a photographer, but he made some statement about how DSLRs that shoot video were going to change the way we make films. He called it right. Look at where we are just a few years later.

Is gear really the driving force between the convergence of the media or does accessibility play into it as well? Before the web, it doesn’t seem like there would really be a place for a 7-minute film beyond something like traded VHS tapes.

Two things are happening. The tools that are available are getting so much more sophisticated. It’s purpose-driven to enable us to spend less time fiddling around with the technical aspects and spend more time on the creative. Simultaneously, the delivery mechanisms have become more more widely available. We’re no longer limited to VHS tapes and camcorders. We have D4s and the internet. It’s incredible to me that we could post “Why” on Vimeo and five days out we would have 300,000+ visits to the page. You couldn’t do that before the internet. You couldn’t print that many tapes and ship them if you wanted to, which you wouldn’t.

The film isn’t just appealing to photographers and film makers. We have three of the best athletes in the world in the film, so anyone that’s interested in mountain biking or climbing or kayaking will have interest in the film. It was very difficult at one time for someone’s work to touch all of those industries at once. There wasn’t enough crossover. But the web has enabled that.

Some people see video cutting into the photography field, not just at the equipment level, but on every level. Do you see that happening from your perspective?

Years ago it was very difficult to shoot with film, let alone cutting it. You would never dream of doing something like that. Today, you can do it with your compact camera or your mobile device and I think that’s a huge positive. I’m not sure if I see any negative in that. There will always be a need for high-end single images and those are still very hard to make.

Years ago I helped do a scout for a film by Ridley Scott’s son, Luke. What was interesting about watching him work on this location scout was that he was carrying around two Nikon D3s. We would show up at the location and he’d look at it like a still photographer. He would sketch with the cameras. He’d make frames and he’d look at the back of the camera. He was thinking about how he was going to do the motion sequences. I realized the way he saw was different than all of my still photography colleagues. He was thinking with that filter of motion. That was the first time I realized that those guys see in a different way.

When I say that this convergence of still and motion imagery is propelling our industry, I think it’s forcing guys like me to see in new ways and push myself visually. The same thing is happening in the motion world. They’re looking at photographs and saying, “How are they doing that?”

Do you think it’s fair to say that a child born today will probably never really differentiate between still and video cameras?

Yeah, I think that’s probably true. It will be rarer and rarer as time moves on to have a camera that captures still or video. It will have to be something unique like a large format camera.

As someone who has had success in both media, can you offer any advice for someone who comes from a photography background but is trying to pick up some video skills?

I think one thing that I try to do a lot is that I try to watch movies and television while paying attention. Don’t just sit there for entertainment. As still photographers, we know how to dissect an image that’s hanging on the wall. We can look at a Bill Frakes images and we can try to figure out what exactly he did to make that image. Were there lights used? Why is the depth of field so shallow? That’s the exact thing you need to pay attention to when you’re delving into motion. Even crappy evening television, you can watch the way the camera is moving and start analyzing how they’re doing it.

So, you can count watching TV as doing homework.

A lot of it is very fundamental stuff. You don’t see the camera shaking, so you ask yourself how they did that. “Oh, they must be using a tripod. Wow, when the camera goes from left to right, it’s pretty smooth, they must be using a fluid head.” That’s a great exercise you can do pretty much anywhere. In fact, you can sit in the back of a taxi cab in New York City and leave that little TV on and learn something about film making.

Now is the ultimate time to be delving into photography or video of any kind because there’s so much information available on the web — so many tutorials. You can’t believe everything you hear on the web, but there are a lot of fantastic lessons you can get out there really easily. It’s worth spending some time just searching YouTube for that info.