How To: Use Backlighting for More Dramatic Still Lifes

Bring out those translucent hues the natural way, with light. 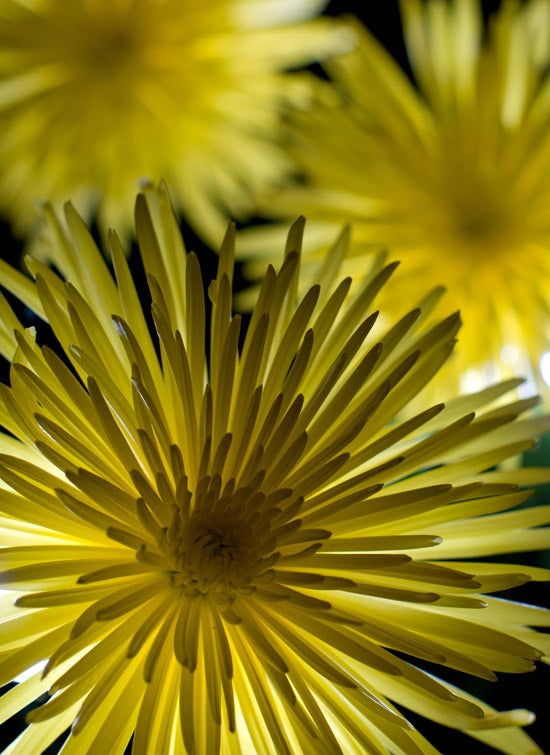 Last time around, we showed how backlighting can define the shape of a portrait subject —or any opaque object—by etching a bright white highlight, called a rimlight, around its outer edges. But it has other uses, too, as Christoph Seiler, 37, a research scientist from Philadelphia, discovered when he tried it out with translucent subjects.

“I made this picture last winter,” says Seiler. “It was gray and wet outside, and I was craving bright spring colors. I picked up a handful of yellow spider mums and experimented with inexpensive shoe-mount strobes to find a setup that worked for them. I quickly discovered that backlighting really brought out their color.”

It also brought an unusual, spiky edge to what’s clearly not a conventional floral study.

Aiming a light through a translucent subject and toward the camera has its problems, though. Flare, for one, reduces contrast and color saturation. “To keep the backlights out of the camera’s lens, I narrowed the flashes’ output with snoots that I made from black aluminum foil,” Seiler explains. “And I changed the position, power, and aim of the three backlights until the mums’ color was intense and flare was not. It took about 2 hours and dozens of trial-and-error shots.”

As for exposure, Seiler set his strobes to manual. “That gave me a consistent and adjustable lighting. I started by setting an aperture that would throw the background flowers out of focus and create a sense of depth. Then I manually set the output of each light independently, and finally fine-tuned exposure by adjusting ISO.”

Want to try this yourself?

He started with small halogen lights, which let him analyze lighting effects without the time-consuming requirement of instantaneous-flash test shots. The problem? The heat generated by hot lights placed close enough to shine through the flowers quickly wilted them. Using flash was more practical.

**(B) **The flashes were mounted on two Cullmann 3090 tabletop tripods and a single Joby Gorillapod.

**(C) **Seiler focused the output of each flash with snoots he made from BlackWrap, black aluminum foil.

**(D) **To preserve detail in the centers of the flowers, he frontlit them with low-power manual pop from a tripod-mounted Metz 48 AF-1.

**(E) **He fired all four strobes wirelessly from the camera position using an inexpensive, eBay-sourced PT-04 radio-slave-based flash triggering system consisting of a transmitter and receivers (not shown) on the four flash units. He processed the images in Adobe Lightroom 3.