Imaging the Brightest Supernova Ever

How do astronomers record images of deep-space objects? 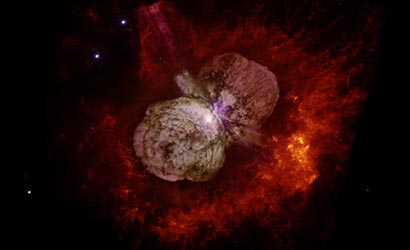 Scientists announced this week (May 7) that they had discovered the brightest supernova ever observed, in a distant galaxy about 240 million light-years from earth. The head of the discovery team, Nathan Smith from UC Berkeley, discovered the exploding star in the galaxy NGC 1260 (in the constellation Perseus) last September, and astronomers have been following its behavior since then.

What does it take to get an image of an exploding star 240 million light years away? A big telescope, a hefty CCD, and liquid helium! The infrared image below was taken by Professor Josh Bloom of UC Berkeley. The special CCD detector used has to be cooled by liquid helium to allow it to record IR wavelengths.

The faint green bright area on the left in the image is the galaxy’s core, while the brighter blue-white area above it to the right is the supernova — a single star far outshining the millions of stars in the galaxy’s core.

One reason this particular supernova interests astronomers so much is that the same thing could happen in our own galaxy! A star about 7,500 light years from Earth, Eta Carinae, shows signs that it could follow SN2006gy to an explosive death. At that distance, the exploding star would be easily visible during the daytime, and at night you could probably read a book from the light it gave off.

Fortunately, Eta Carinae’s “jets” of exploding star stuff are pointed away from Earth… so while we’d see a great light show, we would probably be spared the massive radiation bursts that would head out along these jets. But it might just mean you’ll be able to use a lot less flash for outdoor night photography!

For more information on astrophotography, and how you can make some pretty cool images on your own, check out Paul’s How-To: Astrophotography 101.

Paul LeFevre is a photographer, writer, and astronomer living in Southern California. He can be reached at plefevre@hughes.net.