Where, when and how to photograph ducks and geese. 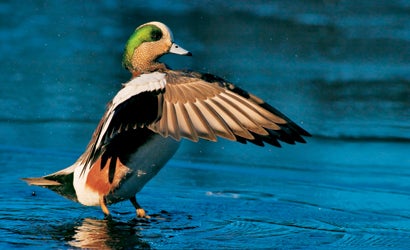 You don’t need to trek into the wild to find waterfowl. City parks and wildlife sanctuaries are ideal for photographing ducks, geese, and swans. Not only are they easily reached, but in these spots the wildlife are used to having people around. Another advantage? You don’t need outrageously hardcore gear. While I own some super-long, super-fast lenses, as well as teleconverters, more casual shooters can do well with something along the lines of a 75-300mm zoom. When it comes to getting captivating waterfowl photos, timing and technique count most.

Here are 10 specifics to keep in mind:

1. Get out often. Late fall through early summer are the best times to photograph waterfowl. You’ll find fluffy newborn goslings and ducklings in the spring. Later in the summer, the birds molt and look scruffy.

2. Join the flock. Waterfowl are most active from shortly before sunrise until midmorning, and then again from midafternoon until after sunset. I like to arrive an hour before these prime times (yes, that often means showing up in early-morning darkness) to let the birds get accustomed to my presence. And when you move around, do so slowly and quietly. Bring a small foam pad to sit or kneel on; you’ll be less threatening to the birds if you’re low to the ground. A tripod that gets low is also important. I use a Manfrotto 3021 (starts at $187, street). It’s solid, stable, and goes down to 8 inches.

3. Watch the light. That the birds are active when the light is best is a wonderful coincidence. Those soft, warm, low-in-the-sky rays couldn’t be better. When a bird is lit by an early or late sun from the front or side, you’ll get an attractive catchlight in the eye. It’s a detail that separates a great bird photo from an also-ran. And with mallard ducks, buffleheads, and wood ducks, a beam of directional light hitting the right way brings out the full spectrum of iridescence in their head coloring. Watch the mallard drakes carefully. Just by turning his head a fraction of an inch, a male’s head coloring can change from nearly black to a splendid green.

4. Study their moves. Pay close attention to the birds’ movements, and soon you’ll be able to predict what they’re about to do, and plan your shot accordingly. Most ducks, geese, and swans bob their heads up and down, call out, and turn toward the wind before liftoff. Dabbling ducks, such as mallards, take off almost vertically. Diving birds such as coots require a running start, as do swans and geese.

5. Mind the wind. Calm days are best for waterfowl portraits. (When the wind blows, the birds are more nervous and keep their distance.) Mornings with an east wind and afternoons with a west wind are most productive for flight photography, because birds often take off into the wind and land against it. This means you’ll have the light behind you, shining on your subjects, as they come toward you.

6. Backlight right. Swans look dramatic when backlit, especially when splashing in the water against dark backgrounds. Sunrise and sunset are good times to silhouette birds against dramatic colors. Look for ripples, patterns, and reflections in the water to add further impact to your image.

7. Act quickly. Waterfowl can be fast, and often require speeds of 1/500 sec or less to freeze their motion. Don’t be afraid to boost your ISO to keep a fast shutter speed. I often shoot at ISO 400. But don’t overlook using slow shutter speeds for creative images. For instance, if you’re panning birds in flight, try something in the 1/15- to 1/125-sec range. The idea is to render the bird sharply while blurring the background.

8. Expose accurately. Preset your exposure as soon as you arrive at your location. Either spotmeter a midtone or use automatic exposure with evaluative metering. Darker- or lighter-toned birds may require some exposure compensation. I’ll often work up to 1 stop in 1/3-stop increments to either side of the meter reading. And digital shooters have the advantage of not only instant image replay, but also the histogram. Study it! I like the histogram to stack up as far to the right as possible without clipping the highlights.

9. Predict your focus. When photographing waterfowl in flight, use your camera’s predictive-focus mode, and lock the sensor onto the bird as early as possible (usually this requires a half-press on the shutter button). Then, continue to hold the sensor on the bird as it moves toward you. I try to keep the sensor on the bird’s head or neck while shooting. To help with faster focus, set the focus limiter on your lens (if you have one) — that is, tell the camera to search for subjects only beyond a certain distance. This will keep your lens from wasting time hunting for subjects in the foreground.

10. Make space. When photographing birds in flight, don’t center them in the viewfinder. That makes for a static image. Instead, give them room to move in the frame. Leave some open space ahead of the bird — this will imply that it is going somewhere.