The GoPro Hero 7 Black cranks up the smoothness. 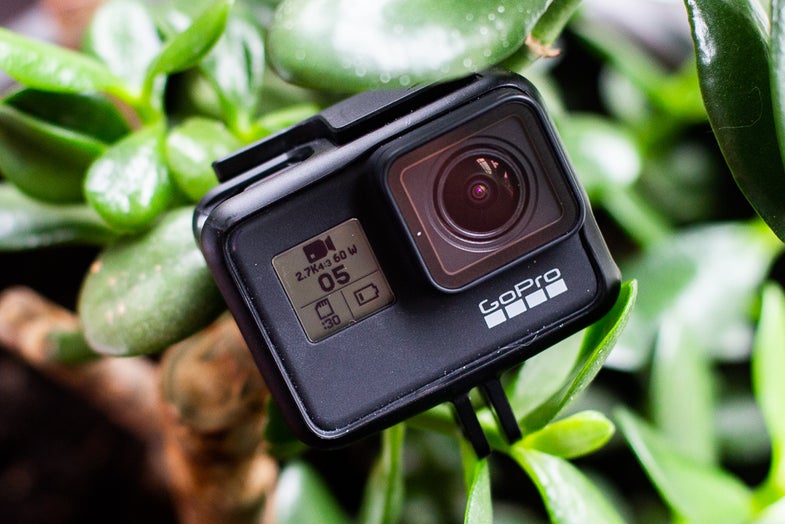 The GoPro Hero 7 Black isn't much different on the outside, but there's a lot more power inside. Stan Horaczek
SHARE

Lots of action footage is meant to give you a sinking feeling in your stomach. Whether it’s a mountain biker taking a leap of faith off a huge drop, or just a little kid in a home movie tackling the big slide at the playground for the first time, that POV view has a powerful impact when you watch the footage. Unfortunately, that kind of shot also can come with another stomach feeling: slight nausea from shaky, jiggly footage. For its new Hero 7 Black camera, GoPro has developed a technology it calls Hypersmooth, but behind the fancy name is an advanced image stabilization tech that it has been refining for more than four years.

GoPro is using digital image stabilization, which means it does not rely on moving parts inside the camera in order to counteract shakiness.

Like any kind of shake-reduction, digital image stabilization requires a set of internal sensors including an accelerometer to determine how fast the camera is moving, as well as a gyroscope to observe the camera’s rotation. The camera’s processors then interpret that data to get a clear picture of how the camera is moving through space.

“We crop in about five degrees around the edges,” says Nick Gilmour director, product management at GoPro. That’s not an insignificant cut into the frame, but since GoPro is working with a lens that’s much wider than that on a typical smartphone, it still offers a massive field of view.

This type of digital image stabilization has some internet limitations. For instance, once you hit the edge of that buffer, you can get an abrupt stop that feels unnatural. In order to combat this effect, GoPro considered the way the camera approaches those edges, creating a more gradual transition to the limit rather than a hard stop.

This ability to analyze a scene comes from GoPro’s GP1 chip, which is a piece of dedicated image processing hardware that performs some similar functions to Google’s Pixel Visual Core and Apple’s new chip in the iPhone XS Max. The new GoPro Hero 7 now has 2 GB of RAM dedicated to crunching imaging data and interpreting info collected from the sensors.

As a result, the image smoothing that once happened primarily in post-processing now happens in real-time during capture.

Above: A video shot on a GoPro in 2013 shows some choppy bumps as the rider goes over the rough terrain.

Soaking up the chatter

Where you really notice the difference in the GoPro 7 Black’s performance are situations with lots of little bumps, or “chatter” as some shooters call it. Imagine riding a mountain bike over a rocky trail or a road bike over some lumpy cobblestones. That kind of quick, twitchy shaking is the bane of action camera footage, which is why GoPro has concentrated so heavily on it.

That’s the kind of chop that mechanical image stabilization devices like lenses with built-in stabilization or gimbals that hold the camera struggle with. “There’s an operational limit on mechanical stabilization,” says Gilmour, “and when you reach that limit, it will need to reset, which creates something jarring and unnatural.”

Using digital image stabilization, however, you can select a camera mode that crops the active area on the sensor down even more and give the cropped sensor more room to bounce around to smooth things out even more.

While there are certain aspects of a camera’s performance you can measure objectively, like sharpness and digital noise, other decisions are more subjective.

For instance, if the engineers building the HyperSmooth tech had tried to mimic the look of a mechanical gimbal, that sometimes creates what’s called a “false horizon,” where everything in the distance remains level, even if your body and the camera turn. This effect is what makes gimbals so effective for drones, but not ideal for action cameras. That takes some of the drama out of scenarios like leaning over in a turn on a motorcycle.

The line between just the right amount of smoothing and too much is also very thin. There were times in trying out the GoPro Hero 7 Black where the footage looked a little overly smooth, giving any motion a slightly floaty feel that isn’t necessarily representative of what I remember.

Still, when it comes to absorbing the small bumps that make older action camera footage unwatchable, the GoPro Hero 7 Black is truly impressive. Just beware: Without shaky footage, everyone will see just how slow the riding in your next mountain biking video really is.