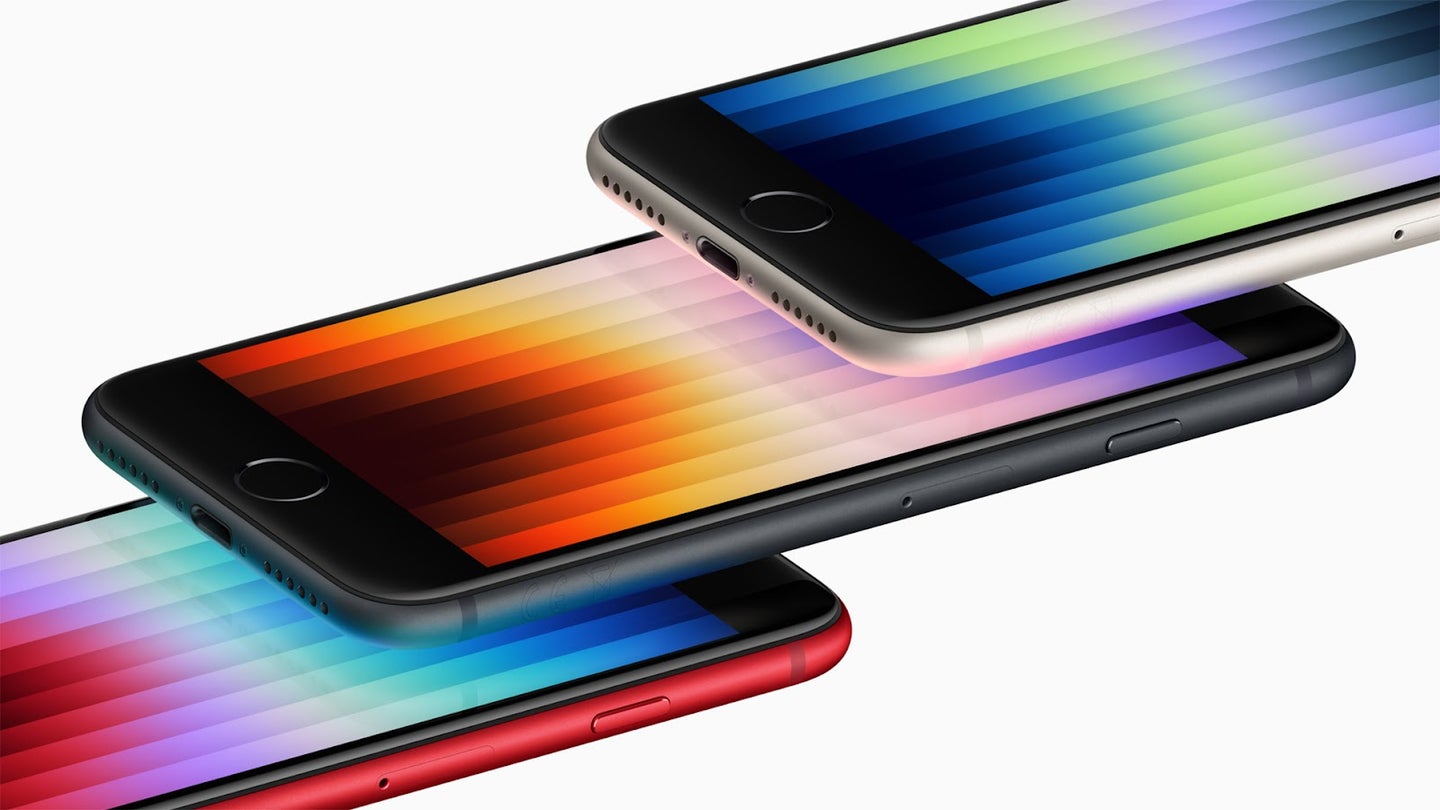 Late last year, Apple overhauled the top end of its smartphone lineup with four widely-lauded iPhone 13-series phones, earning rave reviews and more than a few sales in the process. But while these models have certainly proven popular, the cost and size of flagship phones may not be for everyone.

If you’ve used the earlier second-gen model, the latest iPhone SE variant is going to feel mighty familiar, as its physical design is nearly unchanged. It’s still based around a 4.7-inch display, which is the smallest and dimmest of any of the current iPhone models. Apple stuck with IPS LCD technology, as opposed to OLED, so it also lacks HDR support.

Yet despite its small screen, the phone itself is almost exactly halfway between the size of the iPhone 13 and 13 mini models. This gives it a rather retro feel, as do the chunky bezels, the lower of which plays host to a combined physical Home button and fingerprint reader.

The new iPhone SE sports the same hardware in its front- and rear-facing cameras as its predecessor.

The sole rear camera still captures 12-megapixel imagery from a wide-angle f/1.8 lens, while the front camera retains the same 7-megapixel resolution and f/2.2 aperture of the second-gen SE. There are more changes on the software front, though, which aim to make the most of the phone’s boosted performance courtesy of the updated chipset.

Compared to earlier versions, Smart HDR 4 is said to yield more attractive skin tones for up to four subjects at once, as well as improve both contrast and lighting. The third-gen Apple iPhone SE is also the first in its series to include Apple’s multi-shot Deep Fusion technology, which first landed in the iPhone 11-series in late 2019.

Deep Fusion works silently in the background, capturing a rolling buffer of varied exposures from the image sensor as soon as you open the camera app. When you hit the shutter button, the last nine of these frames—four standard exposures, four short exposures, and one longer one—are seamlessly combined to create a single output image with improved detail, reduced noise, greater dynamic range, and better color.

And the best news? Smart HDR 4 and Deep Fusion work with both the rear-facing and the front-facing cameras. In addition to these, the SE can now shoot high frame-rate 1080/120p video, for a slow-motion effect in Full HD.

Compared to the iPhone 13 cameras

Software improvements aside, the 3rd-gen iPhone SE’s camera hardware is still far less sophisticated than that of the iPhone 13 models. For one thing, there’s no optical zoom at all, as it lacks the ultra-wide cameras of all four phones, plus the telephoto camera of the Pro and Pro Max. Nor is there any sensor-shift image stabilization.

The SE’s rear camera is also noticeably less bright than those of higher-end models, while its front camera has a significantly lower-resolution sensor. The front camera lacks depth detection, too, meaning it can’t be used for Face ID. And the rear camera lacks the Pro and Pro Max’s LIDAR autofocus tech, and macro shooting capabilities.

The new SE also doesn’t support “Cinematic mode,” introduced with the iPhone 13-series, nor is there “Night mode“. You also won’t find options for ProRAW capture or Dolby Vision HDR. And digital zoom is limited to 5x, which is the same as the base iPhone 13 models, but much less than the 15x digital zoom offered on the iPhone 13 Pros.

The iPhone SE III uses a variant of Apple’s latest A15 system-on-chip (SoC), which Apple says should help improve battery life by up to 25% compared to its predecessor. This, along with the addition of a sub-6GHz 5G antenna, should make the phone feel a lot zippier than the previous version.

Storage options now top out at 256GB, which is twice as much as the previous generation. And support for alternative global positioning technologies has also been added. Like its predecessor, the new SE is IP67 rated for water resistance and supports wireless charging.