Panasonic's latest flagship Micro Four Thirds camera retains its predecessors' razor-sharp focus on video, and with lower-than-expected pricing, it's within reach of both content creators and smaller, lower-budget productions. 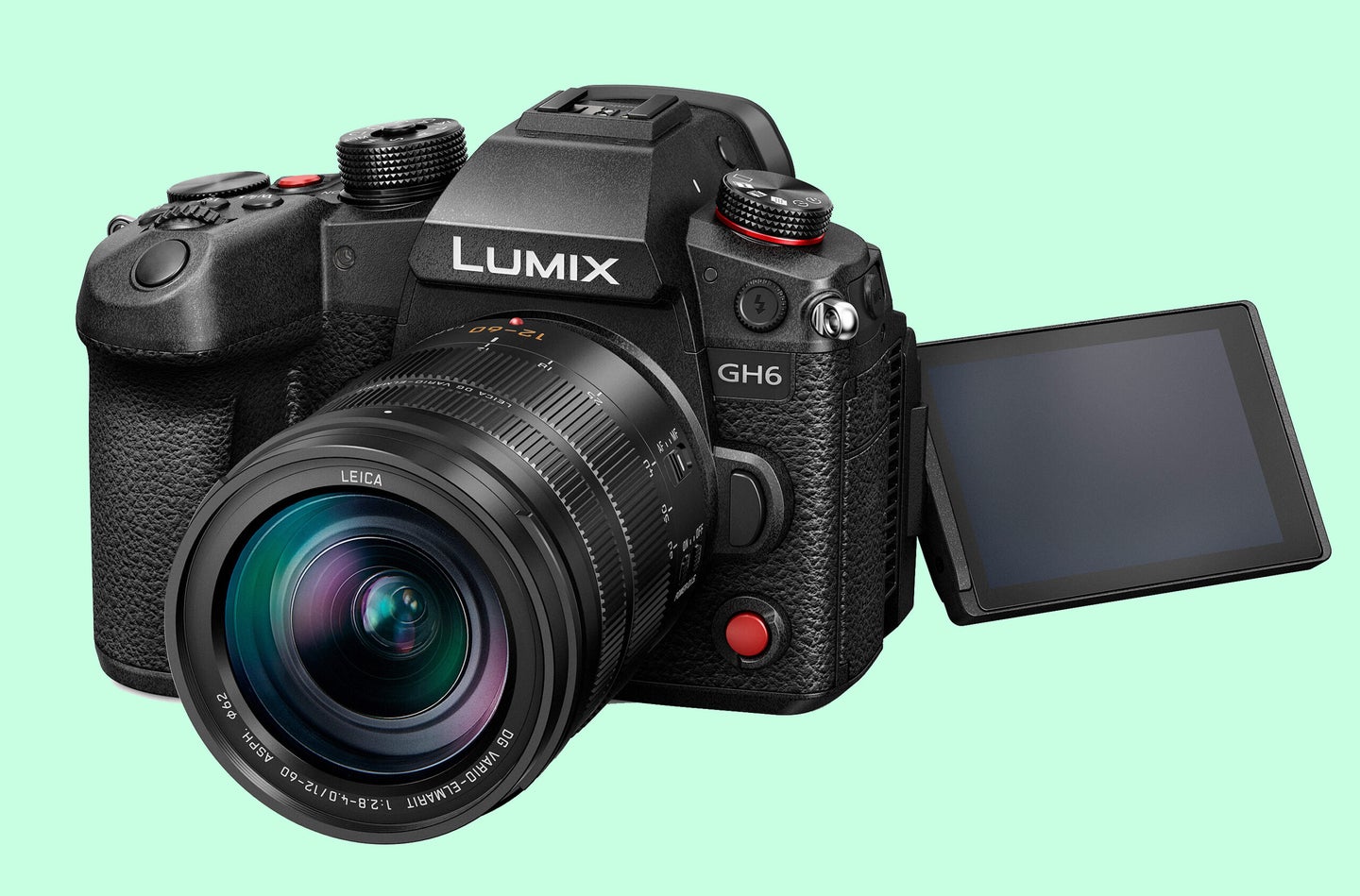 The GH6 is the first Micro Four Thirds camera to break the 20MP barrier. Panasonic
SHARE

Back in May 2021, Panasonic revealed that it was developing a new flagship model for its Micro Four Thirds mirrorless camera line. Originally slated to ship by the end of 2021, the Panasonic GH6’s debut was later delayed to early 2022. If you’ve been waiting with bated breath for it to appear ever since, prepare to feel the sweet rush of oxygen to your lungs once more. Your wait is finally nearing its end because in a few short weeks the Lumix GH6 will finally hit the market.

Last year’s announcement promised that the GH6 would be a highly portable, video-centric Lumix G-series flagship designed to take the reins from Panasonic’s extremely popular GH5 series. The company also pledged that it would deliver this new camera at a price tag of around $2,500. With a body-only price of under $2,200 and some very impressive specs, the GH6 looks not only to have delivered everything it promised… but for even less cash than we were expecting. Given the supply chain issues and inflationary woes the world has been faced with of late, that’s got to be commended.

The Panasonic Lumix GH6 has the solid build we’ve come to expect of the GH-series and its looks are quite familiar too. Its splash, dust, and freeze-resistant body features magnesium alloy panels front and rear, and sports two new dedicated controls. These are a new audio info button on the top deck, and a sub-video record button on the front panel. The design has also gained tally lamps both front and rear, the joystick is now eight-way instead of four-way, and the flash sync terminal now doubles as an input/output terminal for timecode.

On the inside, the changes are more immediately apparent. The entire imaging pipeline has been overhauled, and one of the earlier camera’s SD card slots has been switched out for CFexpress. But more significantly, there’s now an entirely new, active cooling system designed to bring an end to recording time limits—even those caused by the camera’s own internal temperature. Thermal pads and graphite sheets gather heat output by the sensor, image processor, and CFexpress card slot and then deliver it to a new internal heat sink. In turn, a fan actively draws air into the camera, passes it through the heat sink’s radiator fins, and then returns the warmed air to the environment through a grille on the camera’s left side.

Yet despite all of these changes, the Panasonic GH6’s width and height are basically unchanged from its predecessor, although it is now a little deeper and heavier. Body depth has increased by about 0.5 inches, and body-only weight by 3.4 ounces.

Performance when using the mechanical shutter has increased by two frames per second, up to 14 fps if focus is locked from the first frame. But when using continuous autofocus the burst rate has actually fallen by one frame to just 8 fps. With an electronic shutter, though, the continuous AF burst speed is unchanged from the GH5 II at 7 fps. Lock focus and you’ll now manage a whopping 75 fps with the electronic shutter, up from just 11 frames in the earlier camera.

With a total of 315 points and updated algorithms, the GH6’s AF system—which still pairs its unique Depth from Defocus tech with contrast detection—is a good bit more complex than the 225-point AF systems of its predecessors. Yet despite the extra work to be done, AF processing performance is said to have tripled and autofocus now works even during high frame-rate video capture up to 200 fps. (Some 16 lens models will support this capability at launch.)

The 25.2-megapixel sensor around which the GH6 is based should, on paper, give around an 11% increase in linear resolution over the 20.3-megapixel sensor shared by its predecessors. Its output is handled by an updated Venus Engine image processor with twice the performance, which is said to improve still/video noise reduction as well as detail and color.

As well as its native 25.2-megapixel stills, the Panasonic GH6 also offers a resolution-boosting eight-shot stacked mode. This can work handheld thanks to an uprated 7.5-stop in-body stabilization system, and yields a final output resolution of 100 megapixels. (Wondering how that IS system compares? The GH5 II had 6.5-stop IS, and the GH5 just five stops.)

While it’s certainly a capable stills camera, video is the GH6’s bread and butter. It can now shoot unlimited 60 fps, 10-bit, 4:2:2 video at Cinema 4K (4096×2160) resolution, and also allows 5.7K capture at the same speed and bit depth. High frame-rate fans will find support for 120 fps shooting in 4K or up to 300 fps in Full HD. And sound recording is uprated too, with the built-in mics capable of 24-bit, 48KHz audio, and external mics allowing up to 96KHz.

The GH6 can also shoot 13-stop HDR video in-camera thanks to a new Dynamic Range Boost mode. This comes hand-in-hand with a base sensitivity of ISO 800, or ISO 2000 for V-Log or HLG. (Incidentally, V-Log capture replaces V-LogL from the earlier cameras, and should allow for more detail in highlights and shadows.)

It’s possible to record video internally and output it to an external device at the same time. A future firmware update will also add both USB Host capability to allow recording directly to an SSD, as well as Apple ProRes RAW support which will also allow for four-channel audio capture with an optional XLR adapter.

The Panasonic GH6 draws power from the same 2,200mAh batteries as the GH5 II, but battery life has fallen by around 7% to 380 frames on a charge. The good news is that the USB-C 3.2 Gen 2 port now supports both charging and operation via USB power delivery as well as USB tethering.

Images are stored on dual card slots, with a choice of either an 800Mbps+ CFexpress Type B slot or a sub-600Mbps UHS-II U3 V90 SD card slot. There’s also a Type A HDMI port, as well as both Wi-Fi 5 (aka 802.11a/b/g/n/ac) and Bluetooth 5 (aka Bluetooth Low Energy) for wireless transfer and remote control.

With the Lumix GH6, Panasonic is targeting both individual content creators looking to differentiate themselves with their videos, as well as smaller, lower-budget teams shooting documentaries and short films. If video is your focus and you’re not already wed to another platform, it’s definitely worth a look!