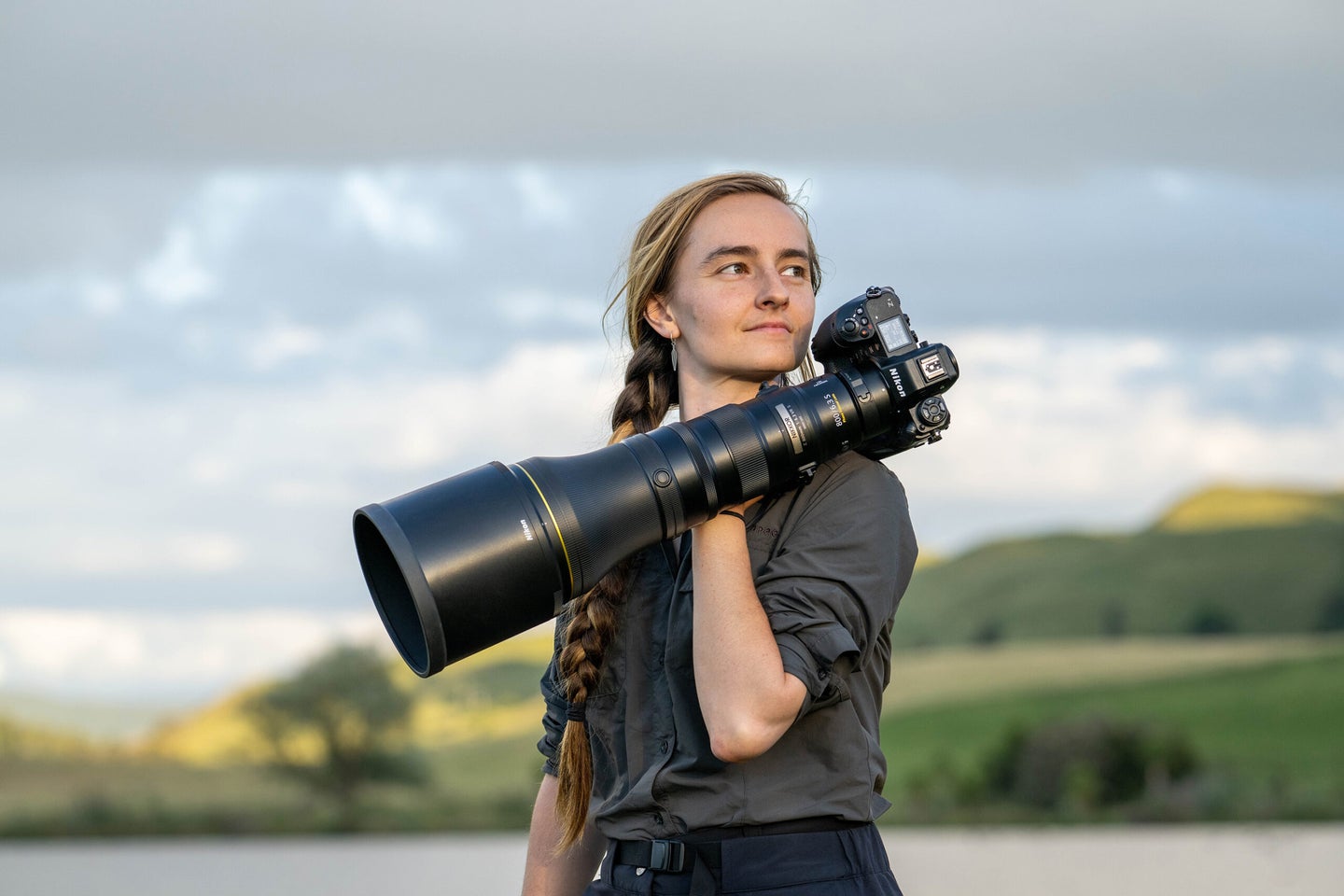 With only a few gaps over the years—most notably from 2005 to 2013—Nikon has nearly always included a powerful 800mm telephoto lens in its lineup, going all the way back to the mid-1960s. Yet for its fledgling mirrorless Z-mount, the lens selection has until now been curtailed at the 400mm mark, at least without having to resort to teleconverters.

Today, that changes with the introduction of the farthest-reaching Z-mount lens to date, the Nikkor Z 800mm f/6.3 VR S. The lens’ trim proportions, lightweight design, and overall affordability (for a super-tele at least) are likely to make it a really popular choice if you need to bring distant subjects right up close.

Like the F-mount lens before it, the Nikkor Z 800mm f/6.3 VR S is largely aimed at several distinct markets: Birding, wildlife, nature, sports, and aviation. It may also appeal to photojournalists and documentary photographers.

If you need a telephoto lens this powerful on Z mount, there is simply no direct alternative. The nearest native option is the already-heavier, far more expensive NIKKOR Z 400mm f/2.8 TC VR S ($14,000) paired with the Z Teleconverter TC-2.0x. Otherwise, you’ve been limited to adapting an optic from another mount until now.

Only deep-pocketed enthusiasts or pros need apply—if you have to ask the price, you probably don’t need it. But given this lens’ reach and portability, we think Nikon is going to sell a lot of these.

Nikon’s most recent DSLR equivalent lens is a 10.1-pound beast that requires a sturdy tripod, the Nikon 800mm f/5.6 . The Nikkor Z 800mm f/6.3 on the other hand is designed to be shootable with just a monopod or even when entirely handheld. Tipping the scales at just 5.3 pounds, it’s barely more than half the weight of the earlier SLR optic.

That’s a full 1.2 pounds less than the Z-mount 400mm f/2.8 alone, and 1.8 pounds less than that lens with the optional 2x teleconverter attached. In fairness though, that combination would also yield a slightly brighter f/5.6 maximum aperture, as would have the decade-old DSLR lens.

Shot by itself in DX crop mode for an APS-C sensor size, meanwhile, the 35mm equivalent focal length would be 1200mm standalone, doubling to 2400mm with a 2x teleconverter as well.

With dimensions of 15.2-inches in length and 5.6-inches in diameter, the 800mm f/6.3 is very close to the same length as the 400mm f/2.8, but about 0.6-inches slimmer. Nikon has included all of the gaskets and seals you’d expect to repel dust, dirt, and moisture, and the magnesium-alloy barrel has been designed to keep the center of gravity as close as possible to the camera body, allowing quicker acceleration for smoother panning.

As well as a manual focus ring, the Z 800mm f/6.3 is absolutely packed with external controls. These include a customizable L-Fn button on the side of the barrel near the lens mount, and four buttons spaced at 90-degree intervals near the front of the lens that serve as customizable L-Fn2 buttons.

There are also focus mode and limiter switches alongside the L-Fn button. A clickless control ring in front of the focus ring, meanwhile, can control aperture, ISO sensitivity or exposure compensation.

Finally, a memory set button on the right of the barrel can be used to quickly recall saved focus distances. At launch, this will work with only the Nikon Z6 II, Z7 II, and Z9 bodies, but support for more models is planned via future firmware updates.

Not surprisingly, to achieve the Z 800mm f/6.3’s unusually compact and lightweight design Nikon had to resort to quite an exotic optical formula. In all, there are a whopping 22 elements in 14 groups, and five of these are worthy of particular note.

A nine-bladed, rounded iris allows for apertures from f/6.3 to f/32. Nikon has also included an optical vibration reduction system which can provide a 5.0-stop corrective strength to CIPA testing standards. If used with the Nikon Z9, Synchro VR can boost this to a 5.5-stop correction.

Up front, the company’s fluorine coating repels oil smudges, dust, and moisture from the front lens element, while its Nano Crystal Coating is used to prevent reflections and cross-lighting. Filter fans will be pleased to see support for 46mm drop-in filters included.

The 800mm f/6.3 has an internal-focusing design that can focus to a minimum distance of 16.41 feet. Amongst the lens’ marketing materials, one last spec stood out to us as a bit of a surprise. While most modern telephoto lenses rely on one or more linear motor to drive AF, Nikon has instead opted for a stepper motor-based autofocus drive in the 800mm f/6.3.

This suggests the company has been able to minimize the overall mass of the focusing group such that it feels sufficient performance can be derived from a less expensive stepper motor. In turn, this has perhaps helped to enable the lens’ aggressive pricing.