Canon wants you to step up your virtual reality game with this new $1999 twin fisheye lens for the brand's RF-mount mirrorless cameras. 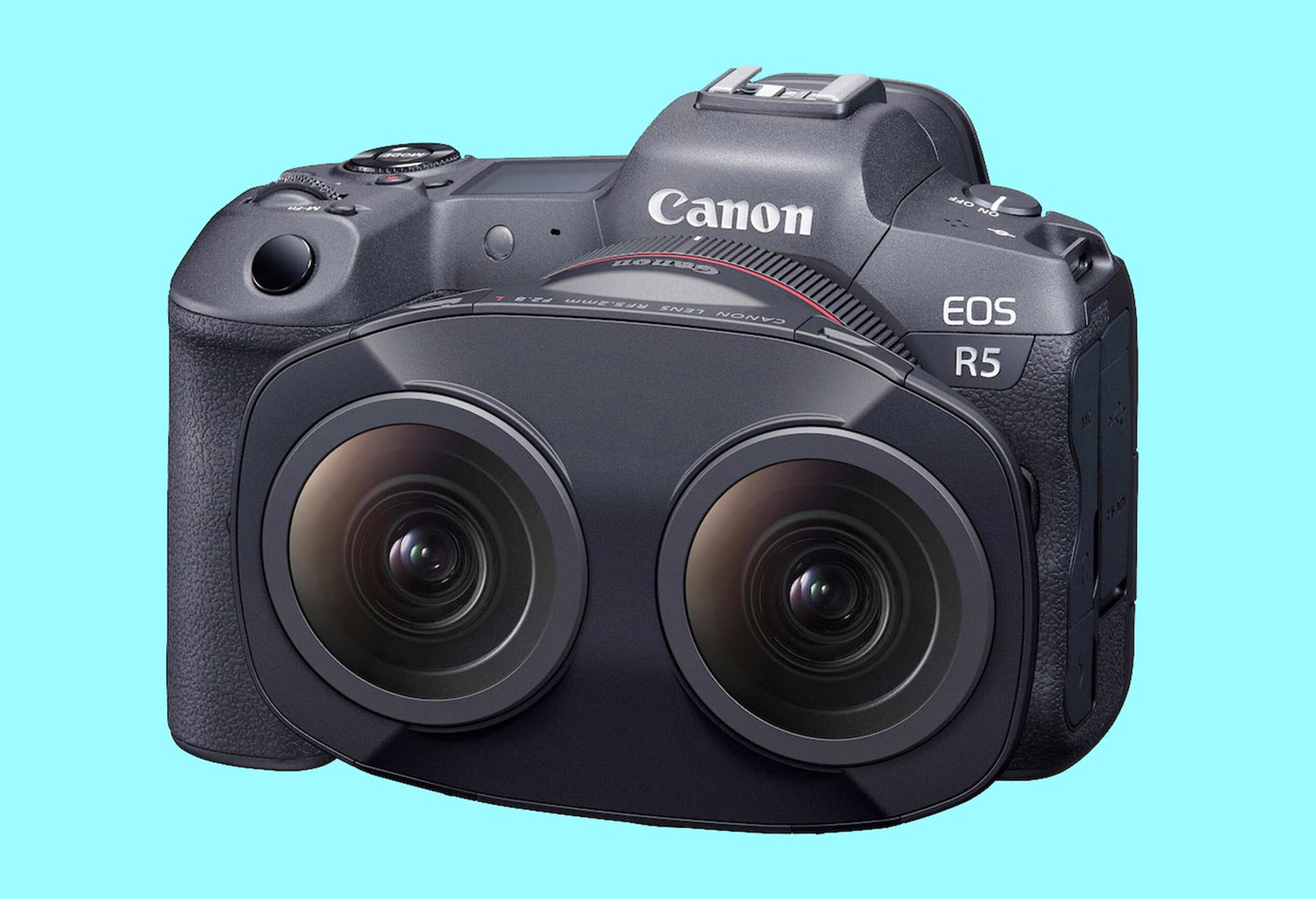 Canon has just announced what might be its strangest lens ever: the RF 5.2mm f/2.8 L Dual Fisheye lens. Yes, that’s right—it’s two fisheye lenses strapped together in one lens body.

The Dual Fisheye is designed to shoot stereoscopic 3D 180º virtual reality footage onto a single camera sensor. It’s the first lens in Canon’s EOS VR System, though we can presumably expect more down the line. It will retail for $1,999 when it goes on sale in December. Here’s what you need to know.

The RF 5.2mm f/2.8 L Dual Fisheye lens has two identical 5.2mm fisheye lenses side-by-side with a 60mm “interpupillary distance” (the distance between the center of the two lenses). There’s a lot of glass involved: each side has 12 elements in 10 groups including two Ultra-low Dispersion (UD) elements and two prisms to “fold” light to hit the sensor.

While both lenses have their own optical systems, their aperture (from f/2.8 to f/16) is controlled and coordinated using what Canon calls the “Dual-synchronized Electromagnetic Diaphragm (EMD)”. This means the aperture and exposure are always synchronized. This makes combining the footage much easier later on.

Similarly, both manual focus lenses are controlled using the one focus ring. You can adjust the left-right focus distance with an included hex wrench if you need to. But otherwise, both lenses will always focus to the exact same distance.

For two L-series lenses MacGyvered together, the Dual Fisheye is surprisingly light and compact. It’s 4.8-inches wide, 3.3-inches tall, and just 2.1-inches long. It weighs around 12.4 ounces. Really, it’s only the lens’ odd shape that will make it hard to fit in a camera bag.

The Dual Fisheye has one purpose: to shoot VR footage. Canon claims it’s the “world’s first digital interchangeable lens that can capture stereoscopic 3D 180° VR imagery to a single image sensor.” The idea, supposedly, is that “creators can go from traditional stills or video shooting to stereoscopic 3D capture with a simple lens swap.” Assuming it all pans out as claimed, the Dual Fisheye will make it easier and more accessible for many people to shoot 180º VR footage.

To that end, most details about the Dual Fisheye have been carefully considered. The interpupillary distance and focal length of the fisheyes were deliberately chosen to closely mimic normal human vision with a “natural parallax”. There’s “Subwavelength Structure Coating (SWC)” on the lens to minimize ghosting, flare, and reflections and keep the color balance consistent between both lenses in tricky lighting situations. It’s also compatible with gel ND filters so you don’t have to stop down in bright light.

The R5 has gained a number of features to make capturing VR video simpler. It automatically adds the metadata necessary to convert the fisheye footage into equirectangular footage and has a “Magic Window” on-screen overlay that shows an approximation of the VR field-of-view to make composition easier. You can also magnify to 6x and 15x, use MF Peaking, and swap between lens previews to nail your focus.

To pull everything together, you also need software. Canon is working on two subscription offerings: its own EOS VR Utility and the EOS VR Plug-In for Adobe Premiere Pro. Availability and pricing have yet to be announced.