These new portable strobes don't have TTL, but bring lots of upgrades 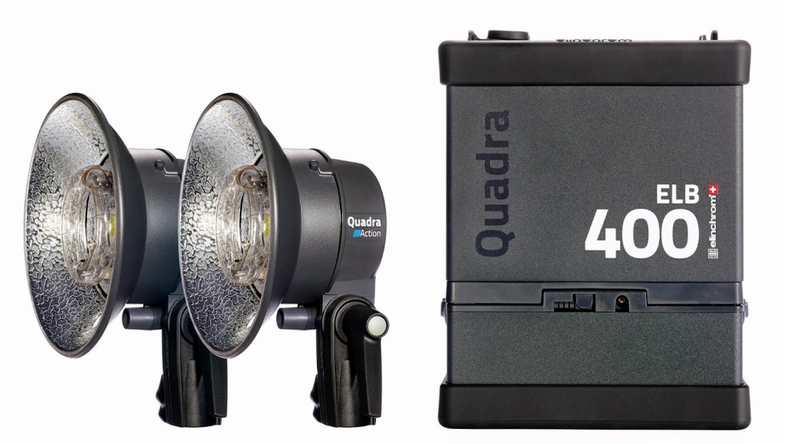 For quite some time, the Elinchrom Ranger kit has been a very popular option for photographers looking for more powerful lights when shooting on location. Now, they have a new portable light kit called the ELB 400, which puts out a total of 424 watts from a single pack to a pair of heads.

Battery-powered strobes are currently all the rage, with both Phottix and Profoto making recent announcements in the space. The new ELB 400s don’t have built-in TTL like some of the other new products, but the system has received some substantial upgrades. It can get 350 pops on a single full charge and the recycle time has been cut down by a half-second at full-power as well.

There are two options in terms of heads that will work with the ELB pack. The Action heads are built to have a shorter flash duration, which makes it easier to freeze fast-moving subjects. At full-power, the duration is just 1/2800, which should be sufficient for freezing athletes and other swift-moving objects without the unattractive ghosting strobes sometimes give. The other option is the Pro head which offers Hypersync.

The pack also now has a display on top, which makes the whole thing feel a lot more modern. It provides pertinent information about settings, remaining battery power, and shooting modes.

You’ll be able to buy four different kits, depending on whether you want one head or a pair and if you choose the Action or Pro heads. Like the rest of the products in this category, they won’t be cheap, so don’t expect them to come in at speed light pricing. But, they do give you a lot more flexibility in the field where you might need tons of power.

We’re interested to give these lights a shot and seeing how they compare to the other new competitors in the segment.