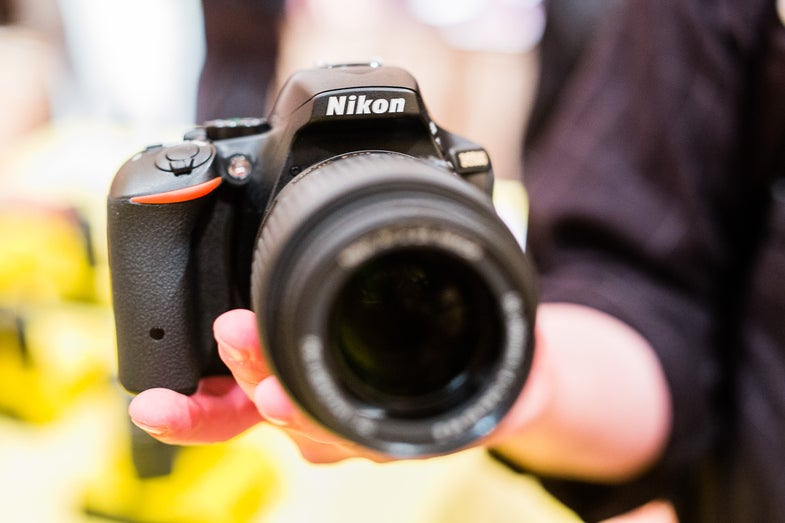 One of the few new traditional cameras announced at the show was Nikon's mid-level D5500. It's their first DSLR with a rotation touch screen and it's also extremely small and light. They also have a new version of the 55-200mm lens to go with it. Stan Horaczek
SHARE

There aren’t a ton of new cameras being announced here at CES 2015, but Nikon’s petite new D5500 is making its first appearance and it has brought a few new lenses with it.

I picked put he D5500 last night and I was impressed with how light it is (It’s well under a pound). It honestly feels like a mirrorless camera. Inside, it has all the stuff you’d expect from a Nikon DSLR at this level. it has a 24.2-megapixel APS-C sensor without an optical low-pass filter. It’s coupled with their XPEED 4 image processor, so you can push it up to ISO 25,600.

The back of the camera has a 1.037k dot, 3.2-inch vari-angle LCD screen that freely rotates and it’s actually touch sensitive, which is a first for Nikon DSLRs. The D5500 also has built-in Wifi rather than relying on the adapter, which is something Nikon is doing more and more. It’s certainly a step in the right direction.

Because it’s an entry- to mid-level camera, it has a variety of scene modes that affect the picture, but it also has some features more advanced users can appreciate like 1080p video as 60 fps with full-time autofocus performance.

To go along with their new DX format DSLR, Nikon also has a few lenses specifically for crop sensor cameras. The new AF-S DX 55-200mm F/4.5-5.6G ED VR II is meant to be a companion lens to the 18-55mm kit lens and has three stops of image stabilization as well as an ultrasonic motor to make it smooth and quiet. It will also be available in February for $349.

The bigger story on the lens front is the new AF-S Nikkor 300mm F/4E PF ED VR lens, which they’re claiming is the world’s lightest 300mm full-frame, fixed-focal length AF lens. It uses Phase Fresnel optical tech to get the size down and to combat distortion and other undesirable lens side effects. It has the more advanced VR, offering 4.5 stops of image stabilization, as well as electromagnetic aperture control and ED glass.

At $1,999, it’s still aimed at the higher-end enthusiasts, but for a lens this small and light, it could be a killer travel or even a sports lens.

To check out more of the new stuff hitting at CES 2015, follow along with our tag page.