Carry your gear in style this year 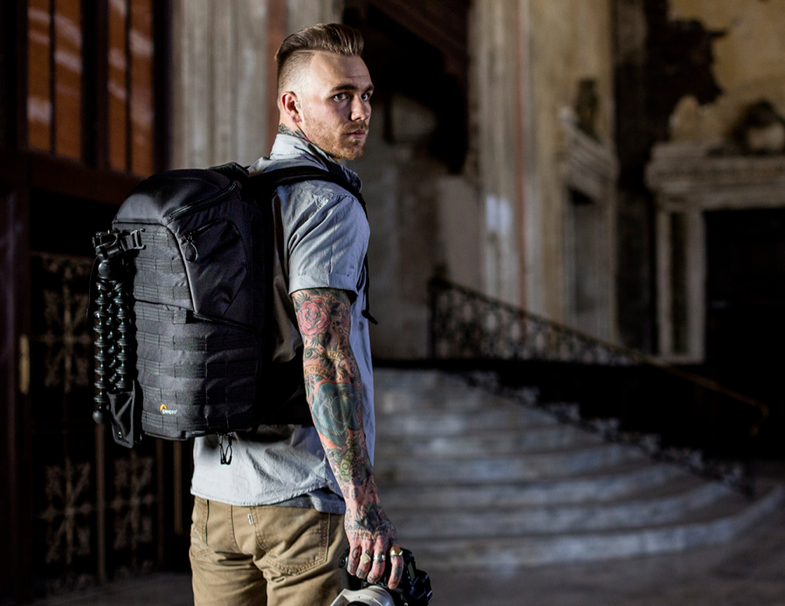 Photographers aren’t renowned for being the most fashionable creatures. We’re great at capturing beauty, but we’ve also been known to lug around the same, worn camera bags for years–sometimes decades–at a time. But, the number of new camera bags hitting the market this year is truly impressive, so we thought we would round up a collection of the most notable new bags you may want to ask Santa for this year.

The selection runs the gamut from small, simple shoulder bags to huge rolling cases that are capable of dragging along most of the essentials you’d find in a full-on photo studio. There has never been a time when camera gear was as diverse as it is right now and that has led to all kinds of interesting bags that dont’ follow the standard sack with straps formula. 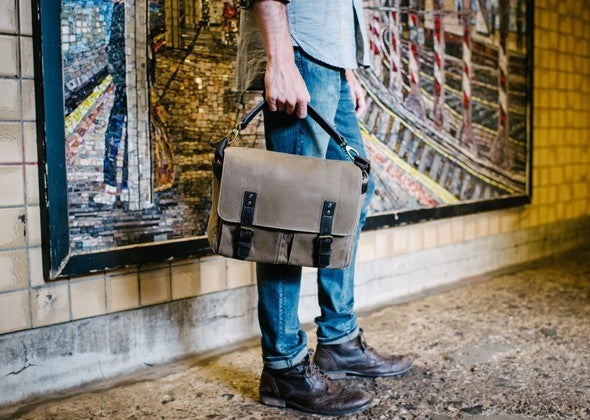 When it comes to style, Ona has a reputation for making some of the best-looking urban camera bags around, and the Prince Street follows that tradition. It comes in either waxed canvas or leather, both of which are built to be tough, but also to show wear in a way that makes them look even better than when they were new. It’s not meant to carry all your gear. There’s room inside for a DSLR body and a couple lenses or accessories, but as cameras shrink thanks to the rise of compact system cameras, smaller bags get more appealing, even for serious and pro shooters. Official Site 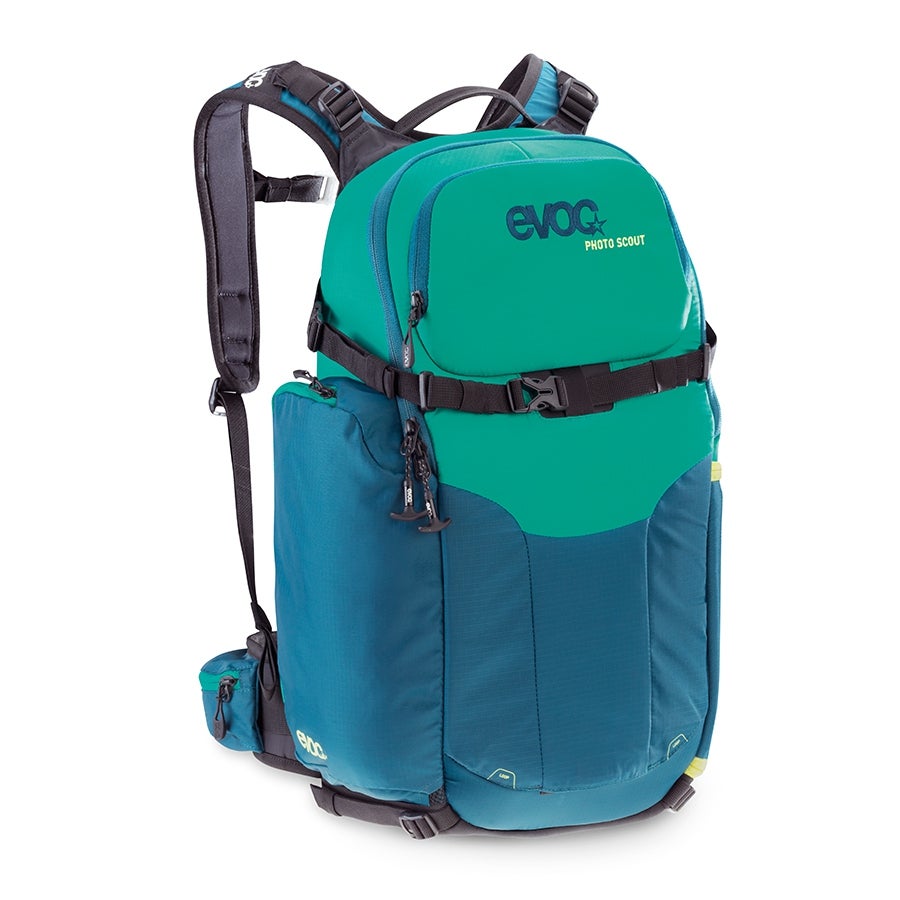 You may not be familiar with Evoc as a camera bag maker, but that’s because they have their roots in the winter sports and mountain biking world. But, they have taken that adventure experience and brought it into the camera bag world. The brightly-colored Photo Scout is meant to be worn for a day out doing some adventure shooting. It uses a clever and very effective harness system to make the bag seem lighter than it is, which is greatly appreciated when you’re hiking miles through tough terrain. There’s room for camera gear as well as other supplies you may need when you’re out. And if you’re not a fan of the super bright colors, they do offer a black version, but the added visibility of the bright version could come in handy if you’re taking it into the woods. Official Site 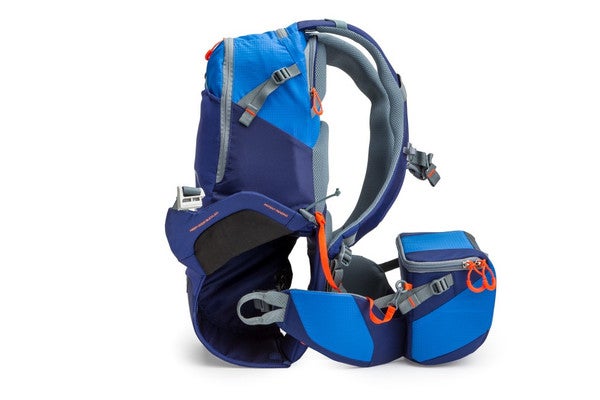 Fanny packs have never been the height of style, but they sure are useful. The Rotation 180 integrates a waste pack into its revolving design so you can have easy access when you need it and stow it when you don’t. There’s room enough in the daypack for all the trail essential like a light jacket and snacks, while the camera stuff lives in the lower part of the bag. If you want to wear the belt pack on its own, you can do that as well. The idea is to never have to take your backpack off during a hike and that sounds just fine to us. Official Site 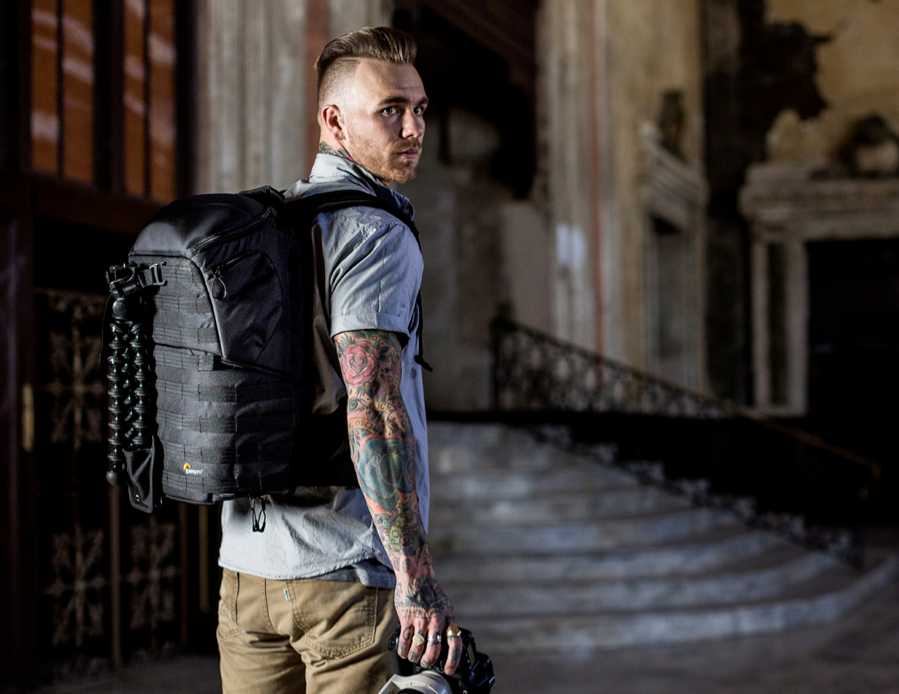 On the outside, the ProTactic bags look like something you’d see in a military bag. There are no loud colors or fancy accents. The outer shell is made from extremely tough material that’s meant to take a beating, resisting things like tears and scrapes. The harness system is designed to keep the bag snug to your back as you move around, even if you’re running or jumping. There are several options for accessing gear, as well as a small, but well-thought-out selection of pockets to keep everything in check. Official Site 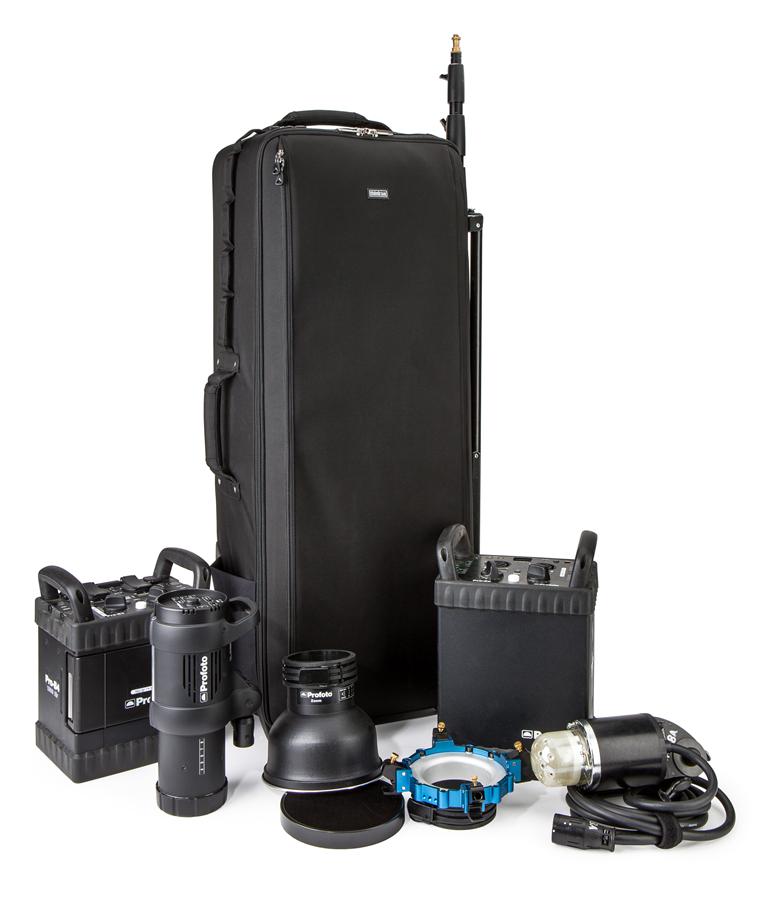 Sometimes you need to bring the whole studio with you and this is the kind of case you want under those circumstances. Think Tank’s Production Manager 40 is a rolling bag with more than enough room to fit pro-grade strobe lighting systems and even more than that. Because it will usually be filled with extremely expensive gear, the bag has an integrated locking system to help keep its contents safe. You can attach light stands and tripods to the outside of the case using included straps, giving it even more capacity for carrying stuff. Official Site 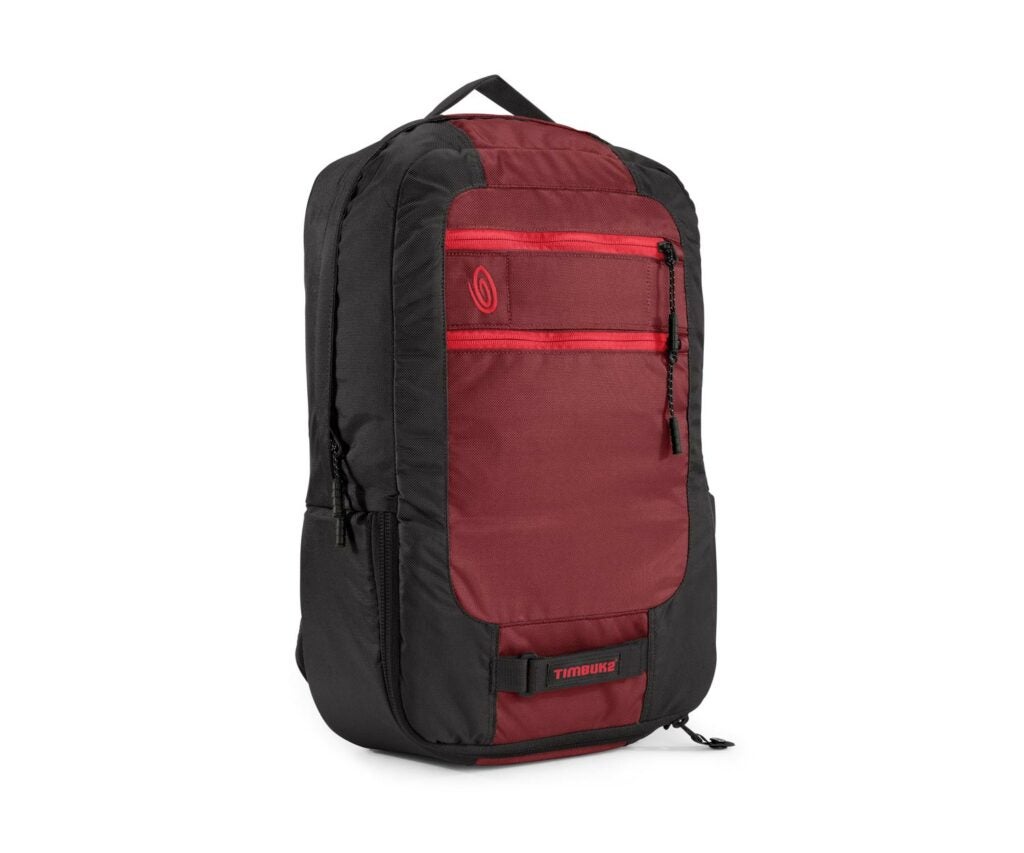 Having a camera on you at all times is important, but lugging one around all the time can be a pain, which is why Timbuk2 built this slimline daypack meant to hold a body and everything else you need for the rest of the day, even if you’re not going out specifically to shoot. The top compartment is meant for your non-camera stuff and there’s a full-sized laptop levee along the back of the bag. The bottom compartment flaps open and has enough room for a DSLR and 3 or four lenses or accessories. There’s even a new color for this year, which is a slick-looking dark red. Official Site 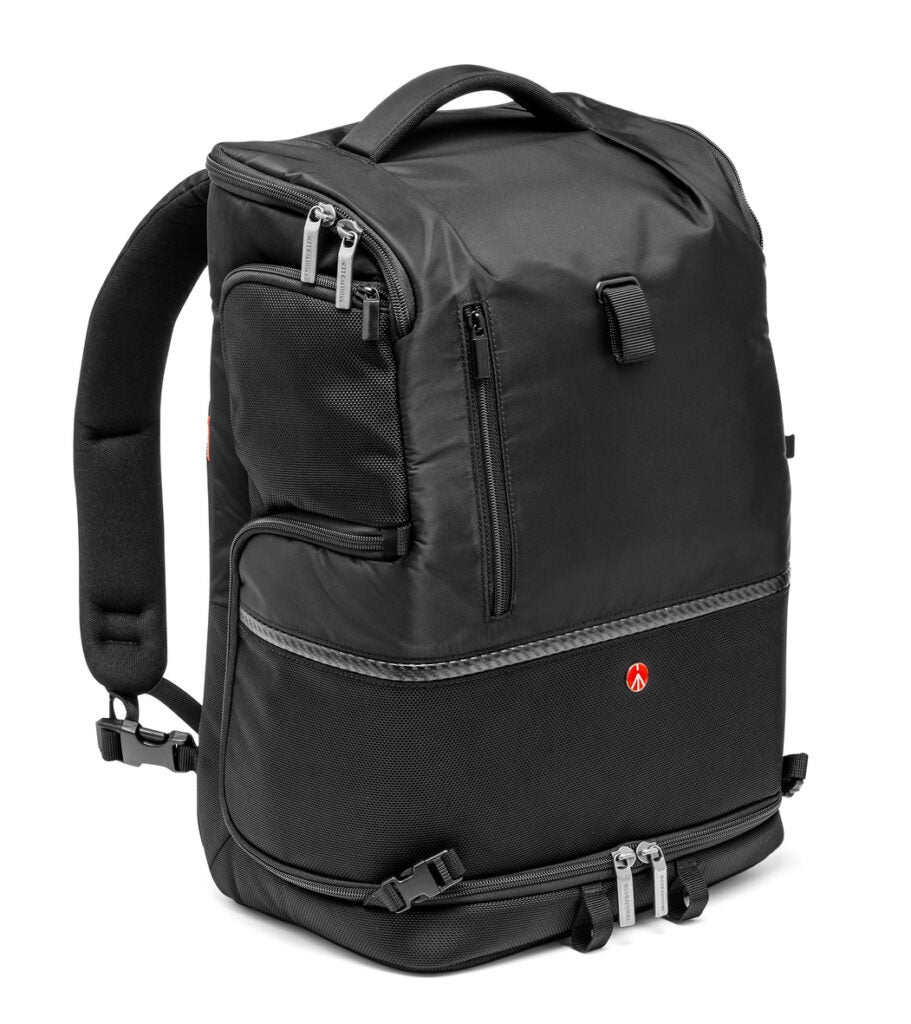 You’ll find a lot of arguments on the web about the best method for carrying a camera bag. Some people like backpacks while others prefer slings. This customizable bag offers both options. The straps can be adjusted to work like a typical backpack, but you can also unhook them and wear it over a single shoulder for quicker access to the gear inside. The compartments have been laid out so that they’re secure, but they’re also very easy to reach if you’re wearing the bag over one shoulder, which could mean the difference between getting the shot and missing the moment. The Advanced line as a whole has embraced the all-black design, which helps make it look less appealing to thieves. Official Site 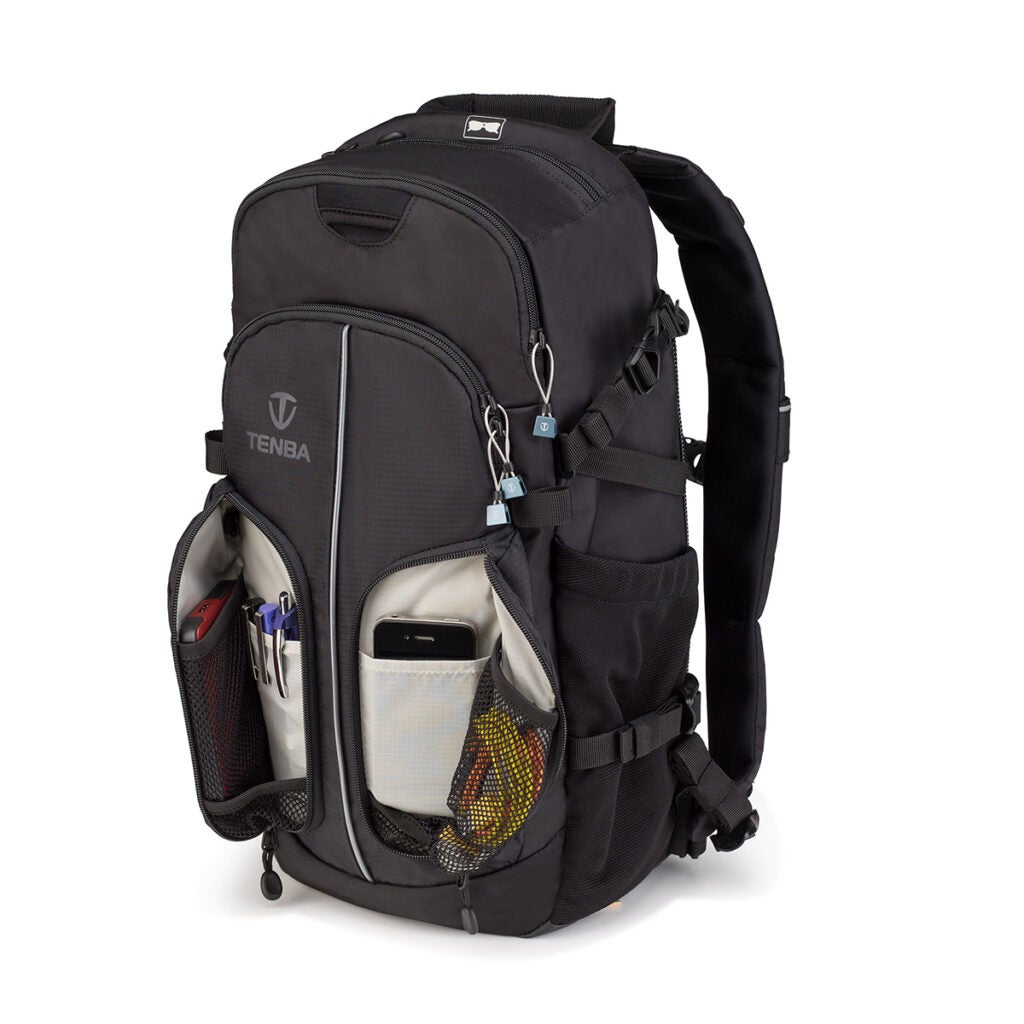 Action cameras like the GoPro are becoming an increasingly important part of many photography and videography kits. This bag is specifically designed to hold a collection of GoPro cameras and then organize the massive number of accessories that go with them. There are spot for spare batteries and all the different mounts, as well as a built-in wallet for extra memory cards. You can stick a table in the front of the bag as well as a hydration pack because often you’re using GoPros in a place where there aren’t many convenience stores. Despite holding a huge number of action cameras, it’s still pleasantly small and could even be used in concert with a more traditional camera bag without making you feel like a pack mule. Official Site 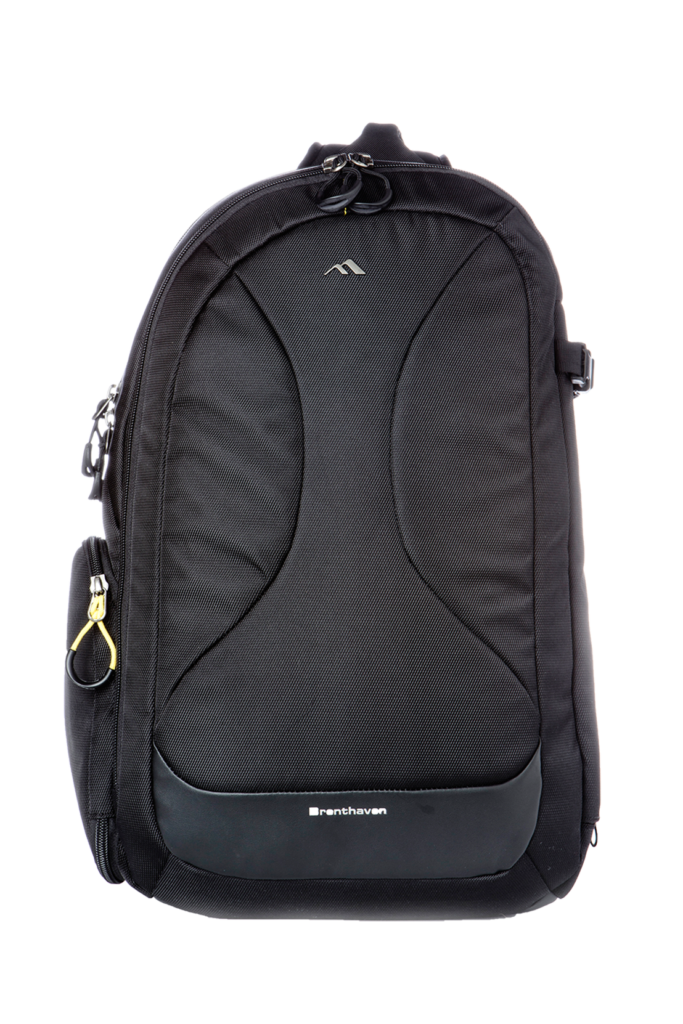 Lots of bags lately have been offering the option to be worn as a sling, but this is a dedicated sling for those who know what they want. It uses Brenthaven’s latest foam system and fits a pro DSLR body with a lens attached as well as extra lenses and accessories. It can fit up to a 13-inch laptop as well as an iPad, so it has everything you’d need for a day of shooting. Official Site 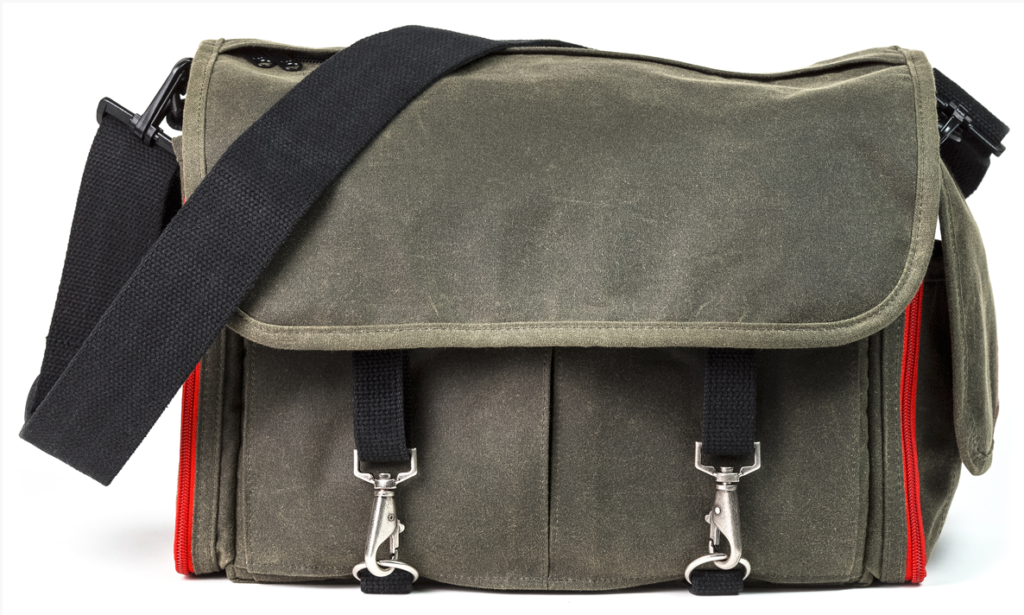 The soft-sided shoulder bags from Domke are about as iconic as camera bags come. The Next Generation line adds a few pops of bright color to the typically toned-down bags, but maintains the toughness for which Domke is typically known. There’s a double zipper along the top for quick access to the gear inside and much of the design comes from feedback given by working pros who are already using the Domke bags. It’s tall enough to hold an upright 70-200mm lens and a flash and there’s even a pocket specifically for tablets in the front of the bag. Official Site 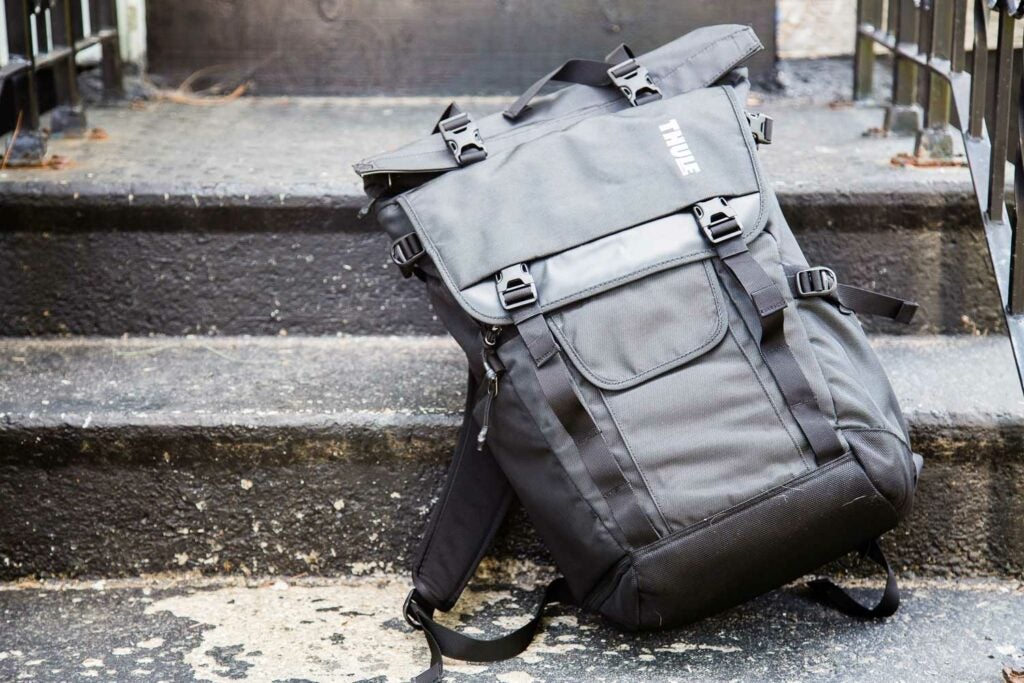 Many people try to find the smallest camera bag they can manage, but others prefer something with lots of room and this is the daypack for the latter group. There’s room enough in the bottom compartment for a DSLR with an attached lens and a couple more accessories. But, the top compartment has a ton of space for everything else you could possibly want to carry. There’s a full-sized laptop compartment with a specialized tablet pocket built right in. There are also tons more clever pockets arranged around the bag, making this one of the most spacious daypacks we have ever seen. Official Site 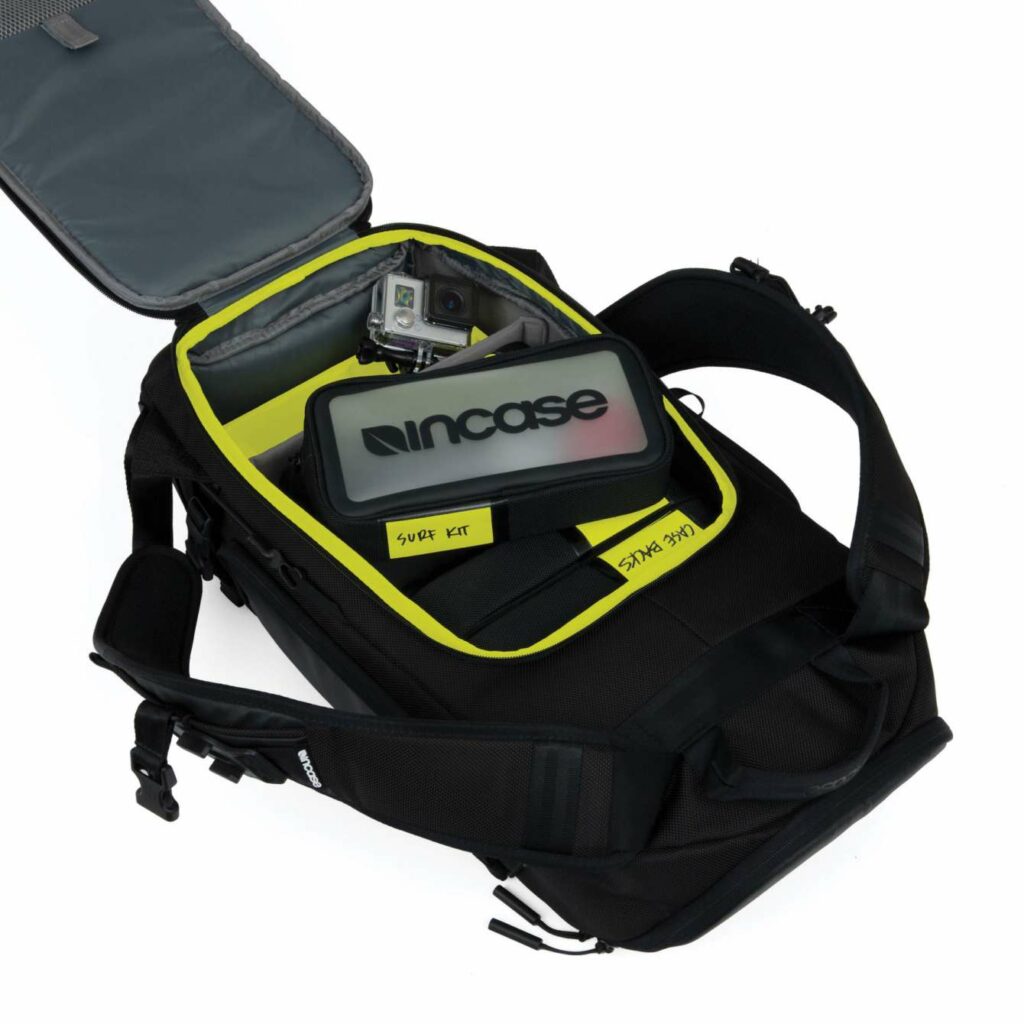 The folks at Incase have created a whole line of accessories and bags made specifically to handle all of the GoPro cameras people are toting. Their action camera bag uses a collection of individual pouches, each of which can be labeled to indicate what’s inside. The bag itself zips all the way down the back so you can have access to all of your stuff and the front is almost completely plain so id doesn’t have things to get caught on branches or rocks. It’s also very unassuming, so it’s less appealing to those who might want to swipe your gear. Official Site 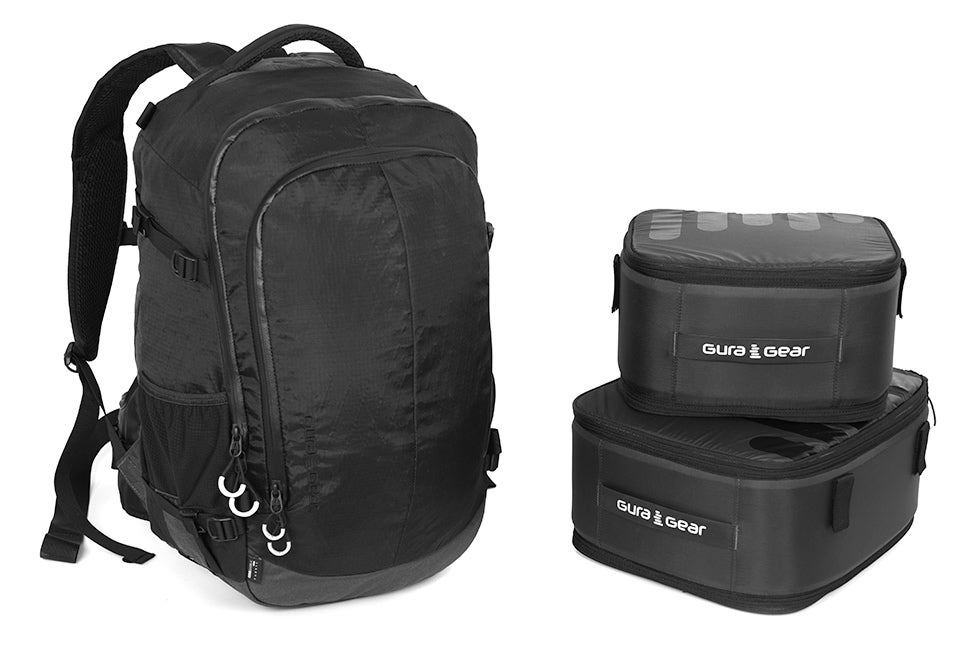 There are two separate compartments in the latest Gura Gear bag, each of which can be fit with a removable, padded gear holder. The top section holds multiple camera bodies and lenses, while the bottom is meant to hold a single body and lens/accessory. You can remove the gear pouch from either side and then use the bag as a daypack, with lots of room for carrying extra non-camera-related supplies. It’s built tough and has add-on options for hydration pouches as well, so it’s ready for any kind of fall/winter adventure you might want to throw at it. Official Site 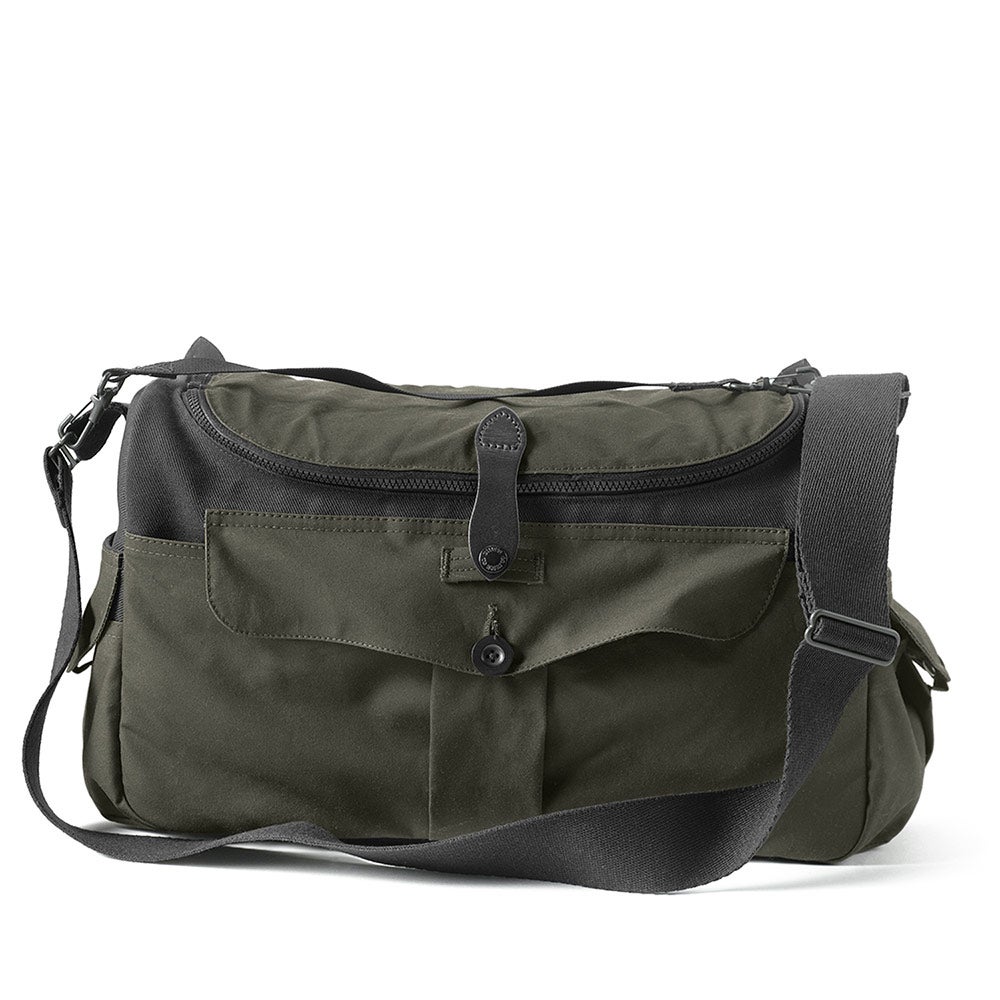 The name Steve McCurry should be a familiar one. He’s an iconic documentary photographer responsible for several important pictures, including the National Geographic “Afghan Girl” cover. He teamed up with Filson to make a very swanky camera bag meant to accommodate the gear typically associated with documentary photography. It’s not at all flashy, but it has an 8-slot interior divider as well as internal and external pouches to accommodate all the accessories you’ll need when you’re out shooting. It’s made from tempered-finish cotton with rugged twill trim and bridle leather accents, making it every bit as fancy as it sounds. Official Site
Stan Horaczek