Nikon Warns About The Dangers of Counterfeit Batteries

Could you spot a fake? 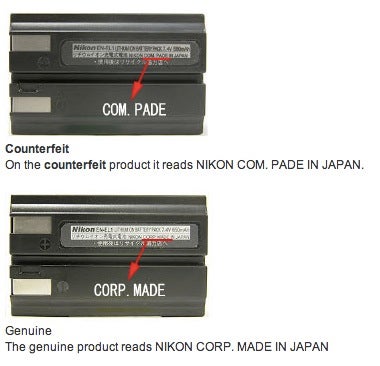 Counterfeit batteries are a real issue to manufacturers, with anonymous third parties passing them off as the real thing. Completely separate from 3rd party alternatives, someone may get saddled with a fake thinking they’re buying a genuine article, only to find sub-par performance (or worse, if it causes damage). But would you be able to tell if your battery is the real deal or not? Nikon’s website has examples of 10 of the company’s batteries, and the various way’s they’re mimicked.

The problem is, no one sets out to buy a counterfeit battery. If you’re buying a 3rd party battery, then that’s your choice (though many manufacturers aren’t big fans of that, either). But if you end up with a fake Nikon battery, it’s because you’re attempting to buy a real one, and end up with a forgery. And the only way to tell is to compare it to the real deal. According to Canon, 18% of consumers unwittingly bought forgeries last year.

The website lays out some of the myriad of ways a fake can be presented. It might be a spelling error (in any language), a missing box around an icon, a printed rather than etched section, or variations in holographic seals.

Nikon’s website is great in that it gives you a chance to see what the original should look like. We’d just like it if the images were a lot higher resolution.