Think you can tell the difference between a real and a fake? 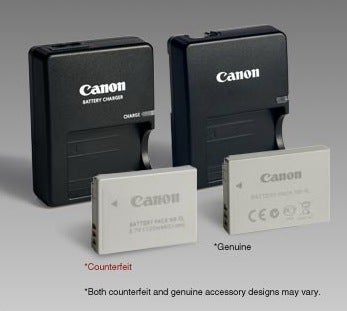 According to Canon’s counterfeit awareness site, the most commonly copied Canon goods are batteries and chargers. The study, which surveyed 1,069 electronics buyers in 2013, found some 30% of them bought fake goods. In a press release, Canon made the following points:

Unfortunately, the full study wasn’t released, so there’s a lot we don’t know about how Canon crunched these numbers. For example, if 18% of consumers don’t know they bought counterfeit goods, how did Canon get that number? Was it based on overall sale of counterfeits, minus those who knowingly purchased them?

For most consumers, the area they’re probably most likely getting faked electronics is flash storage. SD cards and USB drives are notoriously frequently faked, with some reports of even orders fulfilled by Amazon being counterfeit. Usually, sticking to major retailers (that means “sold by Amazon” not just “fulfilled by Amazon”) or through the company directly is usually the safest way to be sure. But if nothing else, examples like this show just how hard it can be to tell.