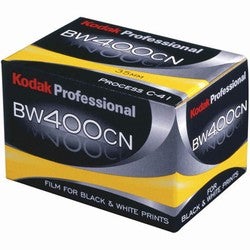 One of the most readily available black-and-white films on the market is no more. Kodak has announced that it will no longer be producing the easy to find, easier to get get processed, Professional BW400CN 35mm film. In a statement on its website, Kodak said:

You won’t find huge legions of fans defending the overall look of BW400CN film, but what it was really prized for was convenience. It is C-41 process, so any Walmart or drugstore that does color film processing was able to put the roll of film through, and get you back your black and white prints. Because of this, it was widely sold, and could be found in just about every store.

For those who don’t have a dedicated camera lab near them, and aren’t able to setup their own developing room, thankfully you can still purchase Ilford XP2, which is also C-41 processed.

With film use continuing to decline, it’s inevitable that more and more once common films will become harder and harder to find, and eventually discontinued. So now’s an excellent time to look into some other films that are worth shooting before they’re gone.