Our guide to starting a vintage Polaroid camera collection

How to build your own vintage polaroid camera collection. 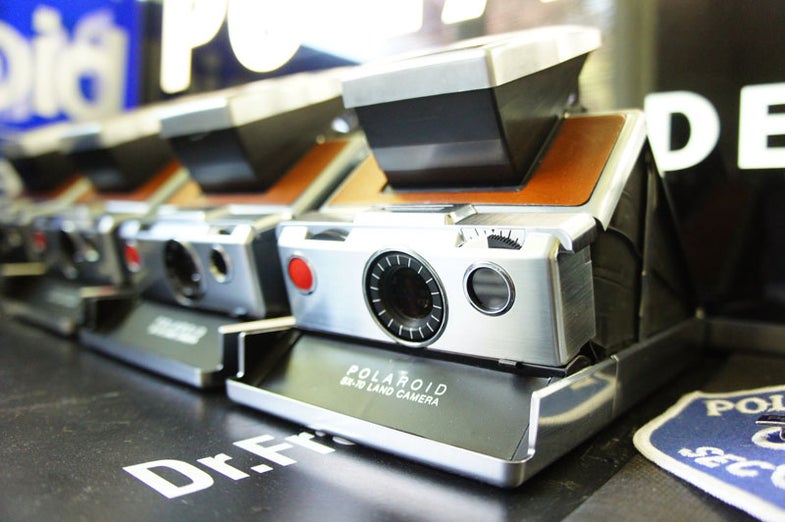 These SX-70 factory lab cameras are from the Waltham Factory in Massachusetts and were used by engineers to test film and accessories. Each has a unique nomenclature. Erik Karstan Smith
SHARE

Even if you didn’t grow up in the ’70s, you’re likely familiar with the Polaroid cameras that spit film out the front and, like magic, developed an image before your eyes. Polaroid provided instant gratification for the photographer and subject and because of The Impossible Project, the Polaroid Fotobar and the newly opened Polaroid Museum in Las Vegas, a new generation is discovering the joys of instant photography. When I heard The Impossible Project was resurrecting instant film for Dr. Land’s instant camera I decided to open the Dr. Frankenroid eBay store. I wanted to educate people—who might just be discovering the joys of instant photography—about the use, value and variety of these old cameras. I started seriously collecting in 2008, the same year I opened my store. I currently own over 100 rare cameras and accessories. Dr. Frankenroid is technically an eBay store, but it’s also an online museum for many styles of vintage Polaroid cameras and ephemera that allows people to see the variety and valuation of these cameras with their accessories in entire kits. Many of the most rare items in my store are actually priced to ‘not sell’. Polaroid produced millions of cameras around the world, but only a fraction of them have any real monetary value. However, a careful eye at a garage sale or local Goodwill can turn a small investment into a tidy return. I’ve met many people who have found box style 600 cameras (more on that later) at a garage sale or thrift store for $10 that ended up being worth hundreds.

Be Realistic About Your Budget

Polaroid collecting as a hobby can be very expensive. It’s hard to say how much I’ve spent collecting over the past eight years. My advice to new collectors is to keep it simple. You can have a nice display of common cameras for $1000 and have a lot more fun with those than with a more expensive collection that you’re afraid to use. The Land List by Martin Kuhn is a great free resource and way to really do your homework before you dive in. Consider this a crash course in vintage Polaroid camera collecting.

Having a mint condition camera with the box and original documentation will always increase its value, but a camera in any condition will always be more valuable than a damaged one. If the camera is broken or untested, it will probably cost more for a repair than to just purchase another camera. Non-working cameras can be desireable to interior designers or other people just looking for a decoration, though, so a particularly pretty or interesting-looking Polaroid camera can still have value if you know who wants it.

Get to Know the Camera Types

There are three basic categories of vintage Polaroid cameras: roll film cameras, pack film cameras and integral film cameras. Within each of these categories there are a variety of valuable models and prototypes.

Roll Film Cameras: These are the first instant cameras produced by Polaroid, but film was discontinued in the ’70s and for the most part they are obsolete. The Model One Hundred is the rarest of the roll film cameras, but this vintage Polaroid camera very difficult to find. I wouldn’t sell mine for under $1000 There are artisans who professionally convert these beautiful old cameras to use modern integral film and Fujifilm pack film. I suggest Jason at Wolf-Industry or Nate at Option8. My favorite cameras for conversion are the 110a, 110b, 120 and 900 electric eye, these range in price starting at $500 for a 900 Electric Eye to $1500 for a 120. 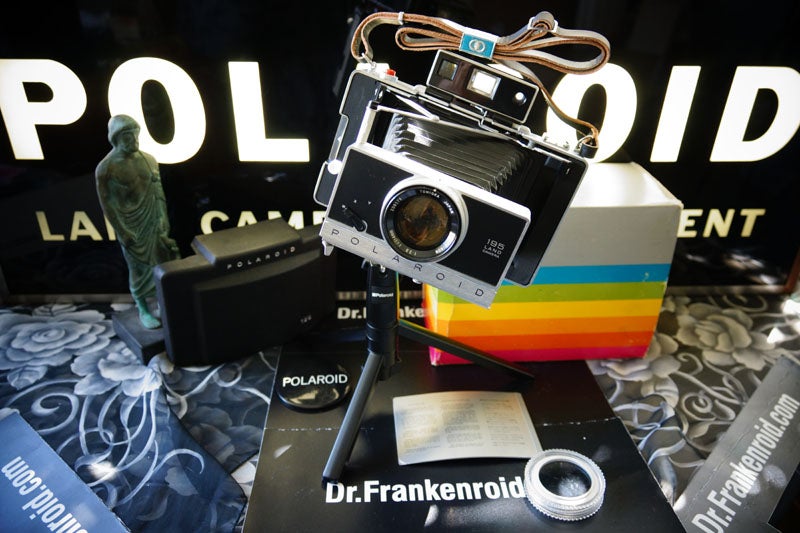 The Packfilm 195SE. This camera offers photographers total control of the settings. Smith says he has only found one of these cameras in the eight years he has been collecting.

Pack Film Cameras: These were the next evolution of Polaroid instant photography and professional photographers still use these gorgeous machines. Earlier this year Fujifilm announced they will no longer produce the black and white pack film, which only leaves the color pack film FP 100C. Professional photographers typically use the 180, 190 or 195, which range from $400 to $800 depending on condition and accessories. These models offer the photographer total control of the settings, but you can use a model 250 or 360 (around $250 with all the accessories) with automatic exposure for simplified photography. Street photographers love the 600SE with three interchangeable lenses (75mm with sight, 127mm and 150mm) and back, a complete kit goes for $1500. The most sought after camera in this category is the model 185. Polaroid produced the 185 in a small batch, with at least 500 given as gifts to friends of Dr. Land. Recently a reputable camera dealer sold a perfect example in the original box for $6500. The 185 may be the most sought after, but it’s far from the most rare.

Integral Film Cameras: This is the type of Polaroid most of us are familiar with. The SX-70 was released in 1972 and allowed people to watch their photograph develop right before their eyes without chemicals or pulling apart caustic film layers. This little silver and leather beauty is a simple to use, no frills solid-state analogue marvel. If you purchase a single Polaroid camera it should be the SX-70. If you want the best refurbished SX-70 Roger Garrell AKA FastCat99 is my suggestion. He has the best prices and is a qualified technician.

The integral category is divided up into SX-70 film cameras, 600 series cameras (box style, 680, 690) and Spectra cameras, which use a wider format integral film. There are dozens of SX-70 models that come in a variety of materials, colors and textures. The box style 600s were also manufactured in various color combinations or with corporate logos. 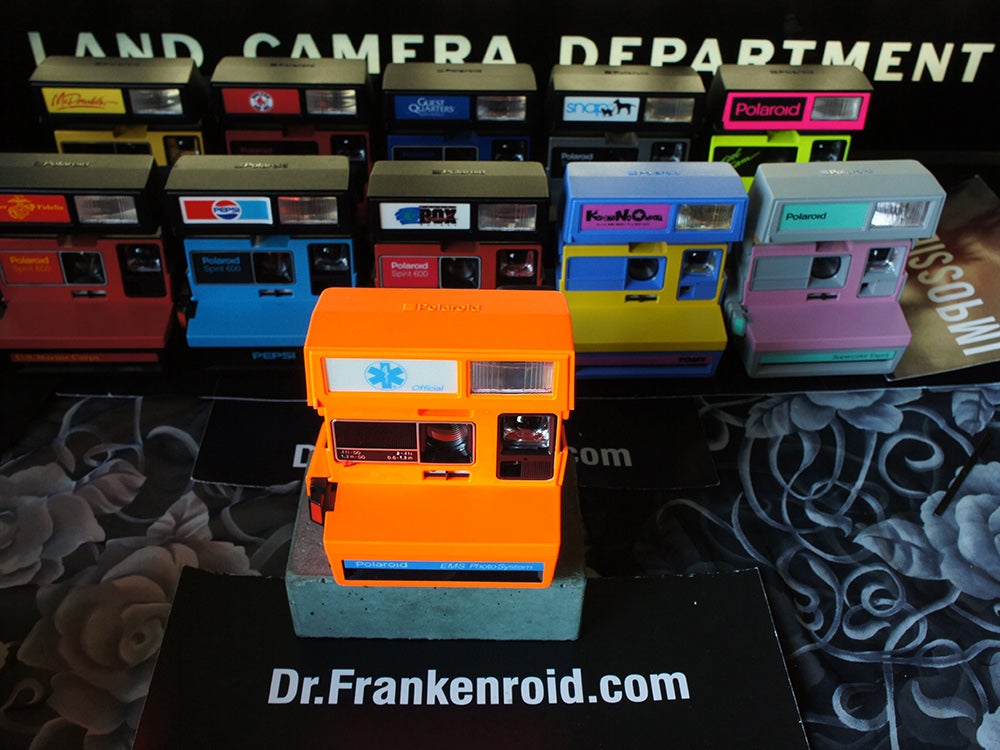 SX-70 eventually developed into the Sonar OneStep, which uses sound waves for autofocus and allows photographers to shoot in total darkness without the ir signature. The Sonar developed into the 680SLR and 690SLR, which are considered the most advanced SX-70s ever produced. The 680SLR and 690SLR have integrated strobe flash that tilt up and down in millisecond and use the Sonar to feel the environment and deliver the perfect flash angle every time. These are expensive cameras with the 680SLR going for around $200 and the 690SLR going for $500 or more. Collectors look for Gold edition SX-70, Gold edition Sonar and Special Edition SX-70 and Sonar. 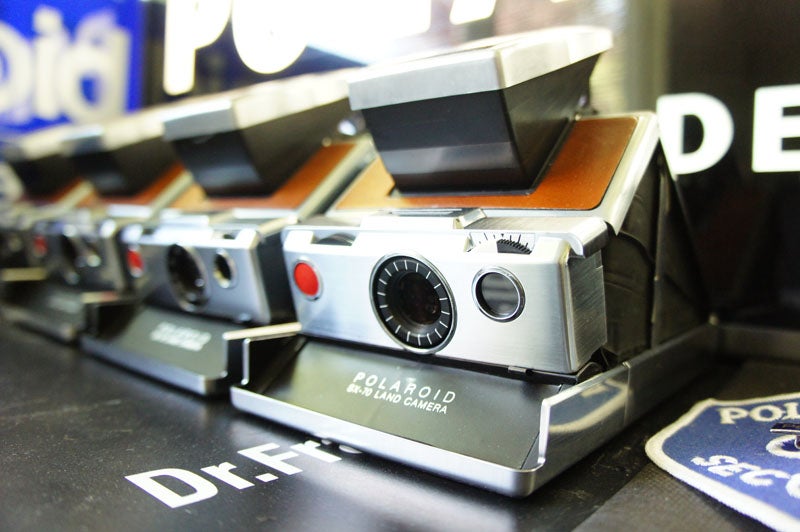 These SX-70 factory lab cameras are from the Waltham Factory in Massachusetts and were used by engineers to test film and accessories. Each has a unique nomenclature.

Prototypes and Limited Editions: These cameras are at the extreme collectable end. The Ronald Cam Sun600 LMS PhotoMagic System was manufactured by hand to test the idea for the box style 600 McDonalds camera. Other rare cameras include the 20×24 super large format instant camera. Polaroid manufactured less than ten of these, I’ve never even seen a 20×24 up for auction, but I’d imagine it would be valued over $100,000. Cartier released a very limited edition of 24 carat gold plated Spectra topped with a sapphire, it’s worth at least $20,000 or more.

If you have a Polaroid camera and want to know what it is worth please share some information in the comments section, drop me a message on eBay or contact me through Facebook.