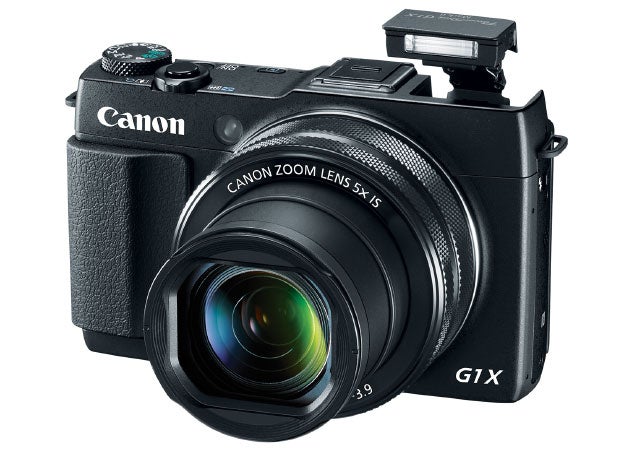 Like the waterproof segment, large-sensor compacts also continue to live on and Canon has made some notable improvements to their top-end G1 X and brought it into Mark II territory.

The G1 X Mark II has a 1.5-inch sensor, which isn’t as big as an APS-C sensor, but it still roughly 4x the size of a decent compact sensor. Despite its size, it has just 12.8-megapixels, which indicates that Canon is once again trying to maximize low-light performance. it also uses the new Digic 6 processor, which is Canon’s latest and greatest.

The lens is a 24-120mm equivalent with a maximum aperture range of F/2-3.9. The lens barrel actually has a pair of control rings, one of which clicks for navigating between settings and another that rotates smoothly for manual focus.

The AF system has gotten some attention, bumping to 31 AF points, up from nine in the previous version. You also now get a 3-inch touchscreen that tilts up and down for easier composition. That screen is more important than ever because the Mark II loses the optical viewfinder found on the original G1 X. If you want an EVF, you can add the optional one for $300.

As with most cameras at this level, you get the full suite of creative shooting modes and manual controls. You also get 14-bit RAW+JPEG capture, which is nice in a small camera. And of course you get Wifi and NFC because connectivity is currently king.

It will be available in April for $800. What do you think? Is there still a high demand for these high-end compacts? It seems that with all the new smartphone connectivity, it could be this category’s time to shine. Other cameras in the segment like the Sony RX100 Mark II are seeing a fair bit of success. It will be interesting to see how it plays out.