This flagship 20.3MP, APS-C sensor ILC makes the best use of Wi-Fi yet 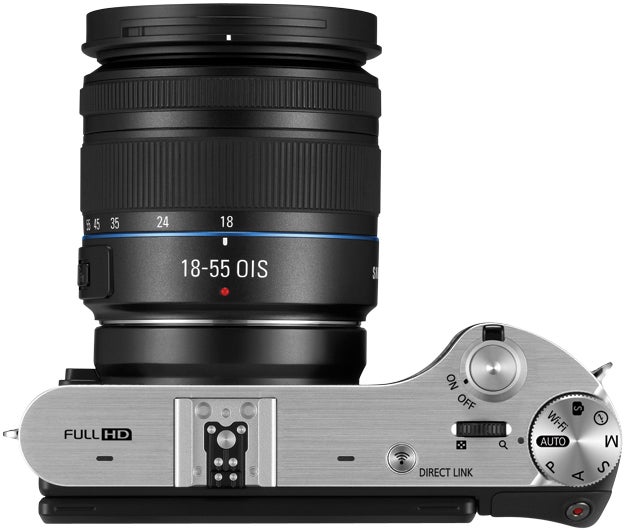 If there were any doubts that Samsung is making a name for itself in the camera business, they were put to rest with two simultaneous introductions this year. The Galaxy camera turned the tables on the mobile phone world by finally creating a camera that runs on a mobile operating system. And photography enthusiasts were awed by the specs on the company’s new flagship interchangeable-lens compact, the NX300 ($749, street, with 20–50mm f/3.5–5.6 lens; $798 with 18–55mm f/3.5–5.6 lens, shown; $999, street, with 45mm f/1.8 2D/3D lens).

Built around a 20.3MP APS-C-sized CMOS sensor, the NX300 boasts an impressive top shutter speed of 1/6000 sec and a tilting 3.3-inch AMOLED touchscreen. Plus, its built-in Wi-Fi lets you pair it with an iPhone or Android device, so you can push images to your Facebook page or copy them to your phone as you shoot. But can it make images that you’d want to share?

In the Test Lab
Our standard test procedure is to use the software that the manufacturer supplies with the camera to convert RAW files into uncompressed TIFFs for analysis, applying the software’s default noise-reduction settings. With the NX300, Samsung went the route of Leica by shipping the camera with Adobe’s Photoshop Lightroom 4.

We applaud this, as Lightroom is one of the best options for photographers with a RAW workflow (we always encourage people to shoot RAW for the best results and the most flexibility in post-processing).

Since Lightroom does not vary noise reduction automatically, nor does the camera maker offer default settings for it, we tested the NX300 as we did Leica’s M Monochrom: We applied 0%, 25%, 50%, and 75% luminance noise reduction with a goal of holding noise to a Low or better rating at as high an ISO as possible, while also preserving as much resolution as possible. For the test results in the chart on this page, we applied 25% luminance noise reduction from ISO 100 through ISO 400, 50% at ISO 800, and 75% at ISO 1600 and above.

Under these conditions, the NX300 earned an overall Image Quality score of Excellent from ISO 100 through ISO 400. By ISO 800 resolution dropped just below our cutoff of 2500 lines per picture height, the threshold for an Excellent rating. But noise garnered a Low or better rating all the way up through ISO 3200.

As is usually the case these days, the NX300 easily achieved an Excellent rating in our Color Accuracy test, in this case with an average Delta E of 5.5.

We measured enough noise at ISO 100 to warrant some noise reduction even at the camera’s lowest ISO. With a modest amount of reduction, noise squeaked into the Extremely Low rating band, while resolution checked in at 2540 lines per picture height. At ISO 400, resolving power dropped off to precisely 2500 lines. A surprisingly large amount of resolution held on through ISO 6400, where the NX300 turned in 2370 lines. Thereafter, resolution dropped more sharply, ending up at 2000 lines at ISO 25,600—still a respectable amount.

In the Field
Like many cameras lately, the NX300 has a somewhat retro style while also offering a fully modern interface. The body is metal, with ample rubber across the front and a nice rubber pad on which to rest your thumb. The texture of the rubber mimics the leatherette on a vintage rangefinder, and there’s even a snazzy brown option.

We liked the tilting touchscreen’s usefulness in framing images and adjusting settings, but at times we lamented the lack of an available electronic viewfinder for eye-level shooting.

The lone command wheel (we would prefer two) and the shooting mode dial compete for space. Often, when making an adjustment by rolling the wheel to the right, our finger hit the mode dial and stopped sooner than we would have liked. This clumsiness could have been prevented by a slightly different placement of the wheel or dial. Otherwise, Samsung made good use of the available space for button placement.

We would have appreciated more customized controls, though. As it stands, you can assign functions only to the trash button and Direct Link button—and the latter accepts only Wi-Fi sharing options.

The touchscreen controls were responsive. You can swipe from one image to the next in playback mode, and cropping is as simple as tapping a few virtual buttons and adjusting the size and position of the crop by sliding your finger across the screen. Other adjustments, such as adding filter effects or changing brightness, are equally easy.

Once you have the image as you like it, you can use the Direct Link button to share it. This is set to auto-share as the default, so it will push images to another device as you shoot. It worked well when paired with a Samsung Galaxy S3 smartphone, though images took a minute or so to show up on the phone’s gallery. So if you check right away, you might think it didn’t work, only to find the images in your gallery the next time you look. (Canon’s EOS 6D proved speedier in this respect.)

If you turn off auto-share, you can choose which images to move, and you can use your phone or tablet to operate the camera remotely. The camera can also be configured to send images directly to Facebook, Picasa, or Samsung’s AllShare cloud service, which you can configure to automatically push images to other photo-sharing sites such as Flickr.

Though Panasonic never got very far with its dedicated 3D lens for the Micro Four Thirds system, it didn’t stop Samsung from making a dual-purpose 2D/3D 45mm f/1.8 lens, which comes in a kit with the NX300. Inside, it moves into place two tiny LCD shutters that alternate 60 times per second between exposing the left and right halves of the sensor.

The result: 3D stills or Full HD video. Images are output in the standard MPO file type, and in our trials they played back seamlessly on a Sony Vaio 3D laptop. The images don’t appear to protrude out from the monitor much—rather, they produce the illusion of depth extending behind the screen surface.

Shooting is largely automated in 3D mode, so you don’t have a lot of control over camera settings. Also, though the effective field of view does not change, the camera fixes the aperture at f/6 while varying ISO and shutter speed for proper exposure. That’s a little easier to work with than the Panasonic’s fixed f/12 aperture, but it still wasn’t as much control as we’d like. We did appreciate that the camera simultaneously captures 4.1MP 2D versions with 3D images.

During normal shooting, the NX300 provides quite a bit of control. Continuous shooting tops out at 5 frames per sec with continuous metering and AF, and it can reach 8.5 fps if you’re willing to sacrifice those conveniences. And if you can live with 5MP images, you can capture 30 frames in 1 second, 15 fps for 2 seconds, or 10 fps for 3 seconds—again with focus and metering locked. Break out your golf clubs, it’s time to analyze that swing.

Unfortunately, the AF couldn’t always keep up with the 5 fps burst when shooting in well-lit interiors. This usually occurred when panning from nearby to faraway objects. It did a better job with objects moving toward or away from the camera.

The Bottom Line
There’s a lot to like about the Samsung NX300. It can produce extremely detailed images, with accurate colors, and makes them easy to share with your friends. Its dedicated movie button lets you switch to recording video quickly, and the footage we captured was very pleasing.

If you’re a fan of 3D images, the NX300 and its lens offer a nice way to incorporate 3D shooting into your routine, while being able to switch back to 2D without changing the lens.

While the NX line of lenses can’t match the breadth that’s available for Micro Four Thirds, it offers a more expansive array of glass than Sony’s system currently does, including some wonderfully sharp optics, such as the 85mm f/1.4 and the 60mm f/2.8 macro. If only Samsung would see fit to allow for a hot-shoe mounted EVF, we’d be even happier.

In the meantime, the NX300 remains a great value for the price, especially considering that it ships with Adobe Lightroom 4.