This gadget promises huge resolution, medium format style images from a Sony NEX camera, but can it deliver? 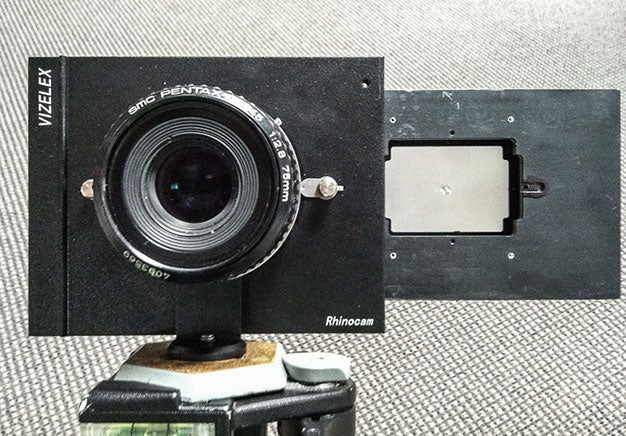 Even as DSLR sensors hit new heights in terms of resolution, medium format digital backs are still the big boys on the photographic playground. So, when Fotodiox announced a product that would allow you to get medium format-caliber images out of an MF lens and a Sony NEX body, the internet went wild. We got our hands on their new Rhinocam and took it for a test run out in New York City. It’s capable of some pretty interesting and impressive things, but it’s not for everyone.

Medium format lenses throw an image circle that’s much bigger than an APS-C sensor. The Rhinocam lets you move the sensor around behind the lens, using multiple exposures to capture as much picture as possible. Once the photos are stitched together, you get a super high-resolution image with the same field of view and depth of field the lens was originally intended to produce. It’s similar to the Brenizer effect, which is commonly done with DSLRs.

The left side of the Rhinocam has a focusing screen for composing your shot. When the lens is positioned in front of it, you see an upside-down representation of what the lens sees. It’s not terribly bright, so you’ll likely want to use a loop or even a hood like you would with a large format camera.

While you’re composing and focusing, the sensor of the camera is left pretty much wide open to the elements, which is a bit of a concern. You might want to cover it up with something until you’re ready to slide the lens over in front of it. You definitely want to keep the camera turned off when the sensor is uncovered.

Once you’ve focused, you slide the lens in front of the camera body, lining up the shots using a series of white or orange dots on the Rhinocam itself.

You take a photo, move the camera back to the next dot, then shoot again until you have eight exposures. Actually moving the plates around is simple, but since the plates are just sliding against one another, it can take a little futzing before you get it perfectly lined up.

For reference, the iamge above with the gap was shot using an NEX-7 and measures a massive 14498×11660 pixels. That makes it around 170-megapixels including the extra white space.

Even when you do it exactly right, it’s likely the images still won’t line up 100% perfectly unless you get neurotic about keeping your tripod level. Because of that fact, we found it a pretty good idea to frame a little loosely in case you need to do a little cropping. You can see the typical final result of panorama mode above. I’ve obviously sized it down to fit this page, but the original JPEG image was roughly 56 MB.

Under the right conditions, the Rhinocam really does deliver what it promises. You get a super high-resolution image and, because you’re moving the sensor around on a flat plane rather than rotating it like you would on a tripod, distortion is kept to a minimum. Plus, because you’re using the actual image from the medium format lens, you get the appearance of shallower depth of field, which can be very appealing.

You need the right circumstances to make it work, though. Because you’re taking 8 shots, your subject and background need to be basically stationary. We had to rush like crazy to get a shot on the NYC streets that didn’t have cars in the photo that would get hacked up in post.

We also ran into a problem where a slight cloud rolled in as we were shooting and changed the exposure and the color temperature, which was very noticeable when the images were stitched together.

As far as the device itself goes, it feels very sturdy. The plates are burly and will likely last a long time. There are some moving parts, like thumb screws for rotating mounts, and those feel pretty robust as well. Even the tripod socket is built tough, which we appreciated.

We tried a couple portraits and it’s totally possible to get a decent result, but once again, you have to be careful. Moving is out of the question, and you should try to get as much of the subject’s face in one frame as possible to avoid distortion from the stitching process. If you’re thinking you can use it with a child or an animal, though, you’ll be in for some frustration.

Ultimately, the Rhinocam will certainly be a useful tool for some shooters. For instance, if you’re using flash, it’s probably not your best bet. If you’re a landscape shooter, though, it might give you more of the detail you crave.

Then there’s the matter of price. Compared to a full-on medium formate digital back, its $500 price tag is cheap. However, you still have to have a Sony NEX body, as well as a medium format lens in one of the accepted mounts. Plus, you’ll probably want to invest in a decent light meter since the setup renders the camera’s meter useless.

Does it replace a medium format back? Nope. But, it does work, so if you’re a big fan of the Brenizer effect or you shoot a lot of stationary subjects, it’s worth checking out.