Remember your first cellphone camera, and the super crappy pictures it took? Want to recreate those? 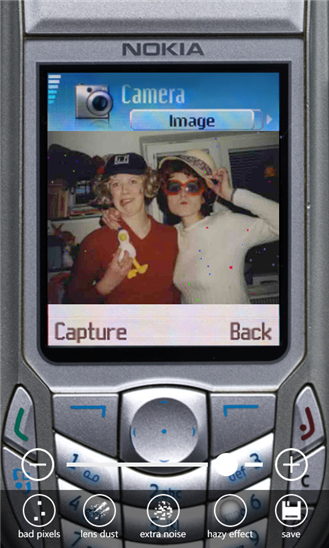 Old smartphone cameras were just terrible. The images they took were rarely in focus, and abounded in all sorts of weird errors and noise. Which I suppose made it only a matter of time before someone made an instagram for old camera-phones. So meet Pixel Heritage, only available on Windows Phone, which brings back the horrible photos we used to take.

Pixel Heritage is a collection of nine simulated old Nokia phones, each of which takes suitably atrocious images, which you can tweak by adding dead pixels, more noise, dust, and haze — recreating the super-crummy shots of a decade ago.

Thankfully, the app is free, and it does retain some nods to modernity — like sharing over Facebook. It’s really quite astonishing how closely this parallels the whole lomography movement (and associated apps), but just using horrible old camera-phones rather than horrible old 35mm plastic cameras. And it’s more than a little endearing.

Now you just have to make sure these photos don’t end up in someone’s art book.