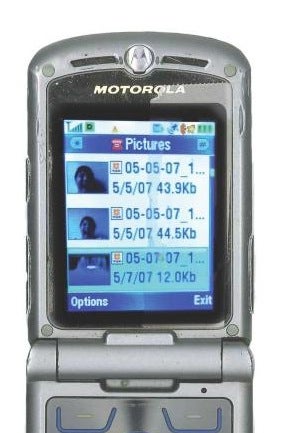 Artist Kyle M. F. Williams bought 44 broken and damaged Razr phones on eBay for a project he was working on — but found that many of them still had private images and text messages stored on them. So, naturally, he created a print on demand book. The content ranges from the entirely banal to the rather salacious — as it seems that no effort was made to wipe the phones of their contents.

The phones were being sold “as-is” from a phone repair shop — one assumes they were either deemed unrepairable, or the owners didn’t care enough to reclaim them. If nothing else, this reinforces the message to wipe all the content off your digital devices before you throw them out/sell them/ditch them at Goodwill. You wouldn’t want the images coming back to haunt you.

The other interesting facet of this ties in a little to that Facebook copyright meme that’s been floating around. One of the reasons that piece of text is pointless is because you already own the copyright on any photo you ever take — which in this case is doubtless retained by the original users of the phone. Does that mean this book is violating all their copyrights? Or is repurposing the images in this case sufficiently transformative to skirt that issue?