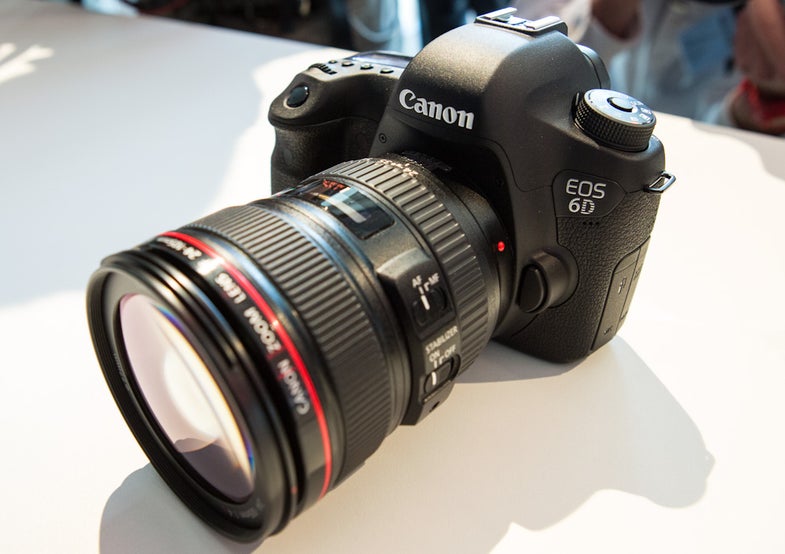 It’s just a few hours old, but I just got some time in with Canon’s new 6D full-frame DSLR. The first thing I noticed was that the grip is a bit smaller than the one found on the 7D. Otherwise, the bodies feel very similar. The 6D does feel a little lighter, though, and the shutter sounds a bit quieter.

One of the things that has some people concerned is the 11 point AF system. According to Canon, the center point is a high-sensitivity cross-type, but that will only work if your lens opens all the way up to F/2.8. With a slower lens, you won’t get max speed out of it.

ABOVE: The 6D is a bit smaller than the 7D on the right. You can especially notice it in the grip.

I shot for a couple minutes under good, flat light and the AF actually did seem a little faster than the 7D. The 11 point arrangement doesn’t offer as much control, but it’s easy to navigate between points. We’ll of course need to do real testing in our lab and in low-light situations, but off the bat it feels fast and accurate, which is a good thing.

The layout of the camera has been changed a bit, reducing the number of buttons. In fact, there are now no buttons at all to the left of the screen. The button used to zoom during review isn’t in the most convenient spot. It’s also a bit of a worry that more modes may need to be accessed via menus, which is never quite as quick as using a dedicated button. There are now five buttons on the top of the camera near the secondary display, though, so the focus is clearly on letting you find functions without taking the camera away from the eye.

ABOVE: Notice the difference in button layout between the 6D (left) and the 7D (right).

I got a chance to experience the mobile app that can control the camera and that’s truly impressive. It creates an ad-hoc network and gives you live view (which is likely going to be a bit choppy even on faster WiFi) and a surprising amount of control over the camera. The reflection on the iPad screen made our video demonstration a bit useless, but I can tell you that it worked smoothly and quickly. Switching exposure settings is reflected in real-time. More and more companies are embracing the idea of the smartphone or tablet as a camera accessory and I think it’s great.

The model we held wasn’t totally final, so we couldn’t get any sample images to compare, but even when cranked up to ISO 25,600, the JPEG images looked good enough on the LCD that it would probably be totally possible to run them online and have them actually look decent. Of course, the color accuracy takes a hit with the ISO cranked as such, but it didn’t appear to have that abstract art look sometimes found at sensitivities that high. Even when zoomed into 100%.

One slightly odd issue I noticed with the pre-pro model was that the very corners of the images were being cut off with the 24-105 F/4L IS zoomed all the way out. It was distracting, but will likely be fixed before the final version is released. Since the release is all the way in December, there’s likely still work to be done.

ABOVE: The mobile app integration allows you to control the camera from afar using WiFi.

There are still a lot of questions to be answered about the 6D, but so far it looks promising. We’re very excited to see how it compares with its Nikon counterpart, the D600. If there are final 6D units on the floor of the show tomorrow, we’ll be sure to bring you some sample images.