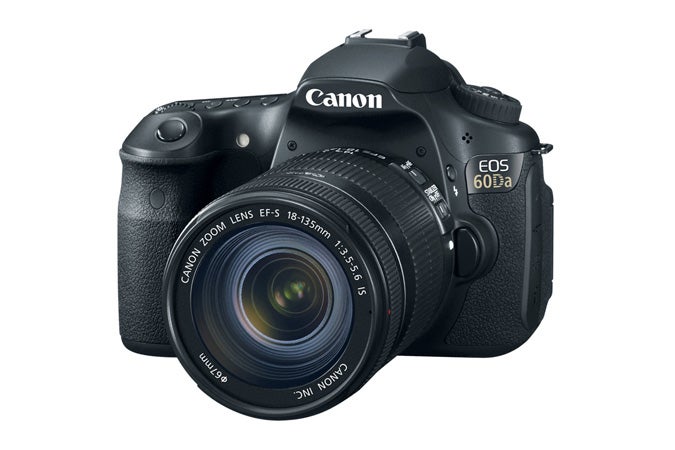 Like the EOS 20Da that came before it, Canon’s EOS 60Da shares many of its features with its non-astronomical sibling. They have made a few tweaks, however, to facilitate taking photos of the heavens.

The 60Da has a modified infrared filter as well as a sensor that has been adjusted to reduce noise over long exposures while increasing its sensitivity to hydrogen alpha (sometimes known as H-alpha). There’s plenty of H-alpha floating around in space even though our eyes — and most traditional digital camera sensors can’t see it. It usually plays a pretty pivotal role in those awesome images of the sun we’ve been seeing lately that depict the wild solar storms and flares. The 60Da’s APS-C sensor is roughly three times more sensitive to H-alpha with some help from the modified infrared filter. The final result is a 20-percent increase in transmittance of the hydrogen alpha line.

Since H-alpha is a biproduct of hydrogen atoms (this specific kind occurs when a hydrogen electron drops an energy level) it tends to have the most dramatic visual effect in nebulas rich in that element. The visual spectrum line that’s created has a wavelength of 656.28nm, which falls into the realm of reds, which is part of the reason you see so many striking space images in that shade.

The Vari-angle LCD is another key feature for astrophotographers. It has a resolution of 1,040,000 dots and allows for easy composition when the body is attached to a giant lens or even a telescope that needs to be precisely positioned. In live view, they’ve added a totally silent shutter mode (the mirror is already up in live view, so the electronic shutter doesn’t actually need to make noise) to reduce camera jiggle on long lenses. According to the press material, the noise reduction has also been “enhanced” for long exposure shooting.

Packaged with the 60Da is Canon’s RA-E3 Remote Control Adatper which makes it compatible with timing remotes like the TC-80N3, which you’ll have to buy on your own. It also comes with an AC adapter kit so you can keep the camera plugged into an external power source. Long exposures like those required for this kind of space photography can be brutal on batteries, especially if you’re out on cold nights which are usually excellent for capturing stars.

The EOS 60Da will only be available from select dealers and will cost $1,499 when it starts shipping earlier this month. That’s about a $500 premium over the standard version, but that’s likely a non-issue for dedicated astrophotographers. We’re excited to take it out into a dark field and give it a try. We just hope we get our review body before the mosquito season is in full swing.