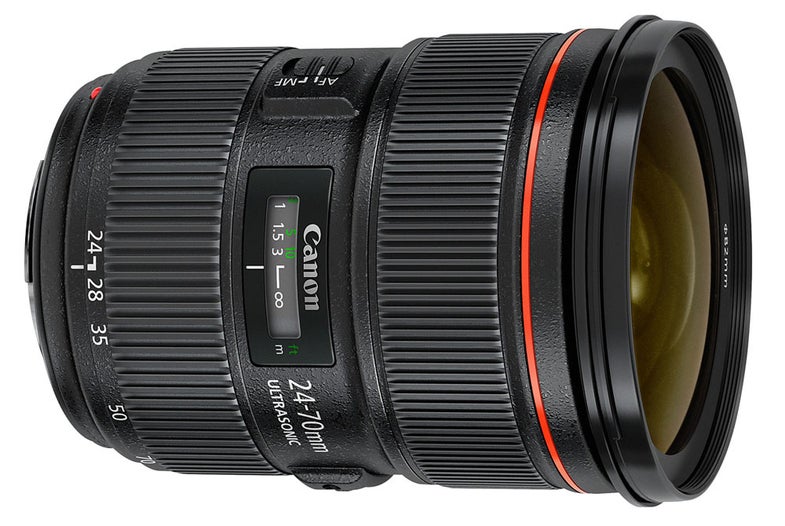 Canon EF 24-70 F/2.8L II USM Zoom Lens Canon announced an update to one of their most popular zoom lenses, but it surprised a lot of folks when they didn't include IS, especially considering the steep $2,299 price tag. But, Canon promises more ruggedness out of a lens that was already built like a tank as well as some tangible optical performance upgrades to help justify the cost. We'll be very interested to see if it delivers once it hits our lab. SEE THE FULL POST.
SHARE

The EF 24-70 F/2.8 has been a go-to lens for many photographers for years now, but the new version promises to cut down on chromatic aberration and increase durability.

In the upgrade department, the standard zoom gets a Super UD lens element, as well as a pair of standard UD elements they claim will help increase image fidelity across the entire frame and throughout the zoom range. It has a circular, nine-blade diaphragm for smooth blur.

The original 24-70 F/2.8 was known to be a pretty tough piece of kit, but Canon has upped the ante on that a bit, giving it better weather sealing and making it more resistive to water and dust. There’s also a zoom-lock lever to protect it during transport, and a fluorine coating to protect the exposed elements.

It’ll be available in April for $2,299. It’s interesting to note that Canon hasn’t added IS to this lens as many expected them to do. At this price point, it would’ve been nice to have.

Canon has however added IS to a couple of its popular wide-angle prime lenses: The EF 24mm F/2.8 and the EF 28mm F/2.8. Canon claims they’ll combat motion blur by four stops. Both use new aspherical lens elements and have seven-blade circular diaphragms for smooth blur. They also both have Ultra-Silent Motors, so you can use AF during video if you so choose.