Should camera design take a page from camcorders? 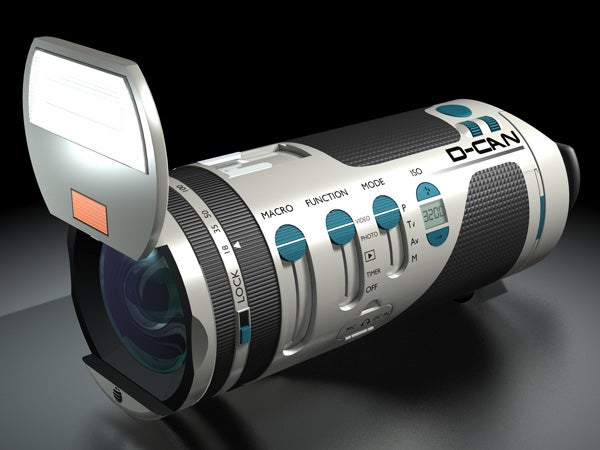 Designer Jean-michel Bonnemoy thinks that we’re holding cameras all wrong. After all, modern camera design is very much a holdover from when cameras still needed to hold a roll of film, but with modern optics and tiny sensors, why bother being stuck on that form factor? As detailed at YankoDesign, his concept for the D-CAM is essentially that of an eye-level scope, with controls embedded on the side.

I think this misses the boat of a few things. Primarily, because it ignores what’s the most obvious trend in current photography, which is definitely in shrinking the size of cameras. This thing is the size and shape of a water-bottle, which you might find people less than likely to lug around with them. We are, however, in a time of relatively plain camera design. Cameras like the old Sony F717 and Nikon S10 played around substantially with form factors in interesting ways. More recently Casio released the Tryx, which had an interesting form-factor but lackluster performance, and then there’s the Lytro, but the vast majority of modern cameras follow a very limited style. It would be great to see at least a little more experimentation in product designs.