The upscale sibling in the Nikon 1 family 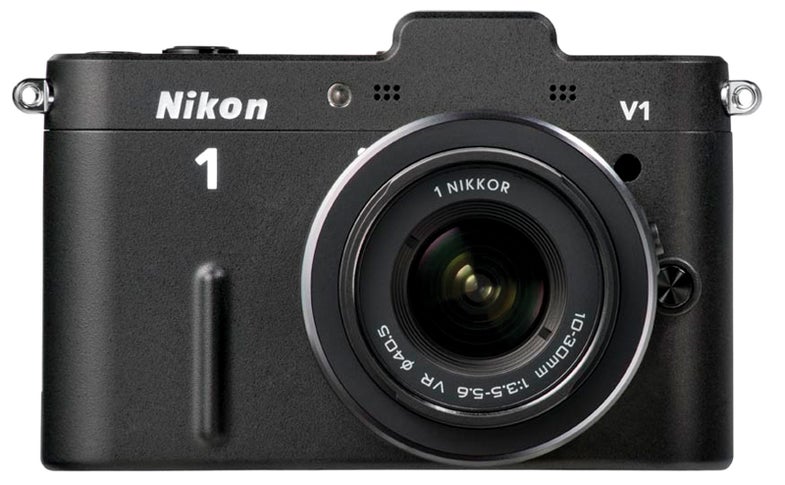 Like its J1, Nikon's V1 has phase-detection AF sensors embedded in its imaging sensor. Using phase detection in brighter light proved to be fast, but in low light, where the camera switches to contrast detection, AF slowed noticeably.
SHARE

When nikon staffers first showed us the new 1 series of interchangeable-lens compacts (ILCs), they explained that the company had thrown everything out the window to design these cameras from scratch. Now, after having tested both the V1 ($900, street, with 10–30mm f/3.5–5.6 VR lens) and the J1 ($650 with same lens), we wish Nikon would have kept that window closed, at least a little. While its built-in electronic viewfinder makes the V1 more pleasant to use than the J1, it shares many of its sibling’s shortcomings.

In the Test Lab
In our December 2011 test of the J1, we noted that the sensor’s size (a new format Nikon calls CX) limited that camera’s performance. The same can be said for the V1, as the two cameras yielded very similar image-quality results. Though our test of the V1 showed slightly lower noise scores at certain ISOs, the margin was so small that this could simply be a result of normal variances in manufacturing.

Like its sibling, the V1 earned a Very High rating in overall image quality at ISO 100 and 200, based on RAW files converted to TIFFs using the bundled ViewNX 2 software.

But like the J1, the limiting factor was resolving power. While the V1 reproduced enough detail to rate Very High in resolution at its bottom sensitivity setting of ISO 100, with 2010 lines per picture height, at ISO 200 it stayed just above the 2000-line cutoff, and at ISO 400 the resolution slipped to 1925 lines. At ISO 800 it showed a respectable 1900 lines, but after that point resolution began to drop off faster. At the camera’s top sensitivity of ISO 6400 (Nikon calls it Hi1), tested resolution was down to 1700 lines.

That is enough for small prints and sharing images online. But it seems lacking compared to Panasonic’s less-expensive Lumix DMC-G3, which resolved 2570 lines at its lowest sensitivity of ISO 160. And with noise reduction at its insufficient default setting, the G3 retained most of that resolution, with 2480 lines at ISO 6400. This means the G3 at its highest ISO can outresolve the V1 at the Nikon’s lowest. And while the G3’s images will be quite noisy when processed at the default settings, it has an extra 400 lines of resolution to spare for noise reduction.

Speaking of noise, Nikon does a good job of keeping it under control with the V1. The camera achieved Very Low or Extremely Low ratings from ISO 100 through 800. At ISO 1600 and 3200, noise remained in acceptable territory, with Moderate ratings. But at the highest sensitivity setting, noise was Unacceptable (3.7).

The Lumix G3, by comparison, fared worse in our noise test, reaching Unacceptable by ISO 800. But if you are willing to experiment with noise reduction, you can fare better than you are likely to with the V1. (To its credit, Nikon steps up its default noise reduction values as ISO increases, rather than setting the same low value throughout the range, the way Panasonic does.)

Nikon also got color accuracy right on the V1. The camera showed an average Delta E of 7.4, earning it an Excellent rating. When we ran that same test on a JPEG captured simultaneously with the RAW file, color accuracy fell to 9.2—yet another reason to shoot RAW instead of JPEG.

In the Field
The V1 and J1 have only a few key differences. Unlike the J1, the V1 has a mechanical shutter, though the option of using the “electronic” shutter (essentially sampling the sensor) remains an option. The V1 also lacks the J1’s built-in flash, instead offering a small, nonstandard accessory shoe to the left of the built-in EVF. (The J1 lacks a viewfinder.)

The V1’s matte-black finish feels nice in the hands. And, while we appreciate Nikon’s attempt to provide some sort of grip, the rudimentary ridge below the shiny 1 on the front of the camera didn’t really help.

Meanwhile, the controls are just as lackluster as those on the J1. We like that Nikon uses the four directions on the menu navigation pad for direct access to controls. But when you try to access drive modes from the control pad, you get only the self-timer menu. Want continuous drive for burst shooting? You will have to search the menus for this option. In fact, you have to go to the menu for far too many of the V1’s controls.

Even changing shooting mode—program, aperture-priority, shutter-priority, manual—requires the menu, because Nikon didn’t use all of the possible spots on the camera’s wheel. Instead, the wheel guides you to a number of gimmicky image modes, such as Motion Snapshot and Smart Photo Selector, instead of the standard shooting modes (e.g., Aperture and Shutter Priority) that we’d prefer to find there.

The Bottom Line
With the 1 system cameras, Nikon seems to have lost focus on what has made it such a great camera manufacturer. The company that always put an emphasis on producing extremely sharp lenses and cutting-edge, rugged camera bodies has decided to target a lower common denominator with its ILCs. Sadly, outside of flashy ideas like Motion Snapshot—a cute trick that will likely get old fairly quickly—the V1 doesn’t offer much else.

Given its convoluted control system, Nikon DSLR shooters would have an easier time shooting with Panasonic’s G3 than they would with the V1. And they can put the money they save toward one of the many lenses available for the Micro Four Thirds format that have yet to come around for the new Nikon 1.