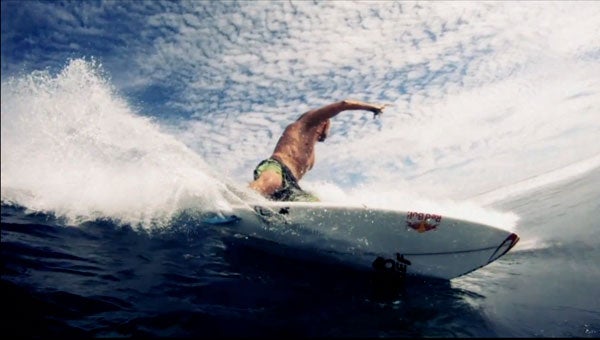 Bullet time is the effect achieved when a subject is surrounded (or at least partially surrounded) by cameras that are all fired at the same time. You might know it as the Matrix effect. Some creative surf videographers achieved a similar effect using a custom rig fitted with 30 GoPro helmet cameras. The results are, well, rad.

You can see the effect in action a couple times in the video, but my personal favorite is the one that starts around :34 seconds in. The rig is impressive. You can see a photo of it during the assembly process over at Core77. There’s also a bunch of intormation in the behind-the-scenes video posted below.

While the gear used to shoot the footage is still pretty expensive — 30 GoPro HD Hero cams will set you back $6,000 before you even get to building the rig — but compared to what it used to cost to make pro-looking videos, it’s still kind of a bargain.

It’s the perfect video to watch on Tuesday morning, especially if you’re sitting at a desk far from the beach.