A military-grade camera bag aimed at urban cyclists (and those who want to look like them). 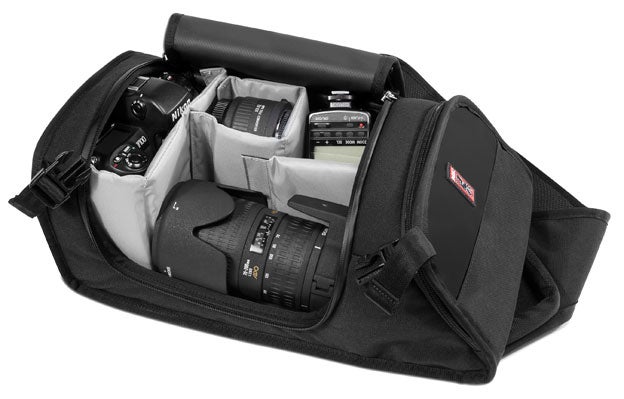 Chrome is best known for making virtually bomb-proof messenger bags used by urban cyclists (and people wanting to look like bike messengers) everywhere. But, the Niko marks their first foray into camera bags.

The Niko has a weatherproof shell made of 1050 denier nylon with an 18oz. truck tarpaulin liner with a nylon facing. Translation: It’s made out of really tough stuff, which is why they give it a lifetime guarantee. It has a volume of 11.5-liters, which is enough room for a DSLR body, a couple lenses and various other accessories. It won’t accommodate a laptop, but it can handle a tripod or a bike pump.

It uses a single shoulder strap, which has Chrome’s signature seatbelt-style clasp, so you can take it off easily, but don’t have to worry about it coming unhinged and ditching your gear on the ground.

The whole thing weighs 2.5-pounds, costs $95 and comes — fittingly — only in black. As someone who has spent a lot of time on a bike in an urban area, I have to say that it all sounds very promising. Riding with a normal backpack on is fine, unless you want to stop and shoot something, in which case you have to take the whole pack off. The sling makes the process a lot simpler. Plus, the zip-around entry is nice because it’s less likely to jangle itself open during a tough ride.

Of course, if you’re getting on a mountain bike, you could also consider one of these rugged, trail-oriented packs. But they won’t go nearly as well with your cycling cap. They’re also throwing an urban photo contest to celebrate its release, which you can check out here.