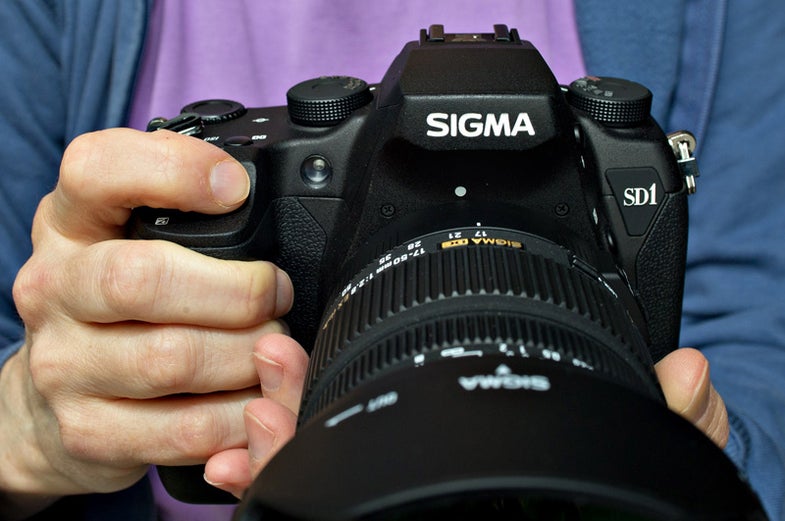 While we’re still waiting for a full production sample of Sigma’s new flagship DSLR, the SD1, we did get to check out a preproduction unit recently. As with all preproduction samples, you never quite know what is final and what isn’t. We’re told that the design of the body is final, so buttons and the overall shape of the camera should remain the same. But, it’s impossible to know anything about what might change inside the camera and it should be assumed that the firmware will go through at least one more iteration before everything is finalized. So, we can only really comment on the body design, and we’ll also mention a little bit about what we’ve seen of the camera’s menu system.

By the numbers
First though, lets look at the specs. The SD1 basically triples the pixel resolution of the imaging sensor compared to Sigma’s other current DSLR, the SD15. The SD1 packs three layers of 15.3MP each, for a total of 46MP onto a true APS-C sized Foveon sensor with a lens factor of 1.5X. Previous Sigma cameras have had Foveon sensors that were slightly smaller than APS-C, with lens factors of 1.7X. In the past, we have found that the effective resolving power in our lab tests, in which we shoot a black and white resolution test target, have shown the Foveon sensors to be compatable to cameras that have a little over half the total pixel count of the Foveon. So, for the SD1, we’d expect resolving power that is on par with the 24.6MP cameras we’ve seen from Sony and Nikon. Again though, we’ll have to wait for a final production sample to be sure.

While we don’t expect to see 46MP of resolving power out of the SD1, we can expect to see large RAW image files. To handle these large files, Sigma is including two of their TRUE II image processors in the SD1. Hopefully this will prove enough processing power to maintain a speedy shooting experience.

On top of the processing power, the SD1 requires a large buffer to work with those large files. When shooting full sized RAW+JPEG files, Sigma says the SD1 will capture up to 7 frames at 5fps. According to the spec sheet, each RAW + JPEG pair could top 55MB. That’s a large buffer and SIgma says that they’re using high-end DDRIII memory in the camera.

Between the buffer memory, the dual processors, and the larger sensor with 46 million light gathering cells in it, the SD1 isn’t a cheap machine to put together. There was a lot of Internet chatter when its $9,700 MSRP was announced. But, if previous Sigma cameras are any indication, we can expect that the actual street price will be considerably less than that number. We’ve already seen an indication of that with the prices recently shown on Sigma’s own site showing kits that can be ordered directly from them.

How does it feel?
We’ve always been pleased with the feel of Sigma’s DSLR bodies in the past and the SD1 is no exception. As you can expect from a higher- end model, it’s got serious heft. However, its grip is wonderfully sculpted and, with the 17-50mm f/2.8 EX DC HSM OS lens attached, it balances very nicely. You’ll want to use two hands to control it, but as should be the case, you don’t have to use your left hand to support the camera as much as you would with some bodies. With the SD1 and the 17-50mm f/2.8, your let hand is free to zoom, focus, or switch functions such as drive, flash, OS, or jump into the menu.

With a well defined notch for your middle finger, the SD1’s grip still keeps the camera body secure in your hand while you press buttons and spin dials and wheels with your right thumb and forefinger.

Like most higher-end DSLRs, the SD1 has two control wheels. One is embedded vertically behind the shutter button, and the other is atop the camera positioned as a dial to be turned with your thumb. Buttons abound to control exposure compensation, metering, ISO, and AF. Meanwhile, there’s also a button to access the quick menus. The SD1 makes even better use of its buttons with a pair of quick menus instead of just one. You can move between the two with the control wheels, while the four directional buttons ont he camera back switch between letting you access AF drive mode, flash mode, ISO, and metering; or color mode, file type, white balance, and image quality settings. We’re surprised that no one has done something like this yet.

When we tested the SD15, we had problems with the camera turning on in our camera bag because the camera turns on by turning the drive mode dial. This is still the case with the SD1, but its dials take slightly more force to move and didn’t end up turning the camera on for the weekend that we spent with it so far. In fact, the overall feel of the buttons and dials on the SD1 is nicer than the ones on the SD15. Everything about the body feels like a step up and very solid. Plus, it’s splash proof, like some newer Sigma lenses, which is nice to know when shelling out so much money for a camera.

What do we think?
We always reserve our judgment on a camera until we see the results of our lab test. So far, we’re impressed with what we’re seeing from Sigma with the SD1. As often happens with their DSLRs, most people try to compare them directly with DSLRs that use Bayer-array sensors instead of the three-layer design of the Foveons Sigma favors. however, fans of Sigma always point to the film-like nature of the images that their cameras produce, with very smooth tonal gradations and detail in colors that they often say goes beyond other DSLRs. In the past we’ve definitely appreciated the smooth gradations of color that the Foveon sensors yield. As always we look forward to getting a testable final production sample of the SD1 to run through the Popular Photography Test Lab.