Producing excellent-range SQF numbers, this ultrawide lens is a pleasure to hold. 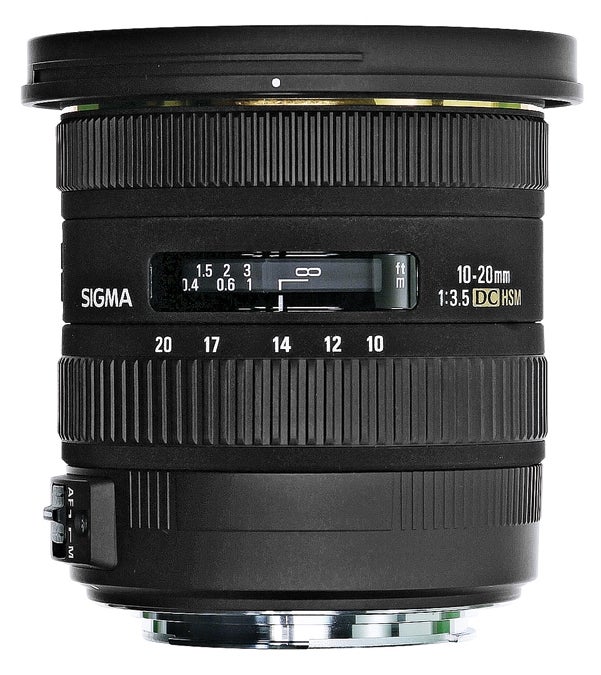 Sigma’s widest nonfisheye and fastest ultrawide zoom, the constant-aperture 10-20mm f/3.5 belongs to the EX family of sturdily built, optically gifted Sigmas. To control multiple forms of aberration, it uses three low-dispersion glass elements and four aspheric elements-the most of any Sigma.
A 15-30mm equivalent on most DSLRs, it joins Sigma’s slower and less expensive 10-20mm f/4-5.6 EX ($480, street), which stays in the lineup.

A pleasure in the hands, it’s slightly large and heavy by digital-only ultrawide standards: About two ounces heavier than the Nikon, it’s the rare digital ultrawide that takes 82mm filters instead of 77mm. It’s also large enough to block pop-up flash output at most focal lengths and focusing distances.
This internal-focusing lens uses an HSM motor for extremely quiet, very fast, and accurate autofocus. Both zoom and focusing rings turn smoothly, though the latter is noticeably overdamped.

Sharp, with high contrast, it produced Excellent-range SQF numbers at every tested focal length, with distortion control that matched or beat that of the more expensive Nikon. And its control of vignetting was even better.

One of the few disappointments, though, was close-up performance: Its 1:6 magnifying power is stronger than the advertised 1:6.6, but no match for either the Nikon or Tamron.