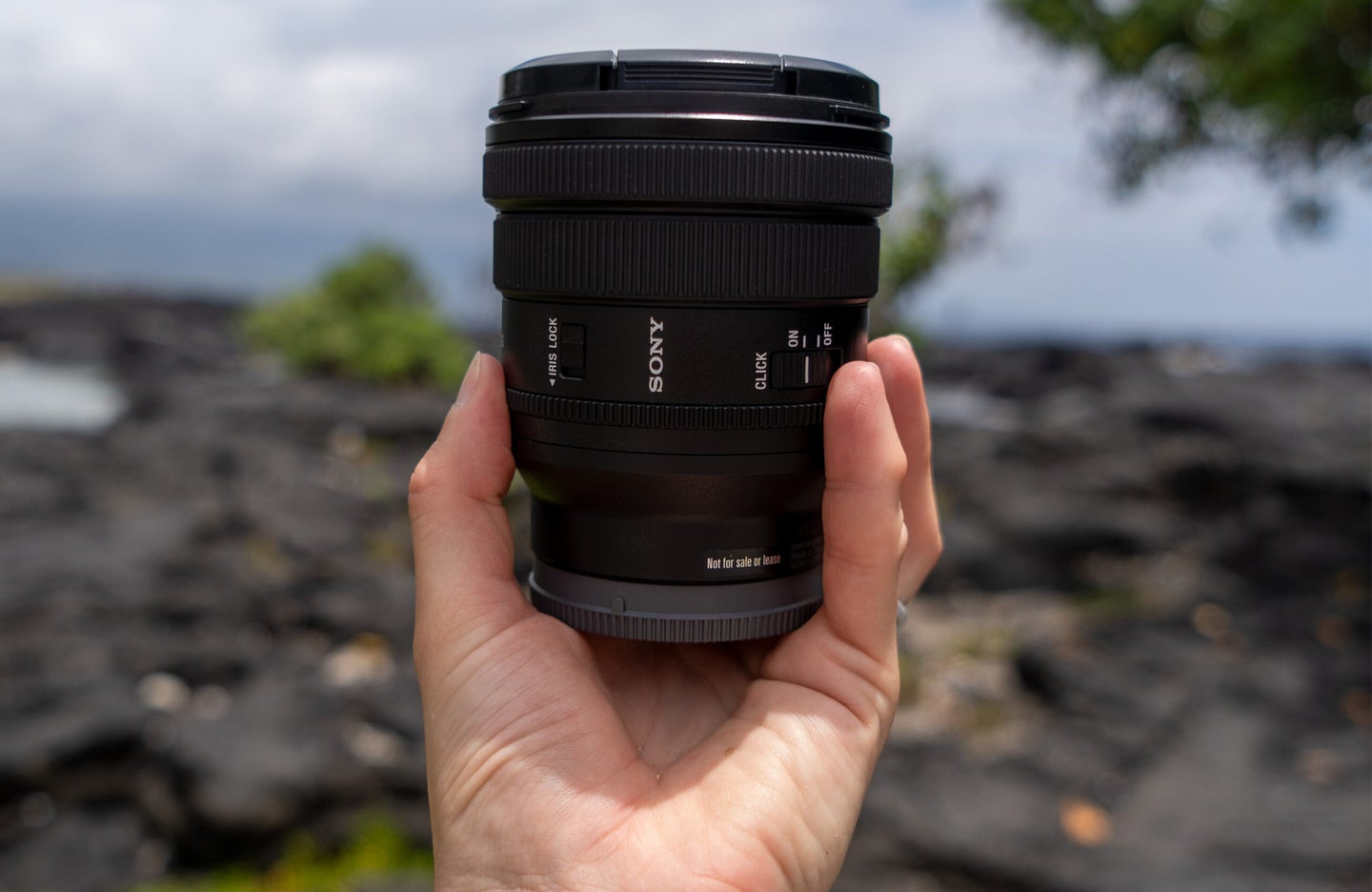 The Sony FE PZ 16-35mm f/4 G lens is a full-frame, wide-angle zoom lens for A7-series E-mount cameras. A quick scan of the spec sheet clearly indicates that Sony considers this a true hybrid lens with enough resolution for high-end still photography as well as some video-specific features. Classified as a G lens, a step below the Sony lenses’ gold tier G-Master line, it comes at a reasonable price while still producing quality images.

I spent a few weeks with the lens, shooting both stills and video of various subjects and lighting conditions. I was really impressed with it, especially given the price. It hits a sweet spot for hybrid shooters, with smooth focusing and zooming that makes recording easier, responsive autofocus, and sharp, high-quality still photos. It’s especially ideal for those who are either just getting started or don’t want to drop a fortune on a lens. And it’s extremely lightweight, making it an easy lens to have on you.

The first thing that struck me when taking the Sony 16-35mm f/4 G lens out of the box was how light it is. This thing is seriously lightweight, especially for its size. It weighs only 12.5 oz, which means that even when paired with the full-frame Sony a7iii, your kit will come in at only 2.2 pounds. That’s roughly the same as just the body of my older DSLR.

In terms of size, it measures just 3.17 x 3.5 inches, which is quite compact for a wide-angle lens. It fits easily into smaller camera bags, making it convenient to bring along on shoots or trips. If you are going to be on your feet carrying your camera around for long periods, say for a wedding or hike, this lens would be ideal.

The Sony 16-35mm lens is dust and moisture-resistant, so you can take it out and about without worrying too much should you encounter adverse weather conditions. A fluorine coating protects the front element from water, fingerprints, and other grime.

The zoom is fully internal on this lens, meaning it doesn’t extend outside the barrel as you change the focal length in. The internal zoom is especially useful if you use a gimbal for video. You can change focal lengths to your heart’s content after balancing it on the gimbal once and not have to rebalance repeatedly.

A cadre of switches, rings, and buttons allow for ample quick adjustments without having to delve into Sony’s often-clunky menu system. You’ll find three rings for focus, zoom, and aperture on the lens body. The focus and zoom rings rotate exceptionally smoothly.

The aperture ring has a nice amount of resistance and clicks at each one-third stop. A switch allows you to turn off the clicks for a smooth transition between apertures, which is excellent for video. Or you can rotate the aperture ring to A and change your aperture via the camera if that is more your style. If so, the Iris Lock will come in handy to lock the aperture ring into place and prevent you from accidentally bumping it to manual control.

Unfortunately, the focus and zoom range have no hard stops–meaning they can rotate infinitely. They also lack markings. While you can see what focal length is in use on the rear display when zooming in and out, I’m not a fan of not having that information on the lens itself, especially with the infinity rotation.

Beyond the three rings, there is a variable speed zoom lever for zooming in and out at a constant speed, handy for video work. There is a focus mode switch for quickly switching between manual and autofocus. And lastly, there is a focus hold button, which you can customize as well.

The guts of the lens include 13 elements in 12 groups. These include a Super ED (Extra-low Dispersion) element, two AA (advanced aspherical) elements, and an ED element to minimize distortion and aberration. Chromatic aberration was essentially non-existent on the images I took with this lens, even in high-contrast situations. There is some visible barrel distortion at the wider focal lengths, though that is expected and can be fixed in editing. The barrel distortion, when zoomed in, was not noticeable at all. There is some fairly heavy vignetting throughout the zoom range, but it doesn’t creep into the image much and can also easily be fixed.

Images from the Sony 16-35mm f/4 are incredibly sharp. Though it is a different focal length range, I compared images from the Sony FE 12-24mm f/2.8 GM Lens to this 16-35mm. The level of detail is pretty much the same to the naked eye, despite the nearly $2,000 price difference.

The lens is also capable of beautifully smooth bokeh, in part thanks to the circular aperture. The bokeh and shallow depth of field possible is also partially due to the minimum focusing distance of just 11 inches at 16mm and 9.5 inches at 35mm. So while it’s definitely not a macro lens, you can get some lovely detail shots with it.

The Sony 16-35mm f/4 features a new power zoom system that is powered by four XD linear motors. These are the same motors utilized by Sony’s autofocus on newer lenses. It also uses two XD linear motors for focus, meaning there are six motors crammed in the tiny package.

As mentioned, Sony designed this lens with hybrid shooters in mind, resulting in many features ideal for video creators. One such feature that is extremely handy is the lack of focus breathing. Focus breathing refers to a shifting in the field of view as you adjust the focus distance, which can result in some jumpy and jarring video results. I didn’t notice any focus breathing whatsoever in the videos that I took.

Focus from this lens is also remarkably fast and virtually silent. In most situations, it pegged focus right away. Even when it did need to search a little bit, you couldn’t hear a thing. These two aspects are also advantageous for video; you don’t need to worry about filtering out focus noises in post if using this lens.

How does it compare to the competition?

There are a few options at this same focal length range for the easiest comparisons. Sony’s FE 16-35mm f/2.8 GM Lens was released in 2017. Despite being a very nice lens, it isn’t as new and lacks some of the features this version has. It is also $1,000 more expensive.

Then there is the Sony Vario-Tessar T* FE 16-35mm F4 ZA OSS, which came out back in 2014. It is roughly the same price is the newly released 16-35mm. Since then, Sony has improved its lens technology. So again, you will miss out on some features and quality aspects with this older version. The benefit of the older version is that it does have three stops of stabilization, whereas the Sony FE PZ 16-35mm f/4 G Lens has none. Newer Sony cameras have impressive in-body stabilization, so if you have a new camera model, that shouldn’t be an issue.

Should you be willing to go with a different focal length, there are some additional options. For example, the Sigma 14-24mm f/2.8 DG DN Art Lens is an excellent lens at around the same price. The Tamron 17-28mm f/2.8 Di III RXD is another strong option, in large part due to its very affordable price. But, with both of these lenses, you aren’t going to get the same video-centric features as the Sony 16-35mm f/4 G.

The Sony FE PZ 16-35mm f/4 G really is an excellent Sony lens choice for a wide range of people. At the top of the list are those looking to do both photo and video work while not breaking the bank. Its range of features and level of quality makes both types of shooting enjoyable and even easier in some ways.

Traveling creatives will also greatly appreciate this wide-angle option because of its compact and lightweight size. It’s light enough that you will hardly notice it in your camera bag. And when on the camera, it doesn’t result in a highly front-heavy setup. The focal length range is also ideal for landscape shots, group shots, and some more unique portraits.