Sporting a sharp 40mm f/2.8 lens, an impressive 24-megapixel APS-C sensor, and a legendary design, the Ricoh GR IIIx is easily one of our favorite truly pocketable cameras. 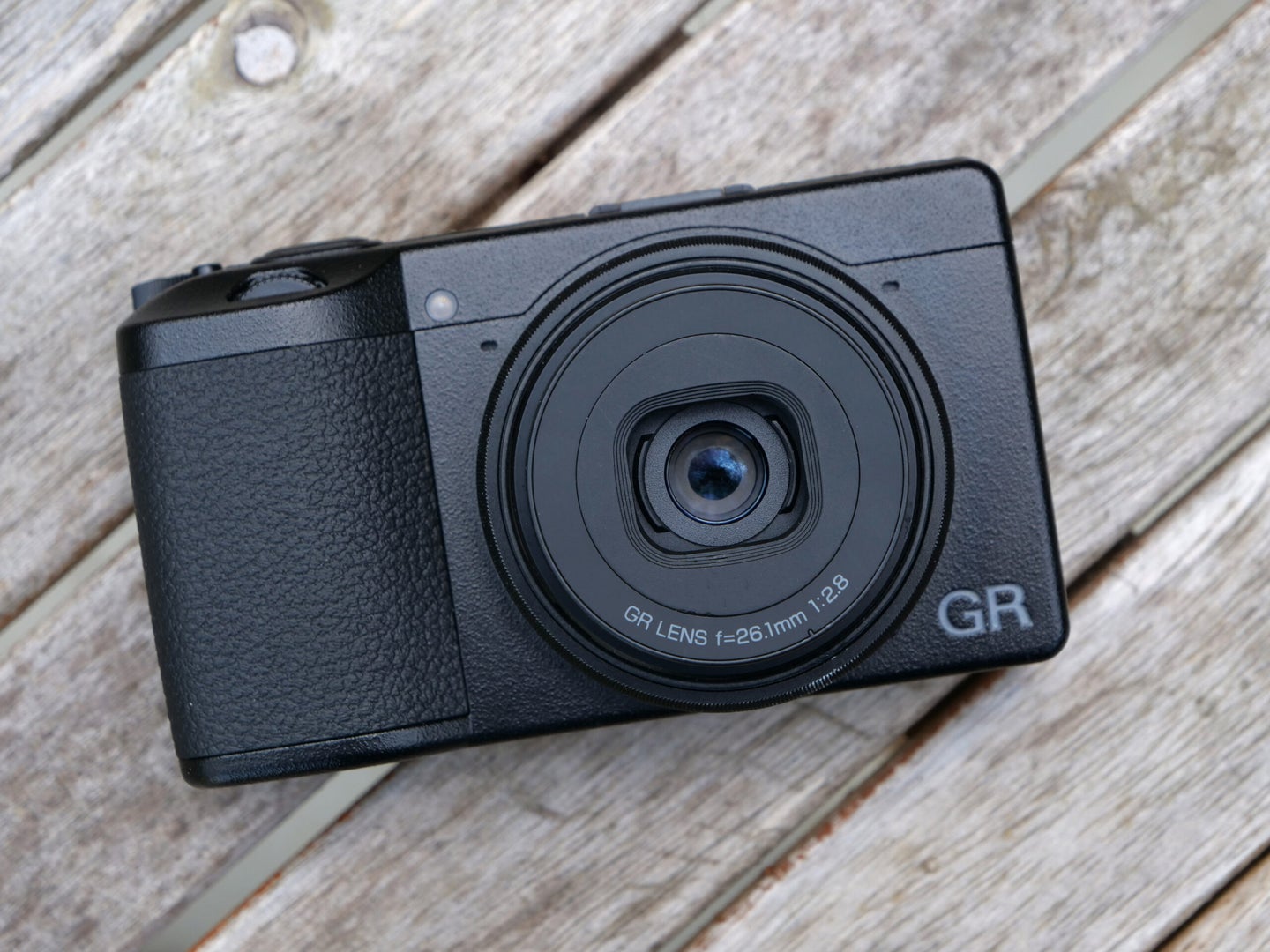 The Ricoh GR IIIx is a pocketable camera with a really impressive 40mm equivalent f/2.8 lens and a capable 24-megapixel APS-C sensor. Image quality is great: the lens is tack sharp all the way across the frame. The camera has built-in image stabilization to reduce camera shake (for stills only), and it works well. The GR IIIx is very small and, as such, controls are a bit cluttered. The LCD is average in terms of size and resolution, and it’s a shame it can’t tilt upward for waist-level shooting.

Negatives are few, though they’re important. The most significant issue we had with the GR IIIx is its battery life: it’s just not good. The movie mode is not impressive but, then again, this camera is not for that market. The only other nice-to-have would be some kind of weather-proofing, but maybe Ricoh is saving that for the GR IIIx Mark II.

The GR IIIx uses the same 24-megapixel APS-C-sized sensor as the GR III. The sensor is stabilized on three axes and can reduce shake by up to 4 stops, according to Ricoh. While it lacks an anti-aliasing (AA) filter, the GR IIIx can simulate having one by shifting its sensor, which helps to reduce moiré, which can be distracting, especially in video.

The real highlight of the GR IIIx is its 40mm equivalent f/2.8 lens, which is also what differentiates it from the vanilla GR III, which has a 28mm equivalent lens. The GR IIIx’s lens can get as close to your subject as 4.7 inches.

The lens doesn’t support screw-on filters, though it has a built-in neutral density (ND) filter, which allows you to use slower shutter speeds or smaller apertures in bright light. An optional teleconverter accessory boosts the equivalent focal length to 75mm. A small optical viewfinder, which attaches via the hot shoe, is another optional accessory.

The camera’s 3-inch LCD has an average size and resolution for a compact camera. Its touchscreen lets you tap to focus, navigate menus, and review photos. Since this is a fixed (non-articulating) display, waist-level shooting isn’t possible. The GR IIIx lacks a built-in flash but there is a hotshoe.

The USB Type-C port is used to transfer images, connect to a display (DisplayPort required), or charge the battery. Ricoh estimates that you can take 200 shots on a single charge, give or take.

The GR IIIx’s shooting experience has changed little since its predecessors, which, to its fans, is a good thing. The compact and well-built body is easy to pocket—yes, even in skinny jeans—and shooting one-handed is no problem. The IIIx has the same pill-shaped shutter release buttons as the generations of GR-series models that came before it. The controls on the back of the camera are cluttered, but that’s the tradeoff for keeping the body as small as possible. The mode dial on the top plate has a lock, though it would be nice to have an option for it to rotate freely.

The GR IIIx starts up quickly, which is how the camera functions as a whole. You can flip through photos or the menus as fast as your finger can move. Speaking of menus, they’re pretty extensive for a compact camera and allow for some pretty extensive customization of the GR IIIx. The camera has two control dials as well as the “ADJ” lever, which is used for exposure compensation and shortcuts to up to five settings.

Composing photos on the LCD outdoors is challenging, but Ricoh came to the rescue with an “outdoor view setting” that lets you quickly adjust screen brightness. Going up by a stop did the job for me.

The location of the video button on the left side of the camera suggests that video is an afterthought on the GR IIIx, and it is. You can capture 1080/60p video, but controls are limited, and the camera is slow when adjusting focus. There is a crop when shooting video, and its electronic shake reduction isn’t the best.

The GR IIIx has both Wi-Fi (2.4Ghz) and Bluetooth built-in. While its app is not well-loved, I had very few issues connecting to and transferring images from the camera.

The GR IIIx’s sensor and lens combo make for excellent image quality. Images are very sharp in both the center and the corners, even wide open at f/2.8. A trip to the local tulip fields illustrated the kind of vibrant colors the GR IIIx produces. The camera offers several color (and B&W) modes for getting a little more creative.

The 24-megapixel sensor inside the GR IIIx impresses, with good dynamic range and low noise at higher sensitivities.

The GR IIIx focuses quickly, and its hybrid (phase & contrast detection) autofocus system is snappy and accurate. The camera stuck to its subject fairly well when using tracking autofocus. If I didn’t want to wait for the camera to lock focus, I could just mash the shutter release all the way down and the GR IIIx would use a predefined distance, such as 2.5m (a little over 8 feet).

If you want to shoot photos quickly, the GR IIIx is not your camera. It chugs along at 4 frames per second and stops after less than 10 shots if you’re shooting Raw (DNG).

At 200 shots per charge, battery life is pretty lousy. If you’re out for the day, bring a spare or a portable USB-C charger.

You can count the number of fixed lens large sensor cameras on one hand. Aside from the Rioch GR III with its 28mm lens, the only other camera in this class is the Fujifilm X100V.  The X100V features a 35mm equivalent f/2 lens and an excellent 26-megapixel sensor. It’s a chunkier camera but that makes room for an electronic viewfinder and plenty of dials. Like the GR III series, the X100V has a considerable fanbase and should be considered if you want a more hands-on shooting approach and have a higher budget.

Another option is to buy a compact mirrorless camera and a fast prime lens. One such option is the Fujifilm X-E4 paired with the company’s 28mm f/2.8 lens (equivalent to 41mm). As with the X100V, it’s a thicker camera, but it offers a viewfinder, tilting LCD, and lots of dials. It does, however, lack image stabilization.

A budget option is the Olympus PEN E-PL10 and Panasonic 20mm (40mm equivalent) f/1.7 combination. The E-PL10 has an aging 16-megapixel sensor that is smaller than the one on the GR IIIx, but it’s still a capable camera with a vast selection of lenses.