Classic film camera review: Nikon FG, the SLR that irked everyone (but me)

This unloved SLR is actually one of Nikon’s most innovative film cameras. And it offers great bang for the buck today. 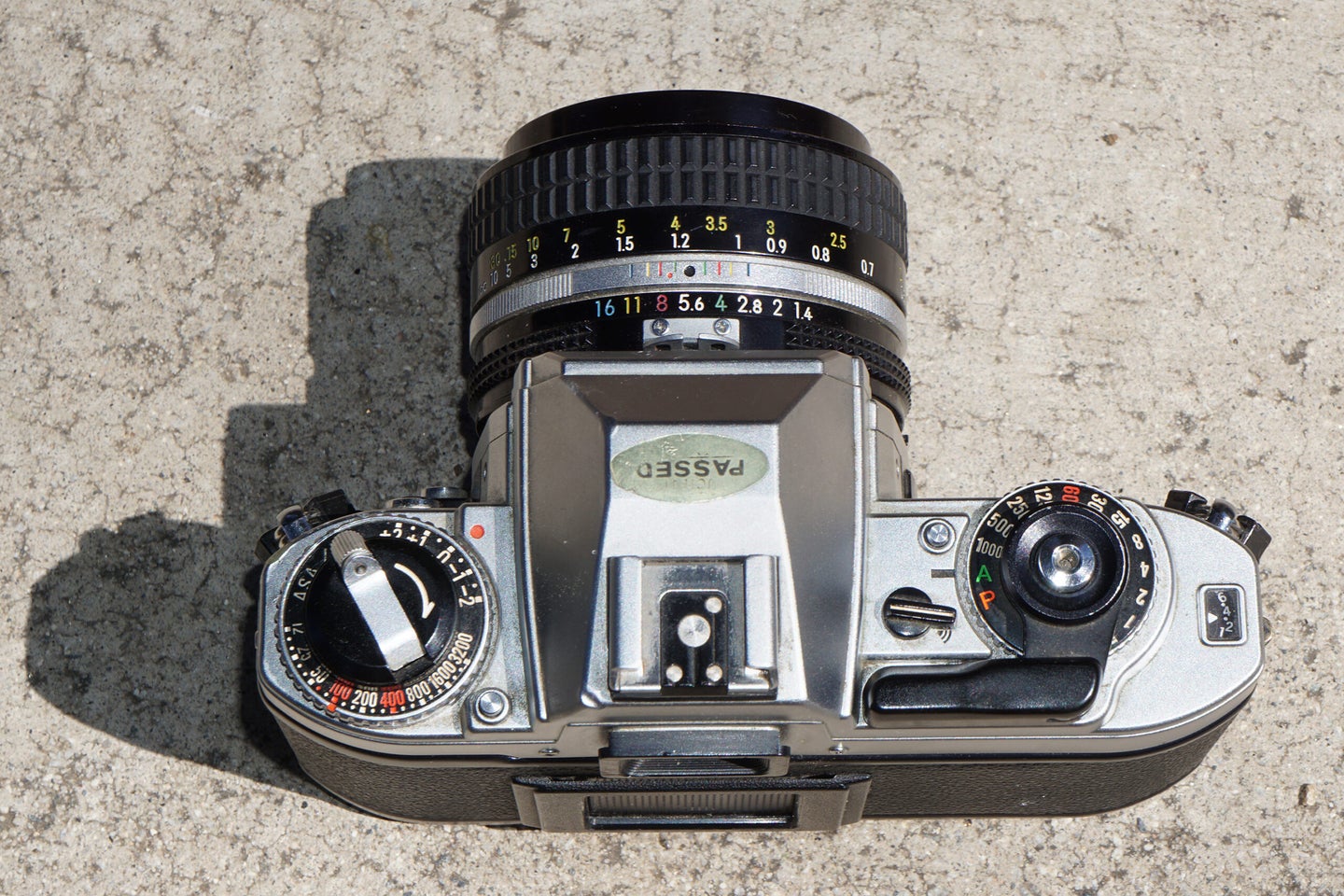 The Nikon FG is a reasonably compact film SLR from 1982. Aaron Gold
SHARE

For reasons I can’t quite explain—my contrarian nature, perhaps, or the inferiority complex that comes with being a Pentax shooter—it pains me to heap praise on Nikon. It’s impossible to deny that most Nikon gear, be it film or digital, is pretty darn good. Still, any time I hear or read someone extolling the superiority of all things Nikon, I can’t help but imagine what they’d look like with a Nikkor AF-D 70-210mm zoom shoved firmly up their left nostril.

There is, however, one Nikon film camera I genuinely adore—and it just so happens to be the one that Nikonians love to hate. Fellow film friends, meet my favorite Nikon SLR: The quirky little Nikon FG 35mm camera.

The Nikon that irked everyone

To appreciate both the FG’s eccentricities and the derision it attracts, it’s helpful to know a little about its history. The FG was the second attempt to market an entry-level camera under the Nikon brand; previously, such cameras were marketed as Nikkormats. The FG’s predecessor is the equally-detested EM, a lightweight, automatic-only SLR introduced in 1979 as a response to compact automatics like Pentax’s ME of 1976.

The EM’s (relatively) cheap price and limited feature set jibed with Nikon’s pro-level snob appeal. Worse yet, Nikon ads touted the EM as a lightweight, low-cost, foolproof camera that delivered the same high-quality results as pro-level Nikons—something that likely did not sit well with those who had invested serious cabbage in their F2 and FE kits. One can only imagine how they felt about the snapshooting masses suddenly joining the ranks of the Nikonisti.

Sensitive, perhaps, to the fan base’s criticisms of the EM, Nikon replaced it in 1982 with the FG, a name that implied closer kinship to other F-series SLRs. And the FG is a surprisingly sophisticated camera: Similar in size to the svelte EM, the FG adds full manual mode (along with the EM’s aperture priority auto mode) and an exposure compensation dial in addition to the EM’s backlight, +2EV button. Like the EM, the FG lacks a depth-of-field preview, but it does have a mirror lock-up tied to the self-timer.

But it was the innovations over and above other Nikon cameras that really set the FG apart. The FG was the first Nikon camera to offer a fully-automatic “program” mode, which set both shutter speed and aperture in stepless increments. It also offers off-the-film (OTF) flash metering, a feature borrowed from the pro-level F3. (It’s worth noting that when the FG-20 replaced the FG in 1985, the Program and OTF flash features were gone, transplanted to the high-end Nikon FA.)

One innovative feature that Popular Photography covered in our July 1983 Nikon FG Lab Report (in which we tore the camera down to its bare frame) is the camera’s last-second metering check. When the shutter is fired in program mode, just after the lens is stopped down—and before the mirror pops up—the FG takes a meter reading to set the final shutter speed. Why? The throw of the diaphragm actuating lever is so short that the FG can’t set the aperture with perfect precision, so this final check allows the shutter speed to be fine-tuned for proper exposure. It’s a work-around, to be sure, but one that allows the FG’s program mode to work with existing AI-series lenses, many introduced half a decade before the FG showed up.

PopPhoto’s response to this nifty new Nikon was favorable. In our First Look at the camera, published in the November 1982 issue, we said:

“The camera was extremely responsive and has an accurate, nicely center-weighted metering system that gave beautifully exposed negatives and slides. In spite of its plastic exterior, the FG felt solid and reliable, with none of the ‘tinniness’ that is sometimes characteristic of cameras this small… All in all, the FG is an extremely flexible picture-making machine that is at once quite sophisticated and easy to use.”

Not good enough for the Nikonians

Unfortunately, the Nikon FG proved to be no more popular than the EM among Nikon fanatics. Pick one up and it’s easy to see why: Smaller and lighter than the FE and FM, it feels substantially less substantial, and not just because of its plastic body. The FG doesn’t have the same mirror-damping mechanism as pricier Nikons, and, like the EM before it, it employs the same Seiko MFC-E shutter used by Pentax, Minolta, and others, rather than the Nikon-designed Copal shutter. Inertia has a field day with the FG: Fire the shutter and it shudders in a way most Nikon SLRs don’t.

The film advance is just plain weird: It has a two-piece hinged lever and a ratcheting design which allows the film to be advanced in several short strokes rather than one big one. Winding it feels like manipulating a broken finger, and when the film is fully advanced, the clutchamathingie that makes the ratcheting action work stops the lever’s travel with a most un-Nikon-like clack. Compared to the refined feel of other Nikons, the FG is more Holga than Hasselblad. It just doesn’t feel like a proper Nikon, and I’m sure that’s a big part of why it alienated the fan base.

Why I love the Nikon FG

That’s unfortunate because those unable to get past the FG’s un-Nikon-like feel are missing out on a magnificent camera. I like my SLRs small and light, and the FG is a significant three ounces lighter than the Nikon FE. While not quite as light as the Pentax M-series cameras—my favorite walk-about bodies—the FG has a better control layout: The edge of the shutter speed dial sits proud of the camera’s front edge, so you can turn it with your shutter-button finger. The exposure compensation dial can also be easily adjusted while looking through the lens.

The meter display is one of my favorites. The FG’s viewfinder has a vertical row of numbers corresponding to shutter speeds. In manual mode, red LEDs light up solid next to your selected shutter speed and flash next to the meter’s recommendation, with arrows at the top and bottom warning of over- or under-exposure. A single solid LED means you and the meter agree. In automatic mode, the LED shows the camera’s selected shutter speed, with a beeper (which can be disabled) warning of shake-prone speeds of 1/30 or less. Unlike a mechanical needle, the LED display is visible even in very low light. Even if it’s too dark to read the numbers, I find I can figure out the approximate shutter speed by the position of the LEDs.

The beauty of the FG is that it works equally well in manual, semi-automatic, and fully-automatic modes, which is more than I can say for my beloved Pentax ME Super (which I find to be great as an automatic camera but lousy as a manual one). Personally, I like the FG even better than my Nikon FE, which is supposed to be the superior SLR. The FG isn’t as refined, but I find it a lot easier and faster to use.

And, of course, the photos that come out of the FG are just as good as what an FE or FM –or even an F2 or F3—can make, because they’re all shot through those lovely Nikkor lenses. And while I don’t own any, I’m told that the lower-cost plastic-body E-series lenses, which with the EM and FG were often bundled, also do an excellent job.

And yet it’s still the Nikon that Nikonians dislike

The odd thing about the FG is that even now, forty years after its introduction, it is still reviled by some of Nikon’s fan base. The FG has a reputation for fragility, though this seems to be propagated by folks who don’t trust cameras with electronic shutters (which is a little like keeping your money in a mattress because you don’t trust banks). I’ve seen little evidence that reliability is any more of a problem for the FG than any other electronic Nikons. In fact, having read through hectares of online reviews and forum commentary, it strikes me that most of the people who bag on the FG haven’t actually used one. Actual FG owners, what few of us there are, mostly love the li’l critter.

Still, this unfair tarnishing of the FG’s image has created a great situation for would-be Nikon shooters who are put off by price: The FG remains a bargain among manual-focus Nikon SLRs. While working FEs frequently sell in the $100 to $200 range, and FM-series cameras for even more, it’s still possible—easy, actually—to find an FG in good condition for well under a Benjamin. The same goes for the FG’s replacement, the FG-20. Though it lacks all of the FG’s features, it’s still a great (and greatly underappreciated) Nikon SLR. Of course, one still has to contend with the high price of Nikkor lenses, but the savings the FG offers over the FE should cover the cost of a light-weight Series E 50mm f/1.8, or get you most of the way to the lovely Nikkor 50mm f/1.4.

Will the FG ever get the love it deserves?

I imagine that the Nikon FG will never be fully embraced by Nikon fans, and much as I would like to dismiss those who turn their nose as snobs, the truth is that I cannot blame them. There is a level of polish and sophistication that one expects from a Nikon camera, and the FG doesn’t meet that standard. Shoot with a Nikon FE or FM and you can understand why they command such high prices. Shoot with an FG and you can understand why it doesn’t.

But that doesn’t change my opinion that the Nikon FG is a brilliant camera. I’ve been shooting with the FG for far longer than I’ve been writing for PopPhoto, and what my forbears at this publication said about the FG four decades ago still holds true today: It’s a flexible picture-making machine that is at once sophisticated and easy to use. Nikon fanatics may not hold the FG in high esteem, but I sure do.

Below you’ll find a selection of sample images from the Nikon FG. Note: All shots were hand-processed and scanned.