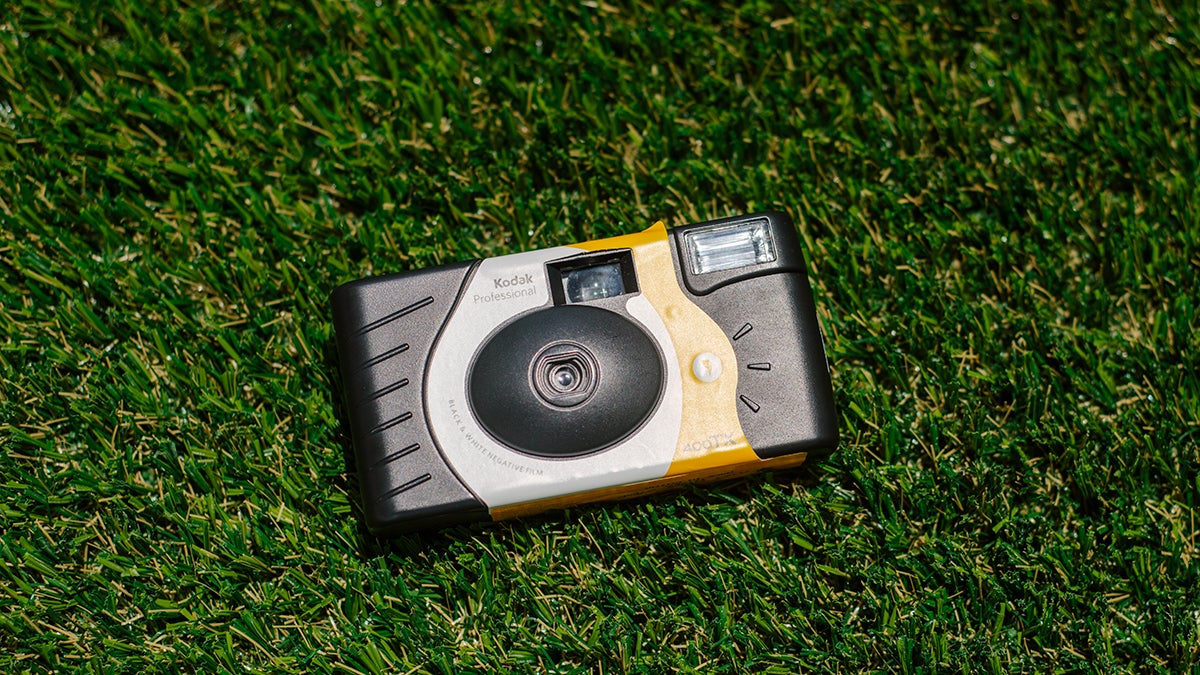 In December of 2021, photography giant Kodak Professional announced a new disposable camera option. Instead of packing it with consumer-grade color film as it does with most of its other disposable offerings, Kodak Professional loaded up rolls of its iconic Tri-X 400 black-and-white film. This classic stock has been a staple in the film photography world for decades, in part because it is so flexible. It also has a nice punchy contrast for a black-and-white film, appealing to many. I was able to get my hands on one to shoot around with and put it through the paces.

The camera itself is a standard disposable–meaning single-use–option. It has a plastic, fixed focus lens that can focus as close as roughly four feet. While it technically focuses to infinity, subjects are sharpest up to about 10 feet. The Tri-X disposable also has a fixed f/10 aperture and a single 1/125th of a second shutter speed. All of the fixed settings are one of the reasons disposable cameras are so approachable and suitable for those who have perhaps never shot film before or don’t have photography experience in general.

The only setting you have control over is whether or not to use the flash. It powers on with the push of a button on the front, and when it’s ready, a red LED on the top of the camera will light up to let you know. It charges up quickly, so you aren’t stuck waiting on it to get ready. It is pretty powerful, making it possible to take photos indoors or in low-light situations, which wouldn’t be possible otherwise due to the 400 speed ISO and f/10 aperture.

Typical of disposables, it is made of plastic and is very lightweight. It still seems pretty durable, however. I went on a trip with it and had it either shoved in my purse or the side pocket of my camera bag, and it held up just fine. The flash button did get pressed once without realizing it before taking an image, but I didn’t take any accidental exposures, so I call that a win. Though by no means hard, you definitely have to press the shutter with intent, which is nice.

The images possible from this disposable really are quite nice. The photos turned out sharp for a disposable. They’re not meticulously sharp, but that’s not the point. Once you embrace the imperfections, you will have much more fun and enjoy the pictures more.

True to classic Tri-X film, the contrast is nice and strong, though not heavy handed. I find this film to have the ideal amount of grain. It is noticeable but not obtrusive. It also didn’t increase at all when using the flash, which was nice to see.

Because of the flash, the camera is usable in a wide variety of shooting scenarios. I took a few indoors on a cloudy day, and the flash filled things in nicely without being overpowering. It handled high contrast scenes well, but darker scenes like under the big trees of a botanical garden also look nice.

I have to admit, I was quite excited when I heard that Kodak Professional was releasing something new for film users. Though I don’t shoot film as often as I once did, I love to hear of new developments (no pun intended) instead of the discontinuation of products and films. Plus, disposable cameras are a great film introduction for people who have never shot analog before, so having an option like this is exciting. You can produce attractive images on this thing without much skill or knowledge, so if you are looking to dip your toes in the film waters, this camera is a great way to do so.