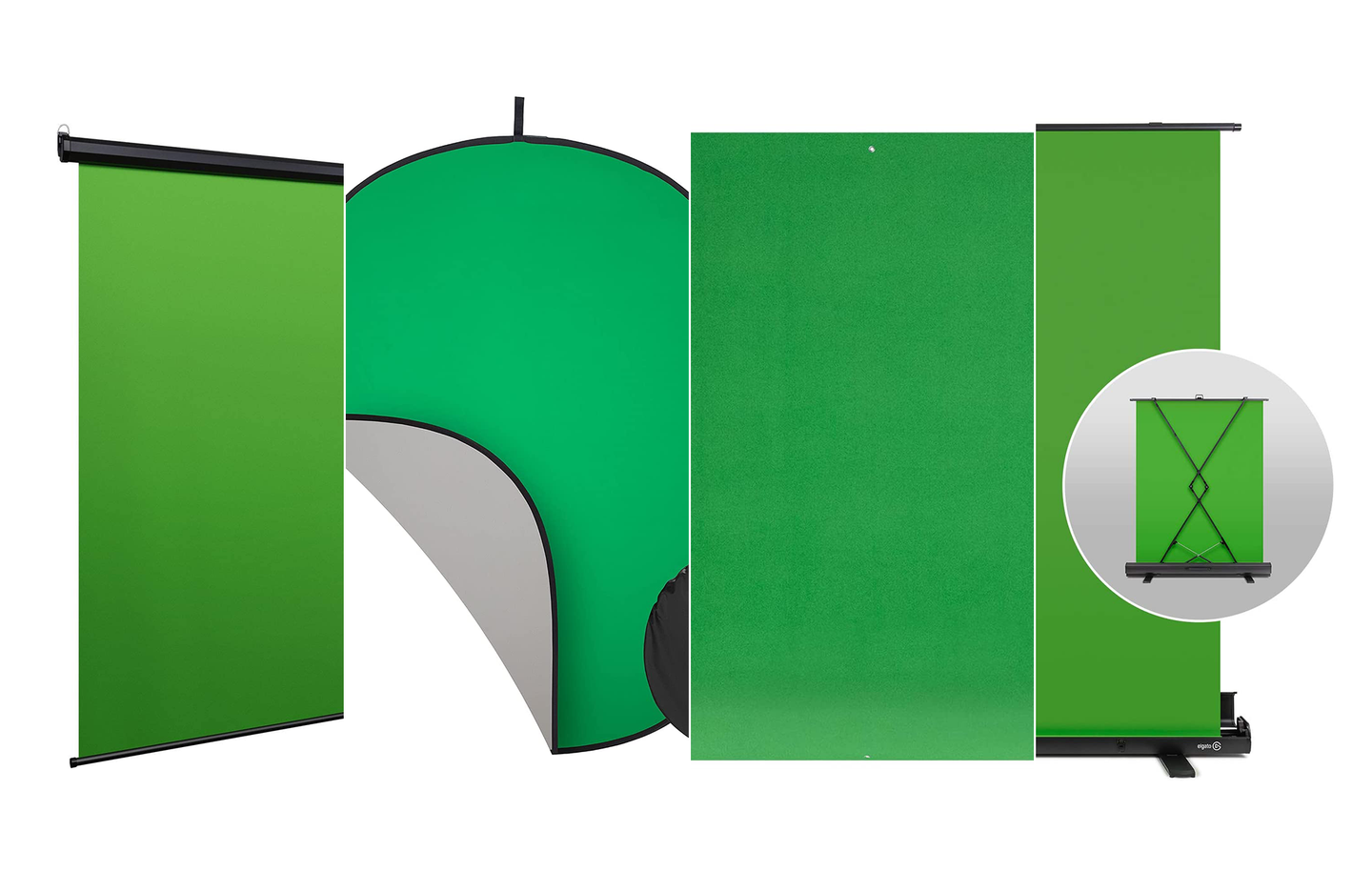 These bright backdrops make it easy to transport photo and video subjects to far away lands.

Green screens can be incredibly useful tools for both photographers and filmmakers. Because these bright backgrounds are a far cry from the natural tones of skin, hair, and most clothing, it’s easy for photo and video editing software to grab onto the green color and remove. You can then replace that removed area with whatever background you’d like. Transport your subjects to space, the bottom of the sea, or maybe Delaware. Choose the wrong green screen, though, and your high-end production can look about as good as a no-budget cable access show. This list of the best green screens will help you choose the right model for your creative work without requiring a Hollywood-grade budget.

Things to consider when shopping for the best green screens

In its most basic form, the green screen is little more than a simple green sheet. You can make do with just about any model, but buying something that fits your specific needs will make life a lot simpler later on in the editing process.

Before you choose a size for your green screen, you should consider what you’re planning to do with it. If you’re trying to shoot outside and replace an entire scene, then you’ll want the biggest screen you can get. The same goes for applications that will require photographing multiple people in front of the backdrop like a photobooth. These large options can be seven or even eight feet wide and 10 or more feet long. That extra real estate can really come in handy if you have the room for it.

If you’re only planning to photograph one person at a time or you want a green screen for your live streaming setup, then you’re probably safe with something considerably smaller. That will save you money and room.

Some green screens rely on fabric while others employ materials like nylon. The latter can take more abuse and is simpler to clean, but the former will cut down on reflections. A green screen that throws too much light back at your subject can cause ugly green tints on your subjects, which really hurts the overall effect.

If you go with a fabric option, you may also want to invest in a steamer to get the wrinkles out of it. The smoother the fabric is, the easier it is to light evenly. That makes pulling out the green tones in post much easier. Ten minutes of steaming before the shoot can save you hours in editing later.

Collapsible green screens make it very simple to pop open and start shooting. They’re usually smaller than their stand-alone competition, however. You may also need an assistant to hold onto them since the collapsible models are typically very light for easy transport. Some collapsible backdrops have various mounting hooks, loops, and grommets for attaching to a stand.

More traditional backdrops rely on a pair of stands with a crossbar that holds the fabric. These are often larger and more versatile during the actual shoot, but they require considerably more setup and bulk when it comes to lugging them around. A green screen isn’t much use if it won’t fit in your car or shooting space.

Do you need a kit?

Photographers or videographers who are starting from scratch may be tempted to buy an entire lighting and support kit with their green screen. These often come with low prices and little hassle. With a few exceptions, these are generally cheaply made. That’s totally fine for occasional use or just for setting up a photo booth at a party. But, if creatives looking to get regular use out of their setup, it’s worth buying lights, stands, and backdrops separately.

If you do hop into a kit, look for one with pieces that you can use elsewhere if you upgrade your backdrop setup. I use old backdrop stands as small light stands in my studio. I also use an old backdrop stand bag to carry gear to gigs sometimes.

Why it made the cut: This convenient screen is easy to transport, doesn’t need external stands, and won’t require ironing.

You may know Elgato for its excellent streaming gear and this portable greenscreen falls partially into that category. Right out of the box, this greenscreen comes rolled into a convenient tube that’s simple to move around. When it’s time to shoot, put the tube on the ground and pull the screen out. As it unrolls, the X-shaped brace in the back of the screen will expand until it locks into place and creates a 58” x 71” greenscreen that you can use just about anywhere. It weighs 20.5 pounds, which isn’t exactly light, but it’s a lot easier to deal with than a bag full of stands and a cross-bard.

Because the screen stores in a neatly wrapped tube, it comes out nearly perfectly flat and doesn’t require steaming or pressing like a fabric model will. The Elgato’s polyester screen material can withstand some punishment, so you can use it on-location if the need arises.

The size isn’t huge, but it’s plenty big for a streaming setup or even a photo booth for one to two people.

Why it made the cut: This 9’ x 10’ screen offers enough coverage for a full-on studio shoot.

If you want a more traditional green screen setup for a studio, this 9’ x 10’ rig offers plenty of space in which to work. The screen itself is a sheet of wrinkle-resistant polyester that folds up neatly into a carrying case. You may want to hang it out for a bit before you shoot to let some of the wrinkles fall out.

If you already have a studio setup for paper seamless or other backdrops, this screen will fit easily into it. The 10-foot length extends it all the way to the floor, which is hand if you’re doing full-body shots that include people’s feet.

The anti-reflective material will cut down how much light bounces off the backdrop and onto your subjects to mitigate the ugly green color casts.

Why it made the cut: It’s handy as a green-screen, but the other side offers a gray surface for more traditional shots.

If you’ve ever used a collapsible reflector, then this pop-up backdrop should feel very familiar. The nylon fabric stretches over a metal frame that twists up for easy storage in a bag that’s roughly the size of a medium pizza. Unfolded, however, it provides a 5’ x 6.5’ surface that’s green on one side and gray on the other.

Because of its collapsible design, this backdrop sets up in roughly one second. Once unfolded, it has a built-in loop for attaching it to stands if you don’t have an assistant to hold it for you.

This kind of backdrop tends to stay moderately flat, but you may want to leave it unfolded for some time before you shoot if you want the wrinkles to subside a bit.

Why it made the cut: Mount this greenscreen behind your streaming rig and you’ll never have to worry about putting it away.

If you’re using a face camera on your live streams, a green screen can really up your production value. It can block out the background completely or make it look like you’re in some cool location.

This roll-up Elgato option is basically the same model as our best overall pick, but this one mounts directly to a wall or ceiling via a mount or suspended hooks. Think of it like those projector screens on the wall of a school.

When it’s time to stream, simply pull it down and it’ll lock into place. When it’s time to put it away, a simple tug will cause it to automatically roll back up into its hiding place. Because it stores in a neat roll, it’s always flat and mostly free from wrinkles. It’s made of tough polyester, so it might even survive if you throw a mouse or keyboard at it in a fit of game-induced rage. Even if you’re not a gamer, this can be a very handy tool for people who spend a lot of time vlogging or on video calls.

Why it made the cut: It has everything you need for making green screen content for a very low price.

If you’re just dabbling in studio and green screen shooting, or you want a setup you can abuse without worrying about, then this kit has everything you need and probably more. It comes with stands and a crossbar to hold up the included 6’ x 9’ green, black, and white backdrops. It also comes with four light stands with CFLs, a pair of shoot-through umbrellas and a pair of soft boxes. Neewar even included clamps to keep the backdrop flat on the stand and a carry case for moving everything around.

While this kit has everything you technically need, know that the individual elements aren’t going to offer much in the way of quality construction. Baby this gear and it will last for a while, or abuse it with the understanding that the whole thing cost you $200.

It’s a great starter setup if you’re not ready to spend huge bucks on a full-fledged studio outfit just yet. And some of the pieces could come in handy down the road as backups even after you upgrade.

This is also a solid option if you’re looking for a gift for your photography friends.

Q: What is the best type of green screen material?

If you’re looking for durability and simplicity, then polyester provides a nix mix of ruggedness and performance. Cheaper fabric models are good in a studio setting, but they take more work to keep wrinkle-free and they’re harder to use on-location.

Q: How do I set up a cheap green screen?

While many of these options come with stands or self-supporting frames, you don’t really need any of that if you don’t want it. Grab a roll of gaffer tape and tape a green backdrop to the wall behind you. It’s not elegant or portable, but it’ll probably work as long as you use the right lighting. Beyond that, make sure your video editing software can easily pull out a green screen from a scene.

Q: What is the best green screen size?

Most start around five-feet wide, which is about as narrow as you want to go, even for shots with just one person. If you’re shooting a group or you want something big enough to get full-body shots with, you’ll want to go even bigger like 9’ x 10’. Essentially, you want as much coverage as you can fit in your space.

I have been a professional photographer and camera journalist for more than 15 years. I have also shot a fair bit of video content both personally and professionally. That experience includes working with just about every type of green screen. We compiled this list based on personal experience, spec comparisons, professional reviews, and user feedback. We focused on choosing models that are versatile and accessible for people shooting content without a big Hollywood budget available to them.

Elgato may be relatively new to the green screen market, but it has shown that it really knows how to make a bright background. If you’re planning to do a lot of green screen content, it’s worth making an investment now because the right gear can save you hours and hours in front of an editing program.