The best (and strangest) drone photos of 2021

From epic surf shots to nightmarish landscapes, these are our favorite winners and runners-up from the 2021 Drone Photo Awards. 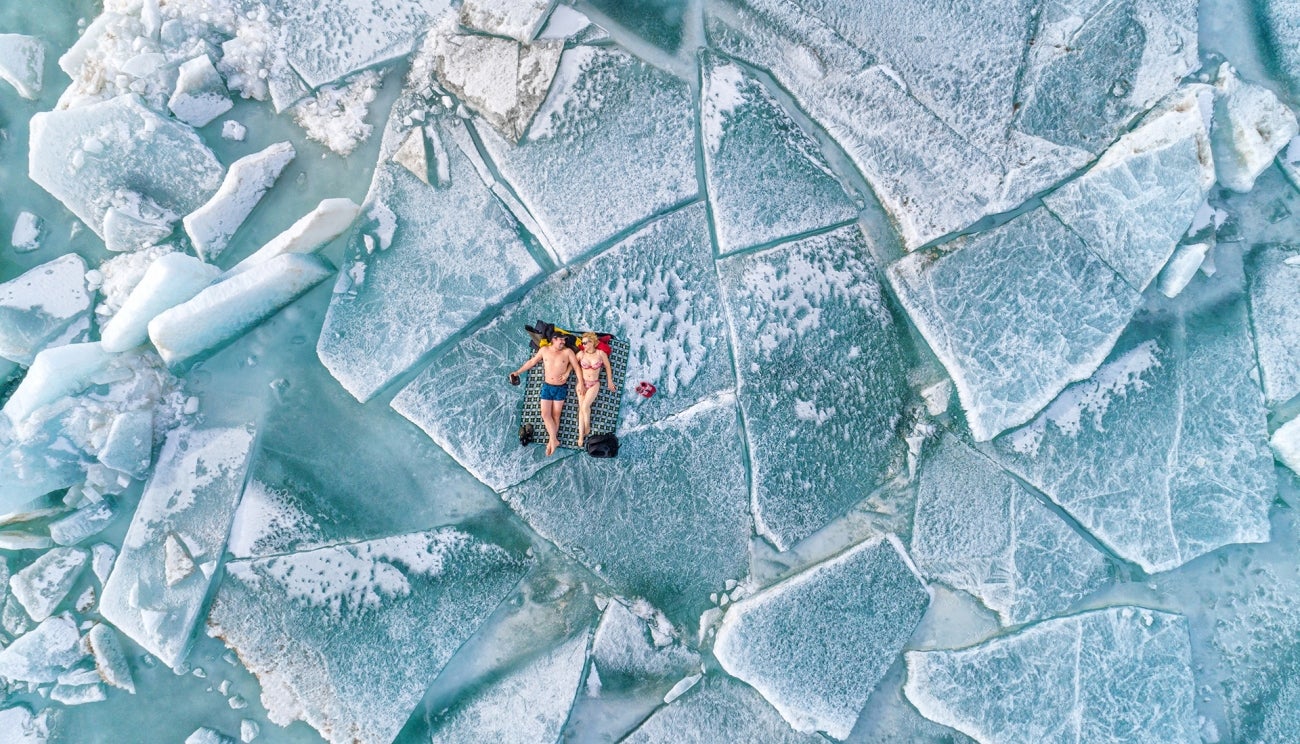 Runner up from the "People" category - 2021 Drone Photo Awards
Title: Beach Season
Description: "I took this picture in February 2021, on ice hummocks at the Kapchagay reservoir in the Almaty region of Kazakstan. The air temperature on that day was -10 degrees Celsius; for our region and season it could be said warm, and so, without waiting for summer, we decided to open the beach season!". Alexandr Vlassyuk
SHARE

The winning images from the 2021 Drone Photo Awards are live and we’re frankly, blown away. Going on four years strong, it’s among the largest and most well-respected international aerial photography contests.

And while the majority of shots featured in the gallery of winners and runners-up were captured using drones (check out our roundup of the best beginner drones), contestants could make use of a wide variety of methods to get an aerial perspective, from helicopters to kites, airplanes to balloons.

The contest is open to all, regardless of whether you are a professional or amateur. And submissions came from all over the globe. This year’s individual categories include: Urban, Wildlife, Sports, People, Nature, Abstract and Wedding. Additional categories include Series (for multi-image stories) and a Video category.

If some of those categories seem a tad repetitive to you, we’d have to agree. For instance, quite a few of the featured images in the Nature category easily could’ve easily fit into the Abstract one, and vice versa. Similarly, there seemed to be a bit of overlap between the Wildlife and Nature categories. But category-related quibbles aside, the results from this year’s contest are breathtaking nonetheless.

Drone Photographer of the Year

Of all the images entered, the judges crowned one overall winner the “Drone Photographer of the Year.” That image (above), by Terje Kolaas, shows a large flock of geese taking off and heading north for the spring. A breathtaking shot for sure, it’s just one of the many inspiring and/or mesmerizing entries. It also touches on the theme of global climate change, making it particularly impactful and relevant.

Scroll down to see our other favorites. And head to the bottom of the story to find out how you can enter next year’s contest.

Environmental issues, including toxic water runoff from industrialization, proved to be a popular topic among this year’s contestants. And this shot, from Manuel Enrique González Carmona’s series of abstract nature images, was by far our favorite that touched on the subject.

The series shows the impacts of the mining industry on the natural landscape. And it’s the type of image that both catches the eye while also conveying the details of an important story. It’s both beautiful and horrifying at the same time. No wonder it came in second place in the “Series” category (view the other shots from Manuel’s series here).

Another one of our favorite images came from Sergei Poletaev. He captured the contrast of a 500-year-old Russian monastery against the backdrop of powerplant cooling towers as they churn out steam and fill the sky with dark ominous clouds. It’s a nightmarish-looking photo that makes the landscape appear almost dystopian.

The strength of our planet was also on full display in this year’s contest. Below are a handful of winning images that show off its unbelievable power.

Captured off the coast of Australia, Phil De Glanville’s category-winning shot is magnificent for quite a few reasons. For starters, the sheer scale of the wave, compared to the surfer, requires a moment for pause. And the surfer’s calm demeanor and red wetsuit add a nice contrast to the surroundings. Lastly, the tiny rainbow, likely formed from the ocean’s spray, adds something extra special to the composition. This one may be our overall favorite of the bunch.

Martin Sanchez’s winning photograph of a volcano blowing out magma is another one that shows off the insane power of our Earth. Captured in Iceland, it offers a truly unique perspective of an event few of us will ever see with our own eyes. We just hope he had insurance on that drone!

Juxtaposition and subject matter play an important part in many successful images. And Khanh Phan’s shot of individuals harvesting tall grass in a wind-swept sea of green is a perfect example. You can almost hear the grass swaying in the breeze just looking at the image. And the contrast of the workers’ red, blue and orange outfits plays nicely against the backdrop.

Abstract patterns from above

Something we love about drones is the fact that anyone with the passion and a few hundred bucks can go find a new perspective and create something beautiful (with practice, of course). And many of our favorite images show a bird’s eye view looking down. This method of shooting often results in intriguing photos filled with all sorts of mesmerizing shapes and patterns.

Ran Tian’s shot of rice terraces in China is one of those images. Not only does it make us want to visit the location, but it’s also easily one of the most beautiful photographs from the entire contest.

Another bird’s eye shot–with a completely different subject matter–came from Raf Willems, who pointed their camera at concertgoers attending a floating performance. It’s an image that looks cool from far away, but also contains a lot of intricate details when you get close.

And finally, we’re big fans of the below shot, showing boats stored along the river Buriganga in Bangladesh right at the start of the 2020 global pandemic.

Some of our other favorite images from the contest include the winner of the wildlife category (below), a dreamy Dubai cityscape, and an amateur boxing match held in the middle of a shuttered market.

Next year’s contest will start accepting entries in early January of 2022. In the meantime, signup for an account with the Siena Awards (they run the contest). And get out there and start shooting! If this year’s winners are any indication, the competition next year will likely be stiff.