Capturing thrill seekers through the ages. 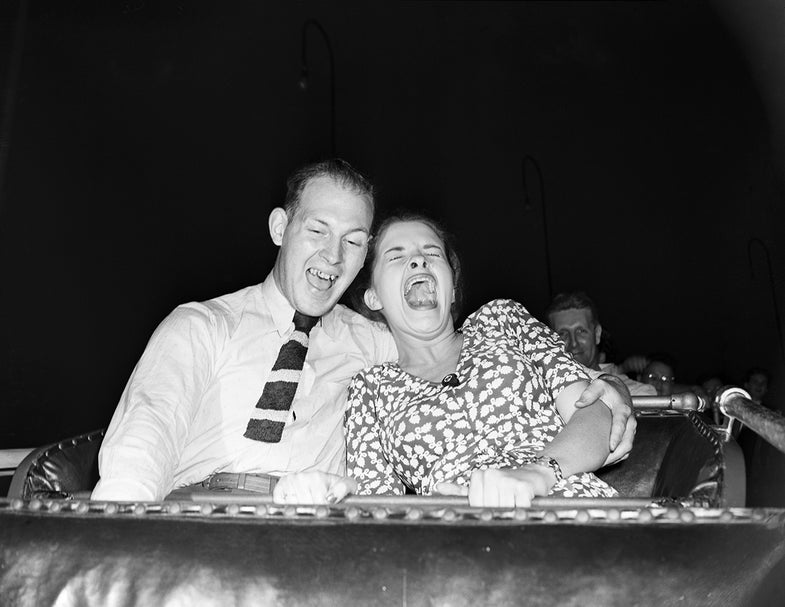 There are few things quite exhilarating as the thrill of a very good roller coaster. The way your heart races before you hit that first drop and the laughter and/or terror screams as endorphins pulse through your body as you whip around the track for approximately a minute is either euphoric or horrifying depending on who you ask. The last crucial piece of the thrill ride experience is a stop at the photobooth to laugh at whatever ridiculous face you might have been making during the most thrilling part of the ride. “We’ve come up with a highly technical term that we call the OSP, which stands for the ‘Oh Shit Point,’” says Tony Sinkosky, CEO and President of Get the Picture Corp, a ride photography business based in Pennsylvania. “There are so many points on a roller coaster where you are going to get absolutely tremendous facial expressions or negative G-forces where people’s hair is up in the air. Essentially you want to find a place on that ride where you are going to get a real good reaction.”

Thrill Ride Photography in the 19th and 20th Century

Photography has existed almost as long as roller coasters. Both were early attractions in seaside resorts like Coney Island and Asbury Park. It’s no surprise that the two mixed.

The earliest images of roller coasters were often taken from a distance, with photographers focusing on the architectural structures of the rides rather than the expressions of the riders. The reason is likely twofold: early field cameras were too slow and bulky to bring onto the ride itself. And the coaster structures themselves were new and novel enough to make exciting subjects from a stable, comfortable viewpoint.

It wasn’t until well into the 20th century that photographers began focusing on the wild expressions of the patrons. Cameras were smaller by then and photographers working for newspapers or the amusement park’s publicity department could now bring gear along for the ride and shoot during the journey. Photos from the ‘40s and into the early ‘80s capture riders with a wide angle lens and from a perspective of just in front of the thrill seekers.

Thrill ride photography as we know it today is instantaneous. Seconds after de-boarding a ride, riders can see their faces on a screen and walk away with a print, keychain, or t-shirt faster than you can get a churro. This concept started with the log flume in the ‘80s.

The Introduction of Instant Gratification

In the late ’80s amusement parks began installing ride cams on their most popular roller coasters. According to Sinkosky, who started his business Get the Picture Corp around this time, parks like Disney and Cedar Point in Sandusky, OH were some of the first places to offer the service. He recalled having helpful conversations with people in the ride photography departments at both parks before launching his company in 1987.

Sinkosky says speaking with both parks helped him understand the risks involved and the potential for profit. “[Cedar Point] told me ‘if I could afford to have this on every ride—I would,” he says.

His company’s earliest camera for ride photography was a ProMavic with a mechanical shutter that was designed to continuously fire as a ride came by. “We were grinding through these cameras at a rapid rate,” he says. The constant shooting took a toll on the mechanical parts.

Lighting was another early issue for Sinkosky. Initially he could only operate the cameras in broad daylight. “At that time there weren’t any strobes out there that could keep up,” he says.

Eventually his company installed continuous lighting on the rides with cameras and switched to video technology, which allowed them to pull frames featuring all of the individual riders. He developed proprietary software with his business partner Bob Hench to get the images from the camera to transfer instantaneously to a computer in the photobooth outside of the ride. “If we were going to survive in this business we had to become a pretty integrated shop,” he says. Printing the images still took about 3 minutes, but it was the birth of the ride photography business as we know it today.

According to Michael Shearer, Vice President of Systems & Engineering at Get the Picture Corp, these days most thrill ride photography companies are using a combination of gigabit cameras and high speed firewire cameras. For strobes the industry standard is a product from Unilux called The Big Shot—a weather resistant inspection light that can fire every 33 milliseconds and has a recycle time of 12 seconds.

Where things tend to differ is the proprietary software that companies use to get the images from the cameras to the computers down below. “Twenty years ago we were essentially inventing everything: scavenging parts at radio shack, soldering things together, but now it has become a little more commoditized,” Shearer says. “But there is still a little bit of secret sauce in the signal processing, the interface circuits and certainly in the software.”

The cameras of today have digital shutters and according to Shearer are incredibly reliable, and often end up lasting for years at a time. “Usually the determining factor for when a camera gets replaced is when the ride is struck by lightning and we have to swap one out,” he says. “The latest system that we use is even pretty resilient to that, but back in the analog days, if there was lightning anywhere nearby you would have problems.”

On a high speed ride cameras are typically firing at about 1/4000 of a sec, on a slower water ride the camera may fire at 1/500 of sec.

Although some companies have began to dabble with offering riders video footage or animated gifs from the ride, according to Shearer, customers like to keep it simple.

“We’ve found the bread and butter of the industry is the still photograph,” he says. “There is something about it that people really love.”